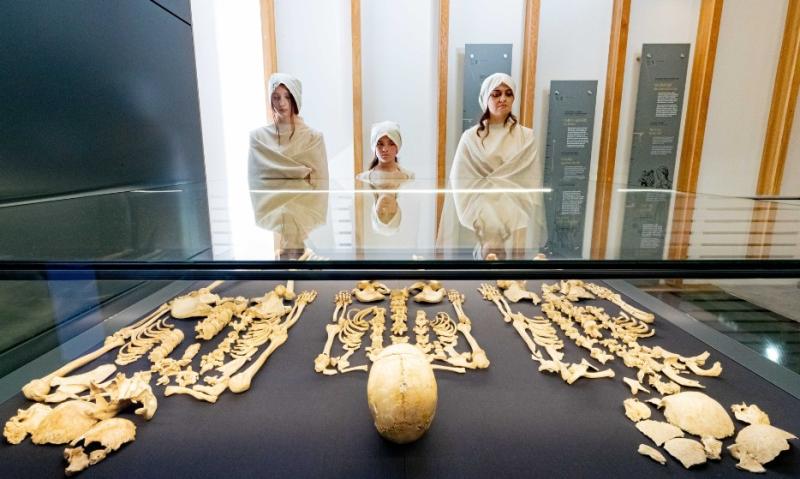 When 22 skeletal remains were discovered three summers ago during excavations at the entrance to Kilkenny’s Medieval Mile Museum, it resonated with the public who came to watch archaeologists painstakingly uncover the findings.

Now, following a €90,000 investment by Fáilte Ireland, the remains of three females, concealed for centuries, will be central to a fascinating permanent exhibition that will be officially opened today (Thursday).

The exhibition entitled ‘3 lives, 3 deaths, One Life Unlived’ reveals the secrets of the incredibly tough lives women in medieval Kilkenny endured. The remains of three female parishioners who lived between 1320 and 1640 include a woman in her forties, aged beyond her years; a teenage girl whose short life of toil was written on her bones; and an adolescent who suffered malnutrition. The story of a deceased infant, discovered alongside the female remains, will be told via touch screen.

This exhibition will tell the story of their lives in a captivating way that will provide fascinating insights into how people lived in medieval Kilkenny. The exhibition will be opened by Minister of State John Paul Phelan, who will be joined by Fáilte Ireland’s Jenny De Saulles and the Irish animator, director and producer Nora Twomey of Cartoon Saloon, best known for directing the Oscar-nominated The Breadwinner.

With funding also invested by the National Museum of Ireland, ‘3 lives, 3 deaths, One Life Unlived’ is the result of painstaking work by the museum team, including archaeologist Colin O’ Drisceoil and osteoarchaeologist Linda Lynch to reveal the stories behind the remains. Nine separate pieces of the adolescent skull were pieced together and digitally scanned at Liverpool John Moore’s University to reconstruct her facial features and create a digital portrait of what the 12 year old looked like.

“We have to give the remains dignity and respect. We will never know their names but we can tease out individual stories,” said osteoarchaeologist Lynda Lynch.

The exhibition is one of 19 new technology-driven visitor experiences to open over the coming year across Ireland’s Ancient East as part of Fáilte Ireland’s €2.3million Storytelling Interpretation Grants Scheme.

“When overseas visitors come to Ireland, they not only want to visit these great attractions – they want to hear first-hand the stories about Ireland at that time and the people who lived and worked in the area,” says Head of Ireland’s Ancient East at Fáilte Ireland Jenny De Saulle.

“The new 3 lives, 3 deaths, one life unlived exhibition offers just that – it brings to life Kilkenny’s past in a way that is compelling and emotive.”

Tandem Design, appointees for such notable exhibitions as Titanic Belfast and the 1916 centenary exhibition at the National Museum of Ireland, designed and installed the ‘3 lives’ exhibition. Inspired by concepts of the catacomb and crypt, the outer structure of the exhibit mirrors the construction of the museum’s north aisle, in which it is located.

“The exhibition presents opportunities for discovery-led, multi-sensory and interactive learning. Within, the remains are respectfully displayed and accompanied by minimal but meaningful interpretation. The visitor will feel a sense of exploration facilitated by the design while having the option to choose if they wish to enter the internal space”, says Grace Fegan, Medieval Mile Museum curator.

“Until the mid-1600s, only the very wealthy were buried in coffins. Poorer parishioners’ bodies were put directly into the soil, dressed in a shroud. It is ironic that these three parishioners will now be interred alongside the grandiose burial chambers and ornamental tombs of St Mary’s. I think it’s a nice ending to what, for them, must have been a very hard life.”