A day in the life of Grace Fegan 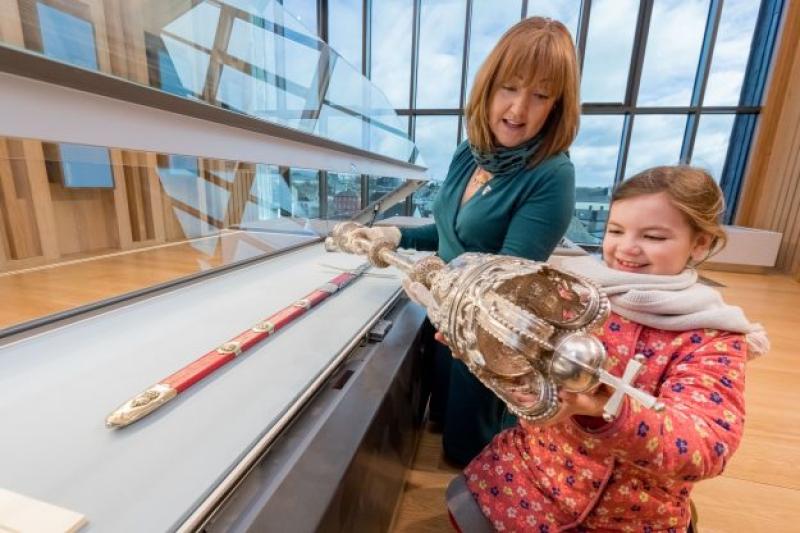 Cork woman Grace Fegan has brought a lot to Kilkenny since moving here 18 years ago.

Grace is the Manager and Curator of Kilkenny’s Medieval Mile Museum since it opened in 2016. She has always had a love for architecture and history.

After graduating from UCC with a degree in Archaeology, she spent some time in the family graphic design business. During the building boom she worked in archaeology on motorways and infrastructural development. In 2001, Grace moved to Kilkenny to join the Flood Elevation Scheme, where she pretty much worked under the Greens Bridge for many years!

She received her ‘Site Director’ licence at 27 years of age and was probably one of the youngest Site Directors in Ireland at the time. When the boom went bust Grace changed roles and worked as the Sales & Marketing Manager in Kilkenny Design Centre. She was also the Executive Manager in Rothe House before Kilkenny’s Civic Trust hired her for the Medieval Mile Museum as Manager and Curator.

Grace recently launched a very moving exhibition in the Medieval Mile Museum - 3lives, 3 deaths, One life unlived. This exhibition showcases the three bodies found during excavations at the gates of the Museum in 2016.

Grace can you tell us about your day at the extraordinary opening of 3lives, 3 deaths, One life unlived?
Morning – I finished tidying my house in anticipation of my mum coming to stay! Then walked to the museum to check the display and case were working as they should be - adjusted the light levels and made sure the case was clean. Met some visitors and gave them a sneak preview of the exhibition.

Lunch – I can’t remember if I ate lunch or not! It was a bit of a blur. I did pick up some fabric to cover the case and had three interviews with RTE and BBC. Then in the afternoon I met my mum and got my hair done.

Evening – After getting dressed up and having a quick bite to eat with some friends we made our way to the museum and met all the staff of the museum and Butler House who were preparing for the event. When people started arriving it was a wonderful feeling to see all these people who had helped make everything happen. I had to concentrate very hard not to get emotional, as I knew I needed to be able to speak. When it was all done I was able to relax.

You also worked sometime in the Kilkenny Design Centre. What was it like working for Kathleen Moran?
It was a great opportunity. I learned so much about hospitality, retail and tourism. I also learned about Kilkenny and the Castle Yard and I made great friends. Kathleen was a pleasure to work for and such a great lady.

So is Curator and Manager of the Kilkenny’s Medieval Mile Museum the dream job?
It is. These opportunities don’t come along every day. That it came along in the city I chose as my home is amazing.

Who mainly visits the museum?
At this time of year the majority of our visitors are from overseas, and most of them from North America. But in the winter we get a lot of school groups for our workshops and we always get a lot of families, particularly for the LEGO mini figure hunt!

What is the new exhibition about?
It’s about the life of ordinary people living in Kilkenny in the medieval period. We know a lot about the super wealthy and powerful at the time - the Rothes, Shees, Archers and Butlers. But now we are finally telling the stories of ordinary women and children. I hope people will find it poignant and powerful.

The opening itself was very emotional. It was no ordinary launch.
We never wanted it to be an ordinary launch. We wanted to pay our respects to these people and thank them for allowing their stories to be shared.

All the speakers were so touched by what was going on around them - the choir, actors, speeches. There must have been some relief to finally open it to the public.
Huge relief, the whole point of the event was to launch the exhibition as a permanent addition to the Medieval Mile Museum, so getting to see people experience it and interact with it was amazing. It was only when the lights dimmed in the middle of the speeches for the choir to sing that I realised the significance of it all and how the crowd must be feeling to see the three actors representing the 3lives, 3 deaths, One life unlived.

Nora Twomey from Cartoon Saloon wrote a very moving letter to one of the deceased ladies. I don’t know there was a dry eye in the museum after she read it out loud. Who’s idea was the letter?
That was Nora Twomey’s idea. We had asked her to respond to the exhibition and she very kindly agreed. None of us knew she had written a letter. We were blown away.

You had to be mindful of avoid any sort of religious service. Why?
It was a condition of the sale by the Church of Ireland to Kilkenny County Council, that it could never be used for any religious purpose. As the operators of the museum we will always honour that. The last time St Mary’s was used for religious purposes by the Church of Ireland was in the 1950s.
In an odd sense the new exhibition has bought life to the museum. It’s really put it on the map? We think so. There aren’t that many museums, outside of the National Museum, that have human remains on display. This is a great vote of confidence by the national museum in the Medieval Mile Museum.
It’s also getting lots of media attention, we were delighted to be interviewed by RTE and BBC on the day of the opening. We are all so proud that this story is being listened to and picked up by national media. Everyone in Kilkenny should be proud.

Besides the new exhibition, what else is there to see in the Medieval Mile Museum?
So much! As well as the building itself there are magnificent renaissance stone carvings, artefacts that were recovered during the renovation works, Kilkenny’s civic objects like the Liber Primus and sword and mace. Also our fantastic staff!

What does a history buff like yourself do for some downtime?
I like walking up hills! When I’m feeling particularly brave I’ll jump in the sea.

What’s your favourite thing to do in Kilkenny?
I love the Kilkenny Arts Festival. It’s like Christmas for me!

What’s next for Kilkenny’s Medieval Mile Museum?
Heritage Week will see us hold a number of exciting events. We’re really excited about the Antique Toy Roadshow which will be happening on Sunday, August 25. George Mealy from Mealy’s Auctioneers will be joining us as the toy expert.
We are asking people to bring their old toys and games with them and possibly loan them to us so we can put them on display over Christmas time. It’s our first crowd-sourced exhibition so we’re very excited about it.

3 lives 3 deaths, one life unlived is on display in Kilkenny’s Medieval Mile Museum. The exhibition provides a fascinating insight into everyday life in medieval Kilkenny. For more information visit www.medievalmilemusuem.ie