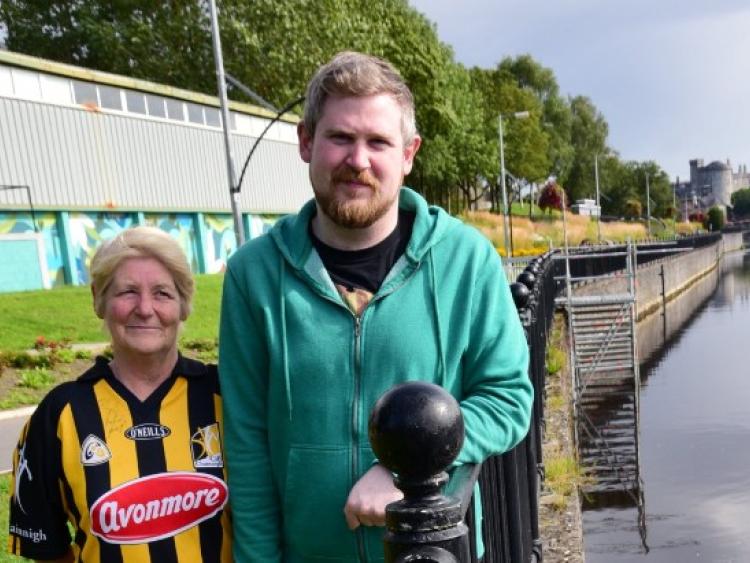 Adrian Brennan with his mother Geraldine at the spot on the River Nore in Kilkenny where the rescue took place PICTURE: HARRY REID

Nearly seven years after a heroic Kilkenny city man and his plucky mam saved a young girl from certain death, he has been nominated for a National Bravery Award.
The person he pulled from the raging River Nore, while risking his own life was close to death but survived and now leads a full life.
After a struggle in the extreme cold, they both went under the water but Adrian Brennan from Wolfe Tone Street in the city would not let go and caught a hold of one of the steps on the ladder on the river wall to preserve both their lives.
He lifted her out of the river and after her laying her on the grass, near the old swimming pool, realised he had to get her home to his own house or she would perish.
He ran the few hundred yards to his house on Wolfe Tone Street where his mother took off what was left of her clothes and put fleeced pyjamas on her while Adrian boiled two kettles for hot water bottles.
The ambulance soon arrived and rushed her to St Luke’s Hospital. She remained in Intensive Care for three days before recovering.

Adrian Brennan was sitting at home on November 25, 2012 when a neighbour shouted, there’s a girl in the river.
He leapt off the seat and ran down to the Peace Park with his mother Ger where he saw her bobbing in the water.
Adrian cannot swim yet went down the ladder on the side of the river wall and miraculously managed to catch her as she went by in the fast flowing current.
He struggled to lift her out as she was dead weight and he held on her as his mother held on to him.
Suddenly they were both under the water but Adrian kept a vice-like grip on her in the icy waters and managed to pull her back up the ladder, eventually putting her over his shoulder.
Ger and Adrian laid her on the grass and started resuscitation.
A couple were walking by and Ger asked then to ring for an ambulance but they refused.
Shocked by the response, Adrian picked up the girl and ran to his house where they started to work on the teenager who was purple.
“She was in and out of consciousness and we just did out best to keep her warm,” Geraldine Brennan said. The mystery now is who nominated Adrian for the award?