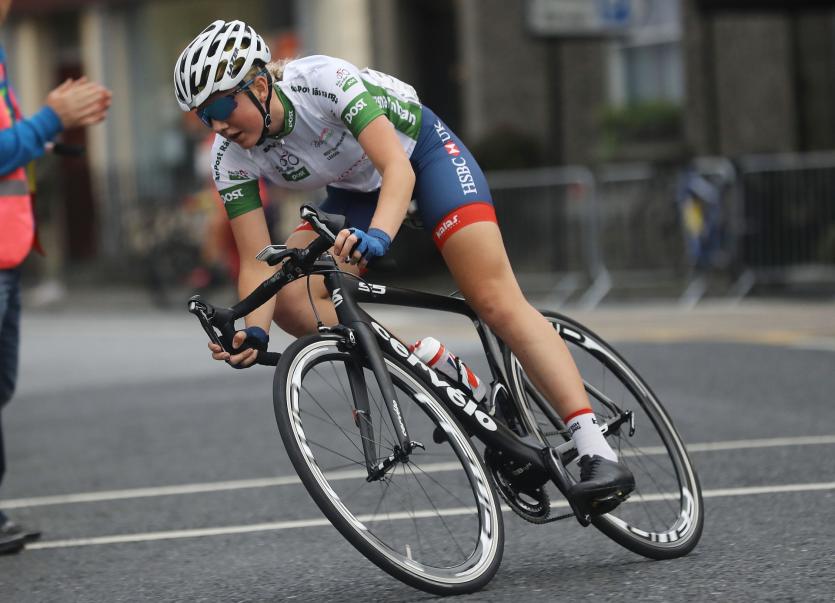 Mel Lowther of the Great Britain team on a lone break for several circuits around the centre of Kilkenny city during stage 5 of Ras na mBan last year Pic : Lorraine O'Sullivan

Strong national line-ups from Ireland, Great Britain, Slovakia and the Isle of Man join the trade and club teams entered for the 14th edition of Rás na mBan which starts in Kilkenny tomorrow.

With National Masters Champion, Katharine Smyth, National Road Series leader Grace Young, the reigning junior national road champion and Rás na mBan green jersey holder Maeve Gallagher and world junior track championship medallist Lara Gillespie making up the quintet, the Ireland team are sure to be in the thick of the action throughout the week.

For the Great Britain team, last year’s second stage winner in Castlecomer Rhona Callander returns to Ireland with fellow Scottish riders Jenny Holl and Anna Shackley, the latter the best British finisher in the recent Tour of Scotland.
Their line-up is completed by England’s Josie Knight, a former resident of Kerry who was formerly part of the Irish high performance set up. The Great Britain team is managed by Emma Trott who was the first British winner of Rás na mBan in 2009.

The Slovakian national team is making its first visit to Ireland and is made up of riders who have featured in their national championships in recent seasons. They, like Great Britain and Ireland, are using the event as a final tune up for the upcoming world championships in Yorkshire.

The Isle of Man have once again sent a team to Rás na mBan and they are typically amongst the most active in the event.

The rest of the 21 team entry is made up of teams from Ireland and elsewhere in Europe. Peppered among the stellar entry list are riders of proven calibre in this and other international events.

Ireland’s Lydia Boylan won a silver medal at the World Track Championships in March and has spent much of the year focused on her bid to qualify for the Tokyo Olympics. However, having twice finished runner-up in Rás na mBan and with the recent Tour of Scotland in her legs, the Dubliner will be one to watch in the colours of the Torelli-Assure-Madison squad when the race gets under way at Springhill Court Hotel, Kilkenny on Wednesday.

Natalie Grinczer is another rider with Rás na mBan pedigree having won the fourth stage time trial in Clare in 2015. The British rider rides week to week on the UCI tour with the Spanish Bizkaia Durango squad and this week is guesting with Brother UK Fusion RT as she looks to make the final selection for the Great Britain world championship team.

Elynor Backstedt is a multi-World and European junior medallist on road and track who has prior experience of Rás na mBan and is another homing form with the World Road Race Championships looming.
Of the home challenge, Maura Claffey of UCD is peaking nicely having taken victory in the hilly Laragh Classic last weekend.

The Ulster team includes Eileen Burns, a rider who will surely be eyeing the stage four time trial and whose experience will be a boon to her team mates. The Leinster team has regular Classic League top six runner Yvonne Doran and the Women’s Commission of Cycling Ireland selection is captained by experienced Cork racer Nessa Rochford.

Squads from the Netherlands, Norway and The Isle of Man make up the team list that also includes riders from Australia, New Zealand, Portugal, The Czech Republic and Poland.

The event begins with a 70km road stage from Kilkenny to Gowran and concludes on Sunday at Kilkenny following six stages in five days made up of four road races, a time trial and a city centre circuit race on Saturday afternoon for a total of over 400km of top class international bike racing.