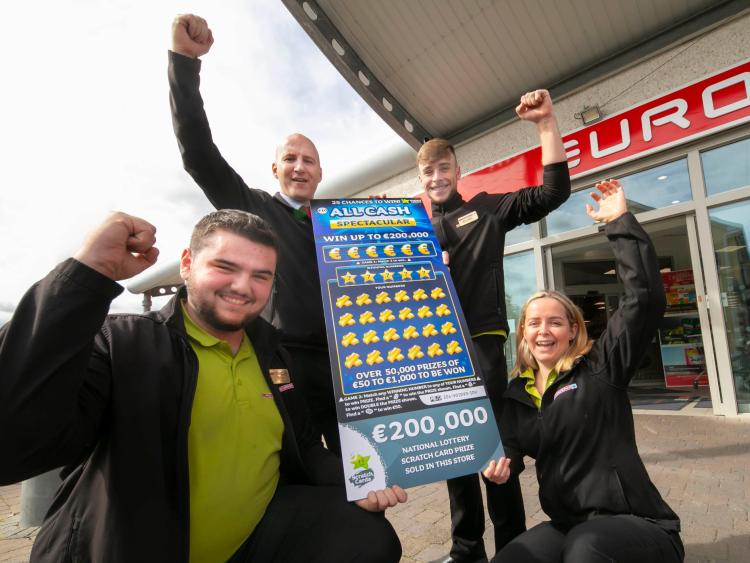 A lucky Kilkenny woman has described how she is still coming to terms with the shock of landing a €200,000 prize on a National Lottery scratch card while she waited in line for chips at her local take away in Kilkenny City last week.

The Kilkenny woman who wishes to keep her win private admitted that she is ‘absolutely dumbfounded’ with the win on an All Cash Spectacular scratch card and now plans to use the money to move her family out of rented accommodation and buy a house of their own.

Win! Dinner and tickets to Saint Sister at The Set Theatre this Friday.  Click here to find out how you can enter!

Speaking after she received her cheque for €200,000 in National Lottery offices in Dublin, the Kilkenny woman said:

“I’m still in a state of shock to be honest. I haven’t eaten or slept a wink since. I keep expecting somebody to tell me I’ve made a mistake and that I haven’t won anything. I popped into EuroSpar last Thursday to pick up a few groceries and of course the all-important scratch card. I went next door to the chipper to get the family something for their tea and while I was waiting for the food I started scratching away when all of a sudden, I’m looking at a €200,000 symbol on the scratch card. I nearly fainted there and then - my stomach has been somersaulting ever since!

The lucky €10 scratch card was sold at McCarthy’s EuroSpar in Newpark in Kilkenny City. The National Lottery have also confirmed that there are still three top prizes of €200,000 remaining on the popular All Cash Spectacular scratch card.

The delighted Kilkenny woman added: “It’ a fantastic prize and it will mean the world for my family. We have a few bills to pay off but the ultimate aim is to get a home that we can truly call our own. Now that I have the cheque in my hand, it feels more real so we’re going to have a look at some nice properties in the city and hopefully we’ll have a new home to move into in the next few weeks.”

Want to share that winning feeling? Play EuroMillions. Tuesday’s jackpot is an estimated €150 million. Play in store, on the National Lottery App or online by 7:30pm by Tuesday evening for your chance to win.

Nearly 30 cent in every €1 spent on all National Lottery games go back to Good Causes in the areas of sport, youth, health, community, arts, heritage and the Irish language. In total more than €5 Billion has been raised for Good Causes since the National Lottery was established 30 years ago.