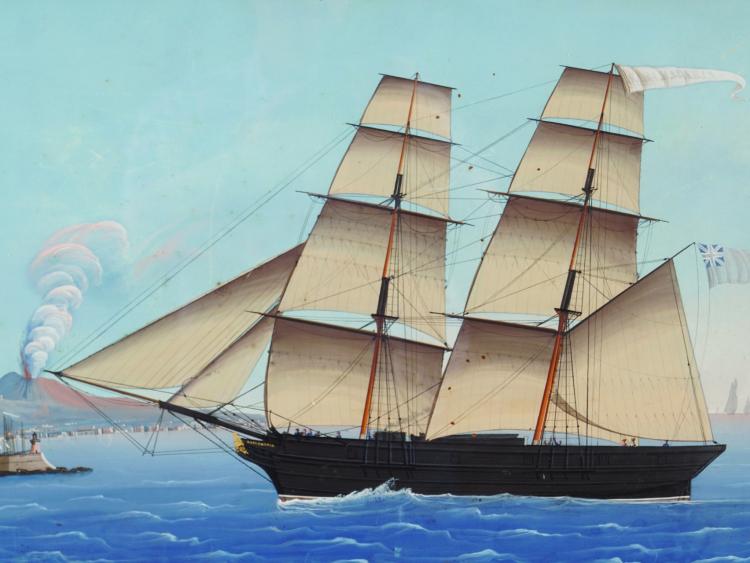 A painting of one of the few ocean going ships built in County Kilkenny goes under the hammer at Sheppard's Auction House, Durrow on September 24 and 25.

The brig Sarah Maria was built at White’s Shipyard, Ferrybank with two square-rigged masts. In the painting, it is depicted in the Bay of Naples with Mount Vesuvius clearly visible in the background.
Brigs were especially popular in the 18th and early 19th centuries. During the Age of Sail, brigs were seen as fast and manoeuvrable and were used as both naval warships and merchant vessels. The first ship to bring a cargo of tea directly to Ireland from China was built by White’s in it’s Ferrybank shipyard for Bewley’s.

The ship in this painting was named after the owner Samuel White’s daughter, Sarah Maria (1817-1905).  Between 1820 and 1868, White’s built over 60 vessels, largely of timber construction, in addition to repairing several hundred ships at its Ferrybank Yard. The Sarah Maria was 181 tons and was manned by a crew of 10.

Sarah Maria White married Robert John Lecky (1809-1897), who was an engineer on Valentia Island, he was a member of the Lecky family of Cork who were Iron-shipbuilders. Both he and Sarah Maria were members of noted Quaker families