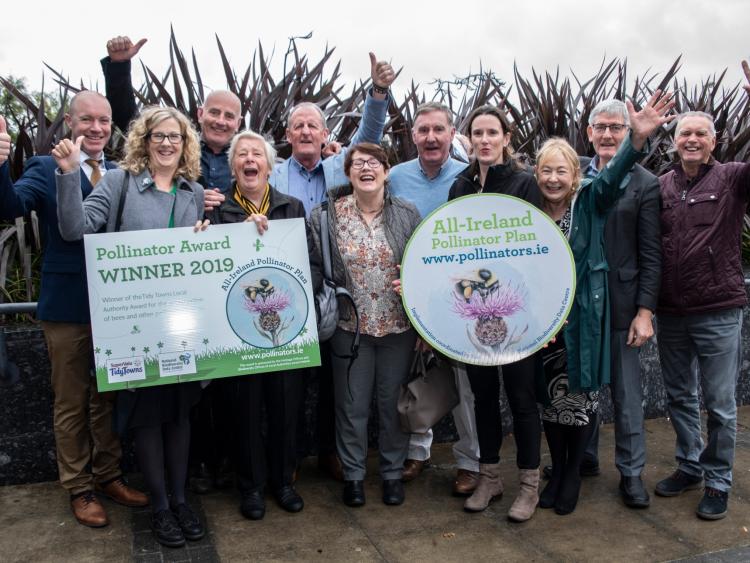 Celebrating at the Tidy Towns Awards on Monday

Kilkenny was the only county in Ireland to have two winners of a Pollinator Award in this year's National Tidy Towns Competition.

Kilkenny City and Tullahought both scooped the award, recognising all that has been done by the two Tidy Towns Groups to help pollinating insects. Kilkenny City won the regional award in the large town category, and Tullahought won the regional award in the small town category. Each Tidy Towns Committee received a prize of €1,000.

"As local authorities, we recognise this. We also recognise that the Tidy Towns competition has wholeheartedly embraced work to support pollinators, including our special Local Authority Pollinator Award. I’m personally delighted as Chief Executive of Kilkenny County Council, the first local authority to sign a framework agreement to support the All Ireland Pollinator Plan, that this award has been so successful."

Pollinator Award winners are recognised for protecting existing native hedgerows as well as planting new native hedgerows, planting pollinator-friendly orchards; reducing mowing to allow wildflowers to grow; and planting pollen-rich flowers. They have also done so much to help create awareness of our biodiversity and of the importance of pollinators by working with local schools, Beavers, Scouts, ICA, and through local businesses, and garden competitions.

One third of the 99 bee species are threatened with extinction from Ireland. This is because of the drastic reduction in the amount of food (wildflowers) and safe nesting sites in the landscape. The All Ireland Pollinator Plan was launched in 2015 as a shared plan of action to try to reverse these declines and work with communities, businesses, parks, schools and farms to make an Ireland where pollinators can survive and thrive.

The Local Authority Pollinator Award aims to encourage TidyTowns groups to implement pollinator-friendly actions in their towns and villages as part of the TidyTowns competition. It supports the All-Ireland Pollinator Plan and is coordinated and sponsored by the Heritage Offices and Biodiversity Offices of Local Authorities across Ireland, in partnership with the National Biodiversity Data Centre.

Since the award’s inception in 2016, there have been over 160 entries from towns and villages across the country, and according to feedback from TidyTowns judges, over 80% of the 860 general TidyTowns entrants are also following pollinator-friendly guidelines produced as part of the plan, even if they aren’t entering the Pollinator Award. Every year, the standard of entries is growing and the team behind the Pollinator Plan are amazed at what is being achieved.