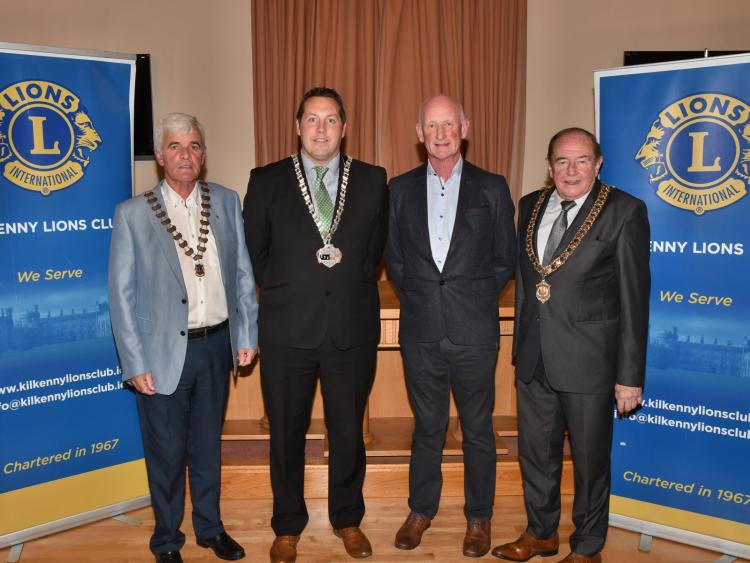 The Lions “Spirit of Christmas Hamper Appeal” was launched on Monday in City Hall by, Cathaoirleach Peter Cleere, Mayor Martin Brett, Lions President Rodger Curran and Special Guest and Freeman of Kilkenny Brian Cody.
The MC on the night was George Candler.

Cathaoirleach Peter Cleere thanked the Lions Club Members for the significant amount of money they have allocated over the years to organisations in County Kilkenny . He said that, without the Lions support, many organisations would find it difficult to fully fund their programmes. He thanked the Kilkenny People and KCLR who do such great work in promoting the appeal.
At the launch Mayor Martin Brett referred to the various fundraising activities by the Lions Club in the run up to the Christmas period, including the Hamper Appeal, Duck Race, Wine Fair, Schools Concert and the Street Collection.
He congratulated the Lions Club for the positive contribution they make in Kilkenny.

Lions President Rodger Curran said he was delighted to be in City Hall to launch the 2019 “Spirit of Christmas” Hamper Appeal. This is a fundraising campaign undertaken annually by Kilkenny Lions Club in partnership with KCLR and Kilkenny People.
The “Spirit of Christmas” builds on the success of the annual hamper appeal which has been run by Kilkenny Lions Club for the last 27 years. 100% of the money collected is distributed to the caring and support organisations to assist them in their work with the needy across Kilkenny City and County. Kilkenny Lions are pleased to have supported over 90 local community organizations from the proceeds of its fund raising activities..
The Club’s primary fund-raising is through the auction. People will be aware that the ‘Spirit of Christmas Appeal’ is divided into two sections, a “Farm Section” and a “General Section”. The Kilkenny People Newspaper publishes the “General” and “Farm Auction” lists of items with names of over 200 business-donors over a three week period prior to and during the auction. The items are then auctioned on “air” and it is hoped over €25,000 will be raised. The General and Farm Auctions take place this year with the Farm Auction commencing on the 28th November and the General Auction on the 3rd December.
They also expect to have a shop available during this period to display the Auction items and where people can collect the purchased items.
This event would not be the wonderful success that it has been over the years without the support and generosity of many hard working people in our community. Kilkenny Lions would like to thank the many people who contribute unselfishly each year - s –
KCLR and Kilkenny People for their partnership over the years - Brian Cody for his unfailing support each year; The 200 or so, local businesses, without whose generosity the auction could not happen; The people of Kilkenny who donate so generously and Fellow members of the Lions Club who give hugely of their time each year.
He concluded by listing the other fund-raising events in late 2019/early 2020 which include- Sponsored Duck Race on Sunday 27th October. You can sponsor a duck for £5 by going to our facebook page @kilkennylionsclub; Wine Fair on 7thth November in the Wine Centre, Kilkenny; School Concert in St Canices Cathedral on 12th December; Street Collection – December; Carol Singing--December and Golf Classic – April 2020
Brian Cody congratulated the Lions for all their great work over the years and he was delighted to have been asked again to launch the appeal with the Mayor, Cathaoirleach and the President of Kilkenny Lions Club.
He referred to the generosity of the people of Kilkenny who are never found wanting in helping the less well off in our community. He also thanked the business community who every year donate a significant amount of items for the auction.
He concluded by wishing Lions every success over the Christmas period in all their fundraising events.

Day in the Life of Frank Stafford, Senior Engineer