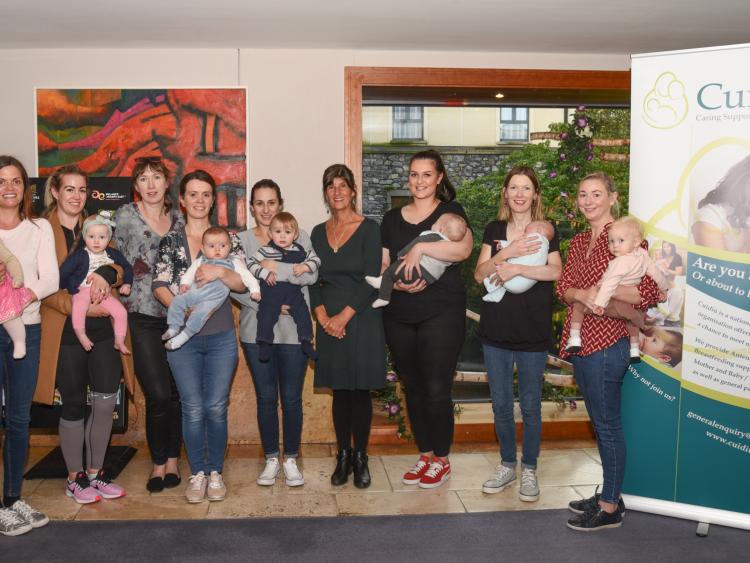 Kilkenny mums and their babies gathered in the Ormonde Hotel earlier this month to celebrate National Breastfeeding Week.
The women and children are members of Cuidiu, a group run by Lucy Glendinning in Kilkenny. On March 19 2009, Cuidiú opened its doors to the mothers of Kilkenny.
“On that day, ten years ago, I invited two women to join me for a coffee in the space I had found to rent. It was a room next to the Springhill Clinic on the Waterford Road. One of the women was pregnant, due soon and the other was a friend and neighbour with a six month old baby. They were my own personal “rent a crowd”,” said Lucy.
Amazingly, from that day on, Cuidiú Kilkenny has never hosted a morning where no one has turned up.
“I think on two occasions, we only had one mum and baby. I remember the first time sitting on my own, wondering should I pack up and go home but thank goodness I stayed; the mum was Australian and had travelled from well outside Kilkenny city.
“Within a couple of weeks of the group starting, the word was spreading. Here was a warm safe place to come and enjoy your baby, meet your new colleagues, swap stories, be reassured about how much of your new life was normal. You could ask questions about breastfeeding and find the support needed to get you over those sometimes difficult hurdles,” she added.
The numbers have grown steadily and within a couple of years the group was averaging ten mums and babies each week.
Once the first batch of babies became toddlers, the group realised that they needed to expand to meet their needs for toys, books and space. A second venue was found in the Scouts Den on the Castle Road and the Toddler Group was formed. It was a big space to fill but each week ten years later, mothers with toddlers and babies come to sing and play, have a cuppa and socialise. Many have returned again and again and again.
Since the early years, the Baby Group has moved twice and are now firmly established in Kilkenny Tennis Club. The room is warm and cozy and the fire is on in the winter. The place is bright and welcoming and the group have an average of 15 women plus their babies coming through the door each week.
In its 10 years of service, Cuidiú Kilkenny would have been in contact with close to 1000 mothers.
“The ripple effect of a happy mother walking out the door on a Wednesday morning, back to her family, her friends, her community cannot be underestimated. As a direct result of this organisation, we will have helped to improve the experience of many women and their babies, especially when it comes to those who struggled in the early days with breastfeeding.
“The best news of all is that we will be going from one to five qualified Breastfeeding Counsellors within the next 18 months!
“Four of those women who found the support when they needed it and who love breastfeeding and feel as passionately about it as I do, will be joining the community to serve even more women and babies in Kilkenny for the future,” added Lucy.
For more information contact www.cuidiu.ie