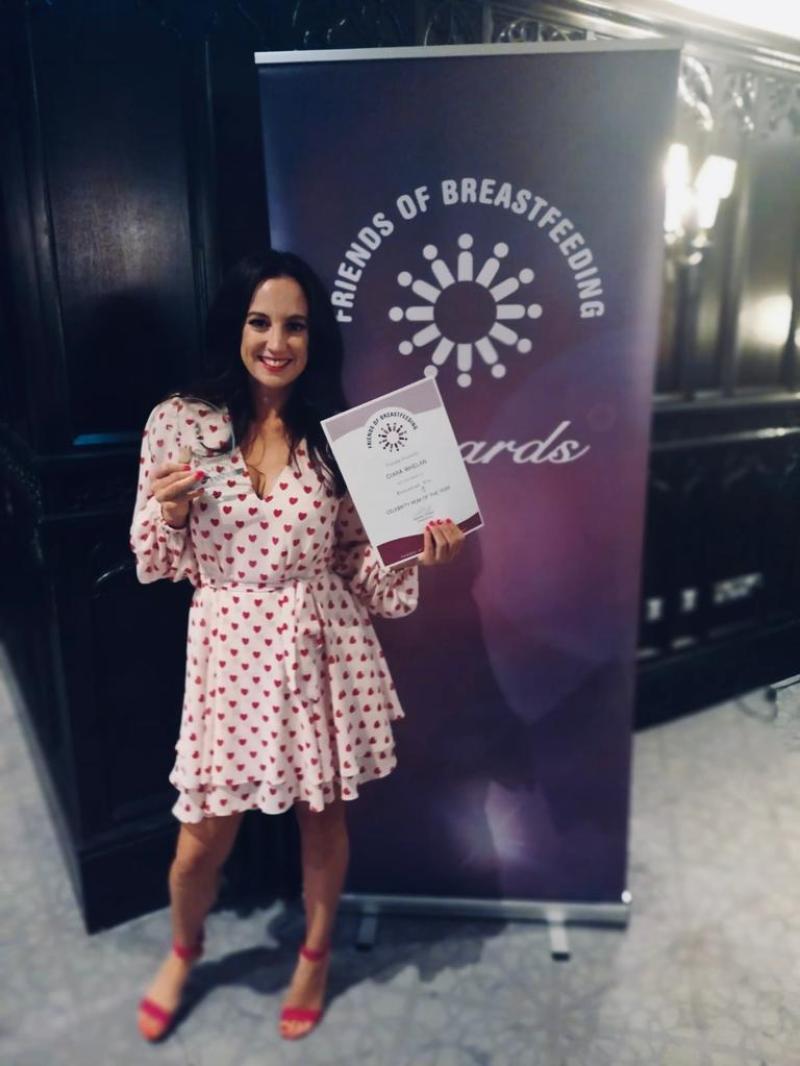 Kilkenny native Ciara Whelan won Celebrity Mum of the Year at The Friends of Breastfeeding Awards Gala this week. Sabina Higgins, Ireland's First Lady was on hand to help celebrate some of the country’s best breastfeeding advocates of 2019.

Ciara now lives in Kildare but grew up in Kilkenny. She is famous for co-presenting TV3’s The Holiday Show with Jon Slattery. Ciara and Jon’s new Road Trip Reality Show is currently on Shiny Day TV online and was featured on Ireland AM. The couple now have three girls who travel with them on their televised road trips.

After receiving the reward Ciara said “It’s actually a little bit bonkers that I got an award for breastfeeding, something I do all day every day without putting a whole lot of thought into. Unfortunately that’s the nature of living and raising kids in a country with some of the lowest rates of breastfeeding in the entire world. Before setting out to film our latest travel series we knew it was something we wanted to include. Besides, boobs are my very favourite travel accessory! It is so important that first time Irish Mums get the opportunity to see other mothers feeding and that we start to see breastfeeding for what it is - normal! Even though I have been feeding non-stop for nearly six years, all three of my starts were difficult and I don’t think I could stop advocating for other breastfeeding mothers here if I tried. I could not be more proud of this award. It means so much.”

Sabina Higgins named ‘Breastfeeding Advocate of the Year’ category and presented at the awards this year, addressing the gathering she said “ Breastfeeding is not just important for our society, it’s vital for our planet. With the climate crisis acknowledged we realise we are on the cusp, we must save the planet. One of the fundamental steps in doing that is to get the world breastfeeding. She passed on the title of Breastfeeding Advocate 2019 to nutritionist Aoife Hearne (Operation Transformation) for the incredible job she did on bringing the very powerful documentary ‘Tigers’ to the Irish cinema screen.

The Awards were extra special this year as Friends of Breastfeeding are also celebrating their 10th Anniversary. Aoife Hearne, who is a dietitian is a huge breastfeeding advocate and on the committee of Baby Feeding Law Group Ireland. She said at the awards “If we want to see a change (in breastfeeding rates), we need to be brave and willing to have the hard, honest, sometimes excruciating conversation with friends; work colleagues; healthcare care professionals and most importantly, mothers. I am hopeful that when my two beautiful daughters are mothers, that they will live in a society where breastfeeding is the norm”.

Friends of Breastfeeding celebrate their 10th birthday this year, to get more information on the awards and their buddy system you can find them Facebook.