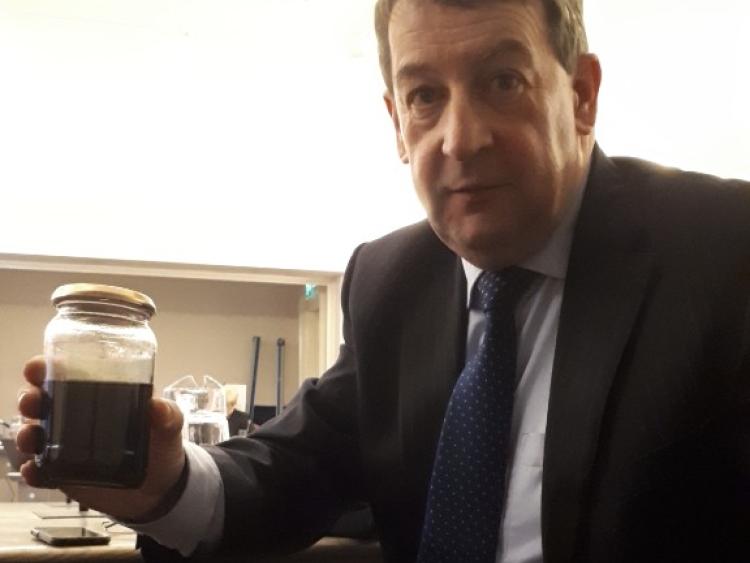 Local councillors have strongly criticised Irish Water for declining to attend council meetings and - they say - failing to answer questions for which they have sought answers.

North Kilkenny councillor Pat Fitzpatrick raised the matter on Monday as he voiced concerns over the condition of tap water in Moneenroe and Coon. Brandishing a jar of water in the council chamber, Cllr Fitzpatrick said it needed to be investigated.

“That’s the kind of water in Coon last week,” he said. “I ask that the CEO really get involved with Irish Water and get to the bottom of all this.”

Director of services Tim Butler said he believed the water may be from a private supply, but it would be investigated: “As to whether it is our responsibility or Irish Water’s, we will get to the bottom of it,” he said.

On the issue of accountability, Mr Butler said it was Irish Water’s policy that they did not attend council meetings, rather, they held quarterly clinics. He said the councillors should submit a list of questions, and Irish Water representatives would “come with answers on the day”.

Cllr Fitzpatrick said he was not happy with that: “They should be in this chamber to answer the democratically-elected representatives,” he said.

“It is totally unacceptable they fob us off with ‘drop us a line and we’ll come back to you if we think of it’.”

Cllr Andrew McGuinness said the matter had also been discussed at the council’s Corporate Policy Group.

“The majority of members expressed the view that Irish Water simply do not answer questions,” he said.

“They are hiding behind the executive, and no one in this chamber is happy at all.”

Mr Butler acknowledged the dissatisfaction expressed at the CPG: “I’m nearly ashamed to look at some councillors here because they have issues going back a very long time,” he said.