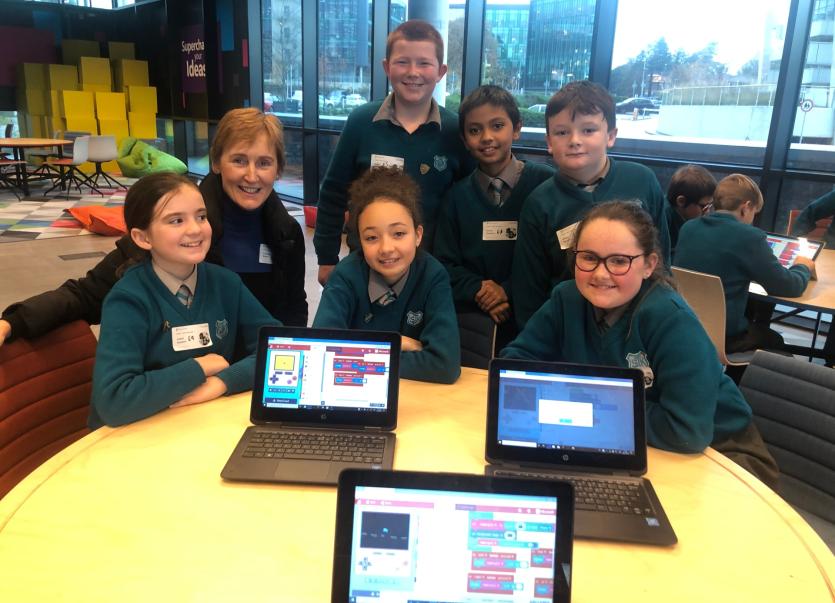 A large and tech-savvy team of coders from St John’s Senior School recently paid a return visit to Microsoft Dreamspace in Leopardstown, where they honed their growing tech expertise with coding and virtual reality workshops.

KidCoders is the name given by the pupils to the separate coding and robotics clubs established in late 2018 at St John’s Senior School to increase computer literacy within the school. The tech group is growing in both size and reputation.

KidCoders have doubled in size since their inaugural visit to Dreamspace; this year’s visitors comprised 17 experienced coders and 17 new members, fulfilling the school’s ambition to have junior and senior clubs, with seniors mentoring juniors.

On arrival, the group were treated to a tour of the enormous Microsoft campus and its first-class facilities — including a gym, and even beauticians and on-site yoga classes. After a visit to the LED pool – where thousands of lights are programmed to different looks for different times of the year – the real work began.

The young coders settled down to a MS coding arcade workshop where they created their own video game. In the second session, they participated in a virtual reality workshop, which combined photo, 3D imaging and video. The theme was Global Goals — being aware of the needs of the world around them — and the St John’s pupils were told to be as creative as they wanted.

“Visiting MsDreamSpace provides our students with an opportunity to take a glimpse into a future that our simple coding club is opening up for them,” said teacher Anna Marie Feeley, who established and runs the school’s coding and robotics clubs.

“The confidence they are developing in their coding skills was so evident. New concepts did not phase them, as they felt they already had the skills to take them on. Working in MS won’t be for everyone but perhaps, for some of our pupils, the seed was sown and the journey has commenced.

St John’s Senior School is pushing the envelope when it comes to STEM education.

Next up for the KidCoders robotics club is the Vex Robot Challenge, which takes place in late spring at Institute of Technology Carlow. This will be their second year to enter the competition for which they must build their own VexIQ robot — affectionately christened ‘Kevin’ — from scratch, and control it remotely to perform various tasks.

The club members have been busy working on ‘Kevin 2.0’ every day to have ‘him’ ready for the competition and have already had two visits to the Institute where lecturers from the Dept of Computing and Networking have been monitoring their progress.

“The trip to Microsoft, and collaborations with third-level institutes like IT Carlow and LIT, are hugely beneficial to our pupils,” said Brian Roche, Principal of St John’s Senior School.

“Through trips like these, they see coding as a really fun extracurricular activity. And by meeting and talking to professional coders, they can see the varied and exciting opportunities for themselves in the future.”