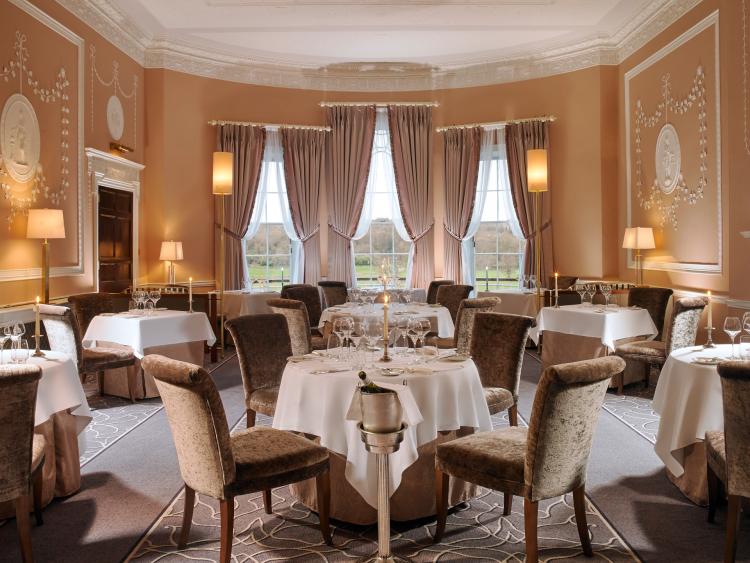 The Lady Helen restaurant at Mount Juliet has just been awarded a coveted Four AA rosettes, one of only two restaurants in Ireland and the UK to achieve such an accolade.
This award places the Thomastown, Kilkenny restaurant in the very top bracket as the AA have announced today the latest additions to their highly respected restaurant rankings

Head chef John Kelly and his team were commended  with the judges noting "Attention to detail is second to none and produce from the estate often features in chef John Kelly’s modern Irish cooking. Dinner might begin with a single, silky raviolo, stuffed with black truffle-studded potato and accompanied by a fine parmesan cream, followed by breast of Anjou squab pigeon, served on York cabbage, topped with hen of the woods and toasted hazelnuts, and finished with a rich, glossy veal jus, alongside a bowl of the braised leg and thigh meat. Caramelised banana ice cream is a deceptively simple dessert, served with tonka bean cremeux and brightly coloured, astringent calamansi gel."
The judges were also impressed with the setting  "The Mount Juliet is a fine example of the Georgian country house and estate, offering spa treatments and golf in addition to inspirational fine dining in the Lady Helen Restaurant. Named after previous owner Lady Helen McCalmont, it’s a coolly elegant, high-ceilinged room with intricate plasterwork and magnificent windows overlooking the grounds."

The rosettes are awarded for the quality of cooking and are similar in standard to Michelin stars. To be eligible to receive 4 AA Rosettes restaurants are required to achieve exacting standards in how ingredients are sourced, prepared and severed. This coveted achievement is awarded solely on the basis that the restaurant demonstrates exceptionally high standards of cuisine.

In awarding AA Rosettes, the AA Hospitality inspectors place significant emphasis not only on the final product, but also the produce used by the restaurant. In particular, the AA’s inspectors praised The Lady Helen Restaurant, as well as chefs John Kelly and Ken Harker for working closely with local and artisan suppliers to ensure that the menu always offers the best of what is in season. As part of a series of secret inspections prior to the award being given, the AA Hospitality Services team were impressed by the stewardship of chefs John Kelly and Ken Harker, crediting this leadership with the continued rise in standards from the innovative team at Lady Helen. In particular, the AA’s team credited the chefs for “taking their inspiration from the carefully sourced ingredients available to them, and adding well-honed technical skills, interesting combinations are created, yet nothing to frighten the less adventurous diner.”

Commenting on the awards, AA Director of Consumer Affairs Conor Faughnan stated “The team at The Lady Helen Restaurant truly do pull out all the stops to provide a memorable experience for anyone lucky enough to dine there. Our team of inspectors are far from easily impressed, and to achieve an award of 4 AA Rosettes requires not only incredible dedication by all those working in the kitchen, but a commitment to consistency in ensuring that every dish which leaves the kitchen meets the highest of standards.”

The AA has been awarding Rosettes for Culinary Excellence since 1956, with the top award of five rosettes being introduced in 1991. The multi rosettes are awarded bi-annually in January and September, with success being determined by a series of visits by a panel of hotel and restaurant inspectors.