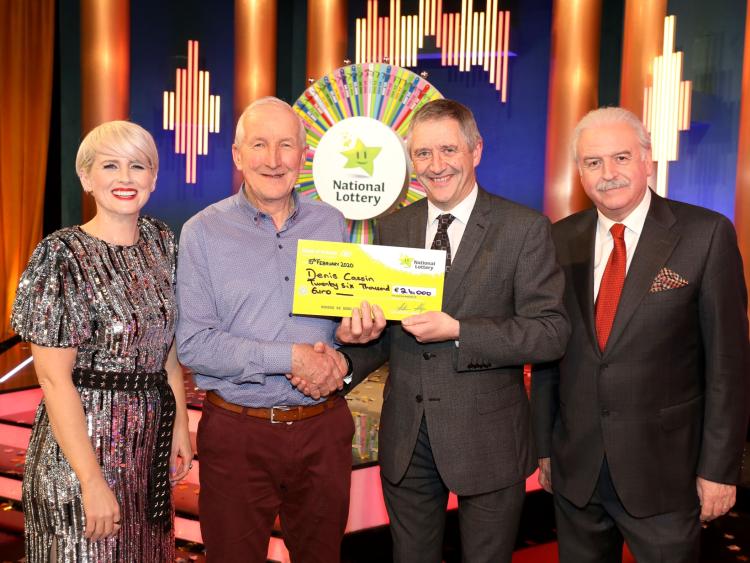 A Kilkenny farmer has won a tidy €26,000 when he appeared on the National Lottery TV game show, Winning Streak last Saturday  on RTÉ One.

Denis Cassin from Inistioge  was thrilled with his haul from the show and spoke about finding out that his name was drawn to appear on the show.

It was a couple of weeks back and on the same day he had just arrived home from his granddaughter’s christening when his phone rang with an excited relative informing him his name came out of the Winning Streak drum to appear on the next show. Denis could hardly believe it and he immediately switched on RTE One to confirm his good news.

Denis was buzzing about his Winning Streak appearance and relished the day out with his family. He has been married to his wife, Nora for the past 43 years and the couple have three adult children: Donncha, Kathleen and Mairead – all of whom cheered him on from the audience. In tow were their children, Denis’s beloved grandchildren. He has seven grandkids with five who were in the audience (Kate, Niamh, Denis Jr, Simon and Tommy), while the youngest two, Patrick and, recently christened, Cillian watched from home.

Denis was born and reared in the town of Inistioge in Kilkenny and works as a farmer on the family farm alongside his son Donncha. He is a mixed farmer and had sucklers and breeds sheep too.

Denis is hurling mad and is a big Kilkenny GAA fan having played a lot of hurling when he was younger. By all accounts he was a nifty centre half back for the local side, Rower-Inistioge GAA.

With his Winning Streak winnings he hasn’t made any firm plans but says that a sun holiday with Nora is on the cards and he will certainly treat his grandchildren.