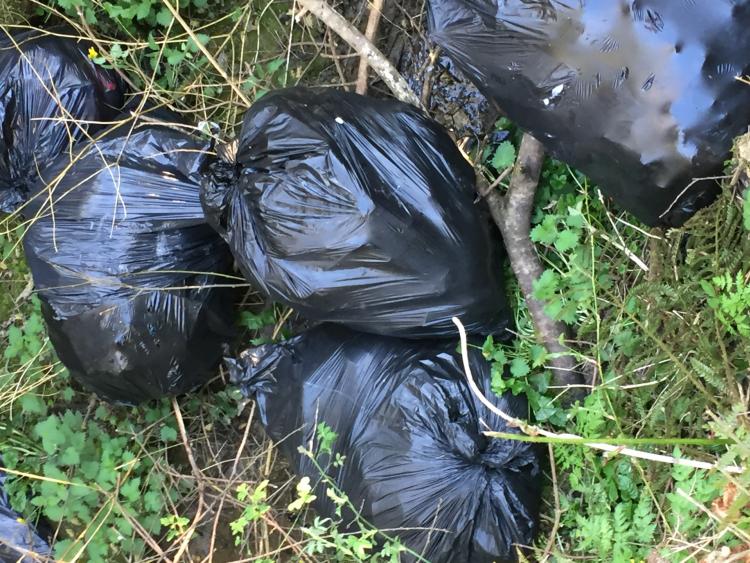 Bin bags found at an illegal dump site around 1km outside Johnswell village. It is currently under investigation by a council environmental officer

The incidents occurred over the last few days with objects including household items and the contents of house parties being dumped on the public roadside and on private property.

Cllr Fitzpatrick told the Kilkenny People that illegal dumping has been a ‘persistent problem in rural communities’ across North Kilkenny. Notwithstanding the huge efforts of local communities, people are continuing to carry on their illegal activities.

“We simply need more resources in terms of manpower and surveillance technology,” he said.

“It is clear to me that we are not adequately equipped to tackle the problem. Those who are carrying out the illegal dumping know that unless they leave material in the rubbish that will help to identify them, it is unlikely that they will be caught, that is a problem. The know they will get away with it, and this is not good enough.”

The Fianna Fail councillor said Kilkenny has seen a significant increase in illegal dumping again recently, and said council staff are under-resourced and under-staffed, with only a handful of staff tasked with monitoring the entire county of Kilkenny from Urlingford right down to Ferrybank.

“It simply is not manageable,” he said.

“Until proper resources are put in place this issue will continue, and I believe that as a council we must prioritise this issue and ensure that those who think it is ok to dump rubbish illegally are caught and punished harshly together with a ‘name and shame’ policy.

One of the illegal dump sites is about 1km outside Johnswell village. It is currently under investigation by a council environmental officer.

Cllr Fitzpatrick said it was ‘absolutely disgraceful’ that people would be illegally dumping at any time, but it was particularly galling when the country is in such a serious situation with most people showing a strong sense of community spirit.

“We are seeing a rise in this activity and it’s putting severe pressure on resources in following up the offenders as the council have staff working with the HSE from all departments,” he said.

WARNING
It follows a warning from the Chief Executive of Kilkenny County Council, who said the council was still active in the face of illegal dumping, and following up on enforcing.

“If people think we are not out checking it, we are,” she said.

Ms Byrne also said that while street litter generally had declined since the Covid-19 lockdown, the council was still noticing an increasing in dog fouling, and disposable gloves left on streets.

Last year, 16 sites in Kilkenny were investigated with a multi-agency task force, involving — as well as the council, the likes of Revenue, the Department of Social Protection and gardaí. There were nine prosecutions, and a further four cases are pending.

In total, 330 enforcement actions were taken across waste, water, air, and noise, with 24 fixed payment notices issued at €500 each, and 109 litter fines issued.