A day in the life of Hugh Wallace 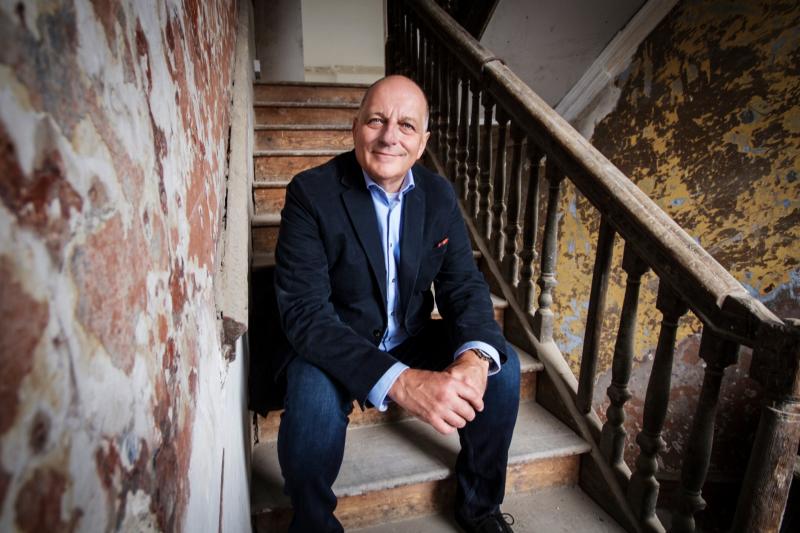 If you have followed RTEs popular TV show ‘Home of the Year’ for the past two months, then you were glued to your screens for this month’s finale as judges Hugh Wallace, Deirdre Whelan and Peter Crowley decided between the seven show stopper homes who would become this year’s winner.

The charming 19th century converted carriage-house in Dublin was crowned RTÉ's Home of the Year on Tuesday night and I had the pleasure of chatting to judge Hugh Wallace the next morning.

Hugh is a well-respected, award-winning  architect and founding partner of Douglas Wallace Consultants (40 years ago). He has a passion for creative design that engages with its audience to create conversation and comment. He believes that good architecture is essential to create social cohesion and enhance our enjoyment of our landscape and living environment whether in the city or country side. He believes it’s about creating a smile on our faces - creating a sense of place and belonging.

Hugh’s excitement at being involved as a judge in RTE’s Home of the Year is palpable as he opens the door to the most extraordinary homes in Ireland and seeing their creativity.  He is also the presenter of RTE’s The Great House Revival, his other passion, the restoration of our architectural heritage from the humble farm buildings to the great houses of Ireland.

Outside of the day job, Hugh loves to cook. In 2019, he appeared on Virgin Media’s The Restaurant and was awarded five stars.

Here is a glimpse into Hugh’s world…

Hugh, the renovation of the carriage house and hay loft was a labour of love for Ethna Dorman after the death of her husband William. What a deserving winner.

Yes it was. We are into our sixth series and if anything the houses just get better and better. We have 21 home and we whittled it down to just 7 exordinary finalists.

This year’s winner, the carriage house was a wonderful restoration but was also quite modern upstairs. So you had this contract of how you can restore a building. The dining room and the kitchen I thought were just pure genius, they were the old stables. The owner had retained elements of the stables and that was extraordinary to see. The house functioned with those big windows looking out to the court yard which had beautiful lavender beds. The exterior colours were really bold and it worked because those colours should have taking your eye out, but they didn’t because the building was pebble dashed and textured, and it was able to take the colour.

The owner’s late husband made a lot of the furniture and the writing desk, which was her favourite spot. I love the idea of writing and creating memories, because we no longer write to one another. It was a fascinating house because everything in that home had a story to it. That’s what made the house special. Too often houses have the sense that Pinterest has taking over, with elements on the walls that have no stories.

How important is the owner’s favourite spot to you as a judge?

The red spot tells you what they enjoy, be it spending time with their family, reading, a view or even just solitude. Quite a number of the red spot places are about family time or getting away.

What is the vavavoom factor that takes your breath away when you walk through someone’s front door?

Sometimes it’s not actually tangible. It’s the intangible, it’s the feeling you have in the house. You get a sense of the personality of the home owner and what it’s like to be in the house with these people.

I look for moments of creativity, design, and things that I haven’t seen before. Their ability to use colour and textures. The ability to mix and match checks with plains, linens with rough fabrics. It’s about things having a reason, the functionality and how the house is laid out.

What do people get wrong?

An awful lot of people seem to get islands in the middle of the kitchen wrong. The island is really where the kitchen table used to be, but all of a sudden you have these island units that are more elaborate and becoming architectural statements in the home. So the person who it cooking and working in the kitchen ends up adding to their journey time to get from the counter to the cooker and to the sink!

Tell us about your new show - MY BUNGALOW BLISS.

The bungalow is part of our architectural heritage and our social fabric. There’s lots of them around the country and they are 50 years old next year, these buildings are coming to their sell by date or period of functionality and they are fabulous buildings to restore and reinvigorate. We want to bring them up to today’s standards in terms of insulation, but also to transform the outside and make them fantastic, aesthetically pleasing and fabulous homes.

We hope to air it next year. We are currently looking for four bungalow owners, who will be matched up with four innovative architects. Together they will redesign their homes making them contemporary and more eco-friendly.

Will it be hard to make them eco-friendly?

No, however the bungalows will unfortunately need a lot of work done to them to bring them up to present standards of insulation, but that’s all achievable today. You can insulate the inside, change the windows and insulate the roof. You can take a bungalow that might have a F rating and bring them up to at least a C, but what you should be really trying to achieve is a B rating.

How did you get into television presenting?

Eight years ago I got a lifetime achievement award for my contribution to the design industry in Ireland and that was picked up by Shinawil Productions. I did an interview and apparently I was good enough to get the job! I really enjoy it and I love the fact I came late in life to it.

How are you finding the lockdown?

I’m at home with my partner Martin and we haven’t managed to kill each other yet! I have to say I am enjoying it, mainly because of the weather. If the corona virus had appeared in November we’d all be feeling very different.

I do hope the outcome of this, when we all look back on it, is that there is more social and wellbeing of each other. That’s so important to society.

Any tips for us in creating the right work/life balance in our homes?

I think it’s very important to go for a walk before and after your work, in order to get some structure and discipline in your day. Generally what’s happening to people, they do a few hours work, then the kids come in, stuff happens and they eventually go back to work. They are in and out of doing work all day and all of a sudden its 8pm!

If it’s at all possible have a room to yourself so you can lock the door. If you can’t do that, use the bedroom so that you can just get away and focus on the job in hand. Set up your desk, and place things that you like around you, so when you look up you can have a little smile!

If you are a recent first-time buyer in need of inspiration, empty-nesters looking to start your next chapter, or anyone else in between, and if you have a bungalow and a budget to renovate it. Contact bungalows@animotv.ie for information on how to apply for MY BUNGALOW BLISS.