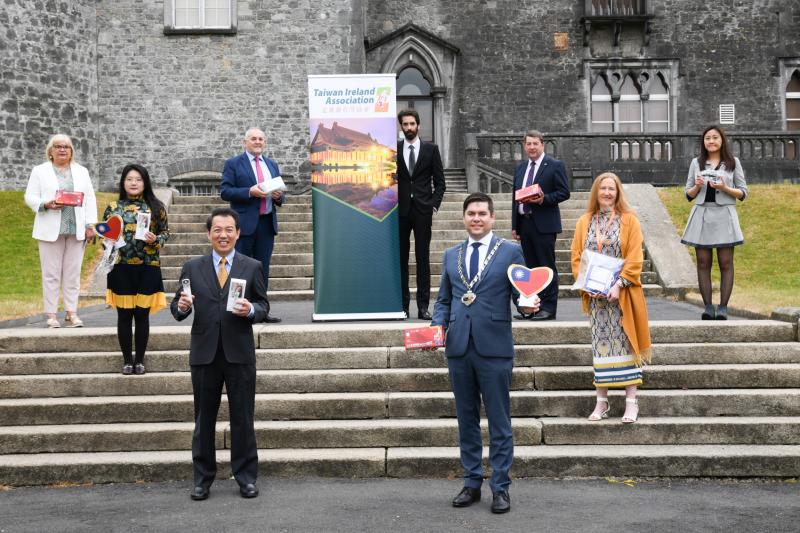 In one of his first official engagements as new council cathaoirleach, Cllr Andrew McGuinness accepted a large donation of Personal Protective Equipment (PPE) from Taiwan on Friday.

Among the materials donated were 2,000 medical masks, infrared forehead thermometers, gowns, goggles, and medical gloves. Cllr McGuinness says the equipment will be distributed to community hospital facilities in Kilkenny.

The donation was made through the Ireland Taiwan Parliamentary Friendship Association, which is chaired by local TD John McGuinness, and the Taipei Representative Office in Ireland, in partnership with the Taiwan Ireland Association.

Representative Yang noted that Ireland has entered the second stage of its roadmap anti-epidemic plans as of June 8. As members of Irish society, the donation of high-quality PPE to help Ireland to fight the epidemic is the intention of the Taiwanese community.

At the same time, Taiwan also hopes to establish long-term, mutually beneficial cooperation with Ireland as the impact of the epidemic alters many of the operating models we are accustomed to. For example, the global PPE manufacturing ecosystem has transformed from what is known as a "monopoly world factory" to "local manufacturing" and "regional short chain". Taiwan is very willing to cooperate with enterprises in Kilkenny City in order to produce masks with Taiwanese machinery and European materials, as well other epidemic PPE.

Deputy John McGuinness and Cathaoirleach Andrew McGuinness were greatly appreciative of the Taiwanese community’s donation of medical materials, echoing Yang’s remarks regarding the desire for further cooperation between Ireland and Taiwan to produce PPE locally. They also pointed out that Taiwan has performed excellently in the prevention and treatment of the coronavirus epidemic, a system that is worth learning from, and hopes that Ireland and Taiwan will continue to strengthen medical and health ties in the future.

Chairman Cheng added her own remarks, saying that in the face of the epidemic, the Irish and Taiwanese share a common goal. In this spirit, Ms Cheng launched a fund-raising event which received an enthusiastic response from the Taiwan community. In the future, she said that she will continue to do her best to contribute to the health and safety of Ireland as she continues to live and work here, ensuring that reliable medical supplies for all who need them.