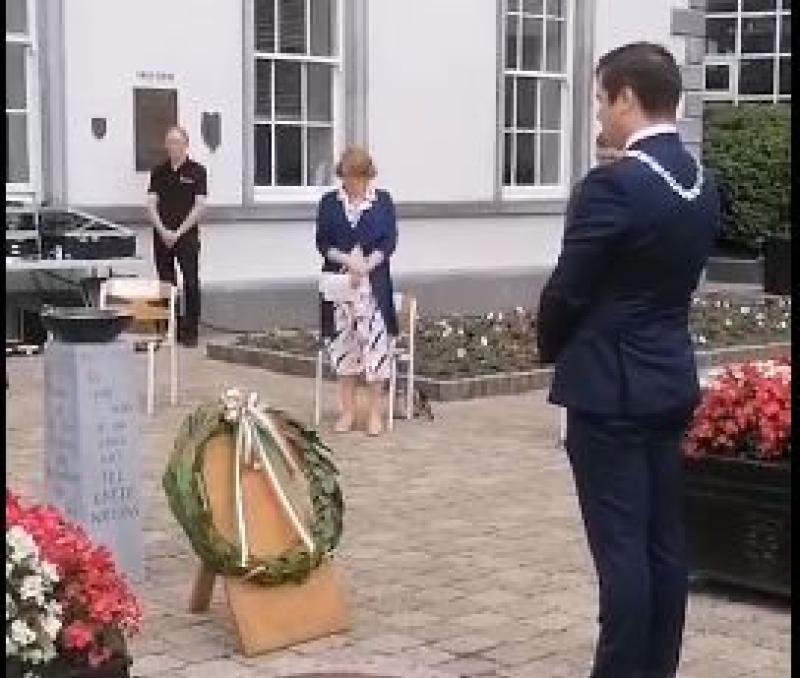 Irishmen and women who died in past wars or on service with the United Nations were remembered at a special ceremony in Kilkenny today.

The regional National Commemoration Day ceremony for counties Kilkenny, Carlow, Laois and Offay took place in the grounds of County Hall. It was one of a number of regional ceremonies taking place around the country.

Commencing officially at 11.15am, the event involved a number prayers from the officiating clergy, readings from local and visiting dignitaries, while a number of hymns were sung. Cathaoirleach of Kilkenny County Council Andrew McGuinness laid a wreath in honour of all those Irishmen and Irishwomen who died in past wars or on service with the United Nations. This was followed by a minute’s silence.

Adressing those in attendance, Cllr McGuinness thanked everyone who had participated in and helped organise the event to commemorate those who made the ultimate sacrifice.

“Today is a day set aside to commemorate — a time out to reflect, and to consider complex historical events and their legacy, and of the multiple ideals and traditions which are part of Irish history and for the ultimate sacrifice which people made to honour and achieve those ideals,” said the Cathaoirleach.

“Our aim today is to broaden sympathies, without having to abandon loyalties. As an island, we have a common history but not a common memory of events which shaped our development. Some of our most significant historical events have a strong resonance with one community or place but not with another.”

Cllr McGuinness said it was important to acknowledge and understand these differences and to respect divergent traditions.

“Commemoration should not ignore differences and division but should act as a constant reminder of the futility of bitterness and division," he said.

As the ceremony neared its conclusion, Lieutenant Eamon Hennessy hoisted the Tricolour to full mast with Charlie Parsons sounding the Last Post on the bugle. Proceedings came to a close with the singing of the national anthem.

In previous years, such ceremonies have taken place in the grounds of Kilkenny Castle, but with Covid-19 restrictions, this was a greatly scaled-back event which was not open to the public and was instead streamed live on Kilkenny County Council’s social media platforms. It saw key participants and a very small number of other guests including local and regional public representatives, members of the Defence Forces, An Garda Síochána and religious leaders.