Listen to his new single here! 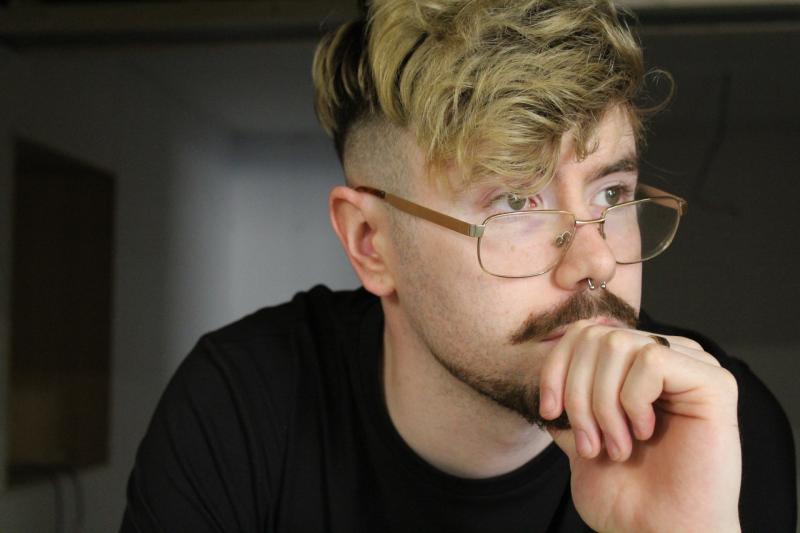 There’s a cliche in the music business about becoming an overnight success after years of hard work. For one singer songwriter from south Kilkenny that’s what is actually happening.

Graignamanagh musician Robert Grace has just signed a worldwide deal with music industry giants Sony and RCA after years of small steps in his music career.
“It’s crazy, it still hasn’t sunk in,” a delighted Robert told the Kilkenny People this week, as he prepared to make his first ‘proper’ music video.

On Wednesday Robert was at a venue in Co Offaly with a full film crew, hair, makeup and wardrobe, to shoot a video for his single ‘Fake Fine.’
It’s that song that grabbed the attention of music industry bosses at the top three companies in the world - Warner Music, Universal and, the company he eventually signed with, Sony, a label that also has Childish Gambino, Pink and Dojo Cat.
Sony Europe along with RCA in America ensure Robert’s music will be promoted worldwide. He’s signed a deal for at least one album.
It’s a huge career step up from recording and releasing music on his own, which Robert has been doing.

‘Fake Fine’ is already an online viral success - with lyrics that capture the mood of the Covid pandemic, but paired with a catchy tune that grabs the listener.
It’s resonating with people from different parts of the world and of all ages.

Since it’s release online ‘Fake Fine’ has had a quarter of a million streams on Spotify alone. Robert has 185,000 followers on TikTok, after he spent the last two months putting up videos of himself doing cover versions of songs in the run up to his release of Fake Fine. It’s also been aired on local radio.

Ten days after he released Fake Fine Robert had his first contact from a music label.
Things have happened quickly since, but before that it was a slow build up for Robert. From a musical family - his dad is in the band Drop the Penny and his brother took part in You’re A Star on RTE with his band Scuba Dice - Robert knew he wanted to be a musician from the age of 13. He had already started to learn the guitar, was starting to write (“pretty terrible”) songs, and at Duiske College, where he was a student, he was the go-to guy for any school events that needed musical accompaniment.

Robert studied music performance and technology in college, giving him valuable recording skills. Years working in a studio, working with acts like Louis Walsh’s Hometown, were great experience when Robert released his first EP in 2016. Before then he was mostly writing for other people but he has released one or two singles a year since.

“It’s such a hard industry, I’ve had some really big let downs, it can really knock you. It’s only in the past year I have let myself enjoy thinking about what might happen.”
Along the way Robert kept writing and entering songwriting competitions. He won the first two competitions he entered, and met his now manager who was a judge at one of the competitions.

At home in Graignamanagh Robert has a great extended family support team, with his wife Corrine and three year-old son Lincoln at the heart of that. Lincoln is already playing toy guitars and loves banging away on a piano. He’s his dad’s most serious critic. “If he doesn’t dance to a song I write I know it’s not good,” Robert said.

He started writing Fake Fine back in February. The word ‘pandemic’ came into our vocabularies soon after that, and it made its way into the chorus of Fake Fine, which Robert finished with help from his friend Ryan Mac.

To quote another cliché - every cloud has a silver lining. Robert is conscious that the Covid-19 pandemic had caused huge disruption to his industry, but the strange circumstances have played a part in his success.
“It takes one song,” he said. “That song could come at the start or after 10 years. Fake Fine was the right song. Without the coronavirus this wouldn’t have happened. A lot of artists are struggling. I was just very lucky and I am very grateful.
“I can’t wait to see what happens.”

Listen: You can listen to 'Fake Fine' on Youtube by clicking here!