Building has been painstakingly restored, and gallery now has space to house more works and expand 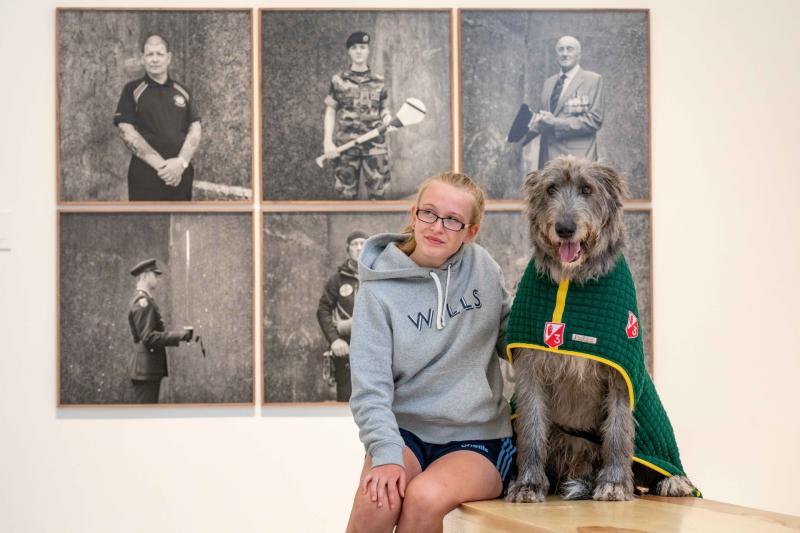 The newest jewel in Kilkenny's crown has been officially unveiled and opened to the public, with the launch of the Butler Gallery at Evans' Home today.

The project is the result of the €6.3 million redevelopment of an early 19th century alms house just off John Street. Proposals to transform the building were first mooted in 1994, and an initial grant was secured in 2007. The plans managed to survive the economic crash and have now come to fruition, having been funded by Failte Ireland, the Department of Culture, Heritage and the Gaeltacht, and Kilkenny County Council.

The new Butler Gallery was launched by Minister of State for Heritage and Electoral Reform Malcolm Noonan, in his first official event in Kilkenny since his appointment to his new office. The gallery is open free to the public from tomorrow with pre-booking. The inaugural exhibition in the main gallery, 'The Bloods' by photographer Amelia Stein, features a series of black and white portraits of members of the Defence Forces stationed at the James Stephens Barracks.

Cathaoirleach of Kilkenny County Council Andrew McGuinness gave a special welcome to artist Jane O' Malley, whose work and that of her late husband Tony O' Malley, features prominently in the new space. Cllr McGuinness said the Butler Gallery 'now sits comfortably in the footprints of the past'. He said what had been spent on the building had been well spent, but it was insignificant compared to what the Butler Gallery had given to Kilkenny over the years.

Minister of State Noonan paid special tribute to the late Tony O'Malley. He said that as a youth, he had aspired to be an artist because of Mr O' Malley.

He noted that the exhibition by Amelia Stein was an important testimony to the men and women of the Defence Forces and the local barracks, where he himself spent many years as a child when his father was stationed there. He said the gallery could be the fulcrum of the regeneration of 'one of the most significant and unattended areas of the city, John's Quay'.

"Finding a new purpose for the Carnegie Library - perhaps our archives - supporting the Home Rule Club, the interpretation of the ongoing conservation of St John's Priory complex, and improving permeability and public realm for cycling and walking should all be considered," he said.

Located close to John's Quay, Mr Noonan said it could become the fulcrum of the regeneration of one of the most significant and unattended areas of the city. Quoting Hubert Butler, he said he hoped that it was part of a reversal of a trend of life having 'edged away from the rivers', and it would extend a pedestrian and cycle spine along the river, opening up possibilities for the city.

The gallery's director, Anna O' Sullivan, said it had been a long journey for the gallery, beginning in 1943. She said there had always been a long-term goal of finding an appropriate space to grow and house collections and new exhibitions.

Ms O' Sullivan said the original €2 million grant awarded in 2007 had been the catalyst to securing further funding. She thanked Dearbhala Ledwidge and said that little had they known when applying for that grant in 2006 that "it would take 14 years to get us to this happy day".

She said she had worked with three different council chief executives over the years, and thanked in particular the incumbent, Colette Byrne, "for truly seeing the potential of this site". Ms O' Sullivan also took the time to remember two prominent members of Kilkenny's arts community who have passed on, Gypsy Rae and Jean Conroy. "They will not be forgotten," she said.

Ms O' Sullivan thanked McCullough Mulvin Architects and Mythen Construction for their work on the project. She said the gallery was delighted to showcase the work of Amelia Stein, and that her exhibition pays homage to the building's former use as a barracks. She added that the new space would facilitate the hanging of a growing collection, and facilitate the learning and public engagement programme.

"This building, Evans' Home, has provided us with the immense opportunity of dedicating several galleries to our collection and the work of Kilkenny's own Tony O'Malley and his wife Jane O'Malley," said Ms O' Sullivan.

"We are hugely grateful to the generosity of Jane O'Malley for the donation of the estate of her late husband to the Butler Gallery. She has been a constant champion of his legacy and we are committed to showcasing, caretaking and safeguarding this estate and our collection into the future."

Chief Executive of Kilkenny County Council Colette Byrne said it was a special day for Kilkenny and the Butler Gallery.

"Today, the Butler Gallery comes of age and gets the keys to its own front door, its own home," she said.

"In hurling terms, it is the equivalent of winning the All-Ireland - it doesn't get much better."

Ms Byrne said it was another example of restoring and reimagining Kilkenny's built heritage assets, also mentioning the Medieval Mile Museum, Parade Tower, and the former Bishop's Palace. She said it was important to find sustainable uses for old buildings, and "we have a duty to mind our heritage buildings for future generations of Kilkenny people".

Orla Carroll, director of product development at Failte Ireland said Failte Ireland was very proud to be part of the project, having co-funded it with Kilkenny County Council. She noted the original ambition of 45,000 visitors in the first year, and 76,000 per year thereafter would likely have to be revised due to Covid, but said the gallery would still serve as a flagship for Kilkenny, and boost the hospitality and retail businesses in the John Street area.

"In addition to the contemporary art, this building enables so much more of Kilkenny, its past and future, to be shared culturally with both visitors and citizens of Kilkenny and Ireland," she said.

Ms Carroll said there are many wonderful sites in the town and county and it was important they were marketed and cross-promoted. This, she said, would develop the offering and increase dwell time, bringing back to the local economy.

"It is a wonderful addition to Kilkenny's offering," she said.