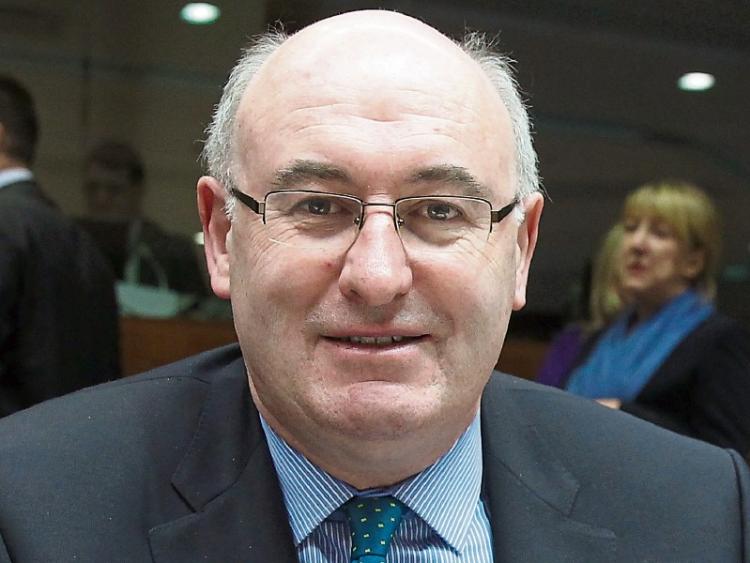 Phil Hogan is a somewhat of an omnipresence in Kilkenny having spent almost 40 years in public service.
Following his resignation the former EU Trade Commissioner wanted to thank the local community for their support and reiterated that ‘he broke no law’ and was subjected to ‘a full scale attack’ by the government.
“I wanted to take the opportunity to thank the people of Kilkenny for supporting me massively over the past few weeks during difficult times,” he said in an interview with the Kilkenny People, the only one he’s given following his resignation.
Mr Hogan acknowledged that ‘mistakes were made’ during his visit to Ireland in July and August when he attended the infamous Oireachtas Golf Society Dinner in Clifden and travelled to Kildare, a county in lockdown at the time on a number of occasions.
The former Commissioner said that his apology for the mistakes he made during his visit is sincere but added that the Covid regulations are not compatible with the work of MEPs.
Not compatible
“The regulations that presently exist are not compatible with the work that MEPs do,” he said.
Since Mr Hogan’s resignation a Fianna Fáil, Fine Gael and Green Party MEPs are asking that the 14-day quarantine requirement be lifted for MEPs who receive a negative coronavirus test before leaving Brussels.
The former Commissioner told the Kilkenny People that he has no intention to returning to political life either nationally or internationally.
“My life in public service after 38 years has come to an end. I am going to take some time out and reflect on what to do next,” he said.
“The government had a full scale attack on my compliance or otherwise,” he said adding that he ‘had no option but to resign because of the huge pressure from the Taoiseach, the Tanáiste and the media’. Mr Hogan also remarked that he did not receive ‘due process’ and said that he is ‘very disappointed’ with the way he has been treated.
“I didn’t get due process, unlike others. I am very disappointed that there was a huge effort concentrated on my resignation.
“I always feel like Irish people expect due process in the right forum. I didn’t get that. I wasn’t given that chance.”
Reflecting on his recent resignation Mr Hogan admitted that ‘it is not the way you want it to end’ referring to his 38 years of public service but he added that he is ‘very happy with the support’ that he has received from people.
“I broke no law. There was a lot of confusion around the advice. I tried my best. I made mistakes in terms of the interpretation of the regulations,” he said.
The Tullaroan man will be basing himself in Brussels for the foreseeable future and is ‘leaving it to others to comment on Brexit’ and its impact on Ireland.
“I worked closely to reduce the impact of Brexit on business and employment. It will be a challenge in the future and it will require a lot of vigilance from the Irish government.”