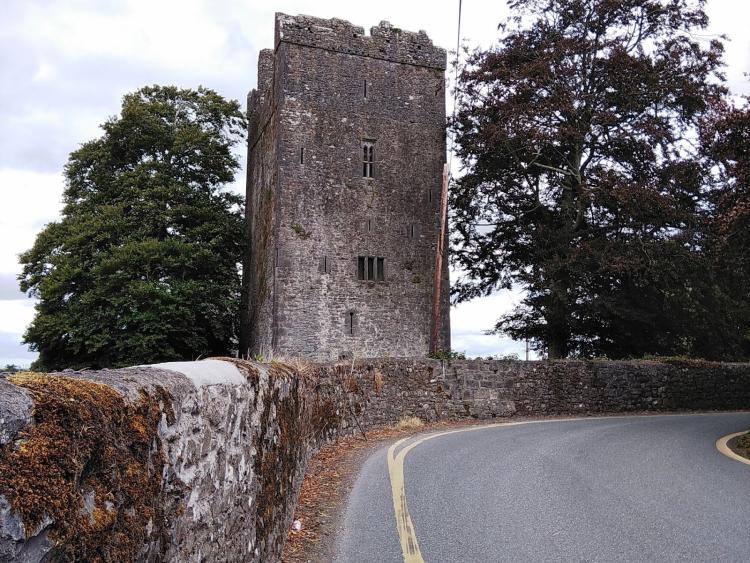 A bad bend at Burnchurch Castle

Shockingly dangerous levels of traffic on a winding, local road, with bad bends and no road markings, have prompted the people living in a rural area of Kilkenny to launch a safety campaign.
Patience with the council ran out when a HGV came within inches of hitting a little girl walking to school at Burnchurch.

The near-miss has left locals “reeling” and prompted them to step up their campaign.
“We are great in this country for hand wringing and tears when a tragedy happens but we’re not good about doing something to prevent it,” said local woman Dee Murphy. “I don’t want to wait until a child is killed on the way to school.”

Burnchurch is a beautiful, historic area, but on a narrow road with two very bad bends close together, at the historic church site, a narrow bridge, and 90 houses along it’s length, it is totally unsuitable that it is being used as a link road from the main Clonmel to Kilkenny road across to the M9 motorway, locals say.
One local said “the road runs through the community like a sliver of poison. We are choked and imprisoned by it.”

Following the near-tragedy, last week, Dee set up the Facebook page Burnchurch Safety Collective, and many locals have been telling their own stories, and supporting the campaign.
“My friend’s daughter was an inch or two from a HGV. It’s very scary. The HGV driver was completely oblivious,” Dee said.

The mother of that little girl told The Kilkenny People that calls for safety measures on the road are not new.
“Residents have been trying to get something done about the shockingly dangerous levels of traffic on the road, for years,” she said.
“I want to be very clear, this is not an attack on HGV drivers who need to be on the road. Feed is delivered to farms and milk is collected. Houses are built, home heating oil is ordered. Commerce is conducted in the area. These drivers are also affected, hampered and harried by the ceaseless traffic of all kinds when trying to go about their business.

“The traffic begins at 5.30am, and is endless, noisy and aggressive. The majority of the drivers, car, van and truck, have no interest in the historic Burnchurch Castle and its beautiful Lime trees. No one notices the old stone bridge, or cares that there might be children living in one of the many houses they roar past, that need safe passage to school. They are on that road to get to where they need to go, they’re stressed, late, and you better not get in their way.”

The mother went on to say: “All the traffic from Clonmel, Carrick, Killenaule, Ballingarry, Callan and further is funnelled through our little community, on that windy narrow road. We are like the narrow glass centre of a huge egg timer, squeezed beyond capacity and right on the edge of a catastrophic break.”

Dee said: “We have been talking and talking and talking about this for years, we reported it to gardaí, we met with local councillors and council road engineers, we sent emails, made phone calls. Everybody living here has a story about a close call. It’s crazy.” She recently saw a HGV with steel girders sticking out, negotiating the church bend and digging into the wall. It’s one of many incidents on the road that runs from Ballymack to Danesfort, the L1016.

Residents say there were five serious crashes at Sevenhouses cross in as many months last year and two crashes in the last few months, at Burnchurch and Danesfort.
Before Christmas there was a multi car pile up on the bend just past the castle in Burnchurch.
A speeding motorist lost control of his car on the same corner in June, the back end of his car was seen to swing violently towards the wall and back across the other side of the road. Luckily he regained control and sped off, only minutes after two local children cycled around the corner.
An elderly local man was almost knocked down trying to cross the road outside his own front gate. He was left badly shaken by the incident.

“We are not targeting individual drivers or people trying to do their job, we are targeting the council - this needs to be addressed,” Dee said. One morning last week Dee counted 16 HGVs pass the castle in one three-hour period, while children were going to school. Many won’t walk or cycle to school anymore. This summer’s lockdown showed locals just how nice the road could be, Dee added.
The mother who saw her little girl come within inches of the HGV said the situation “has been allowed to fester by willful and reckless neglect and negligence.” She said gardaí have been supportive and recommend bylaws be passed to reduce the speed on the road. Speed vans were promised but never materialized, she said.

“Dealing with this has been like trying to grab a slippery eel with its tail in its mouth, while banging your head off a brick wall and screaming into a black hole... we seem to go round and round in circles. Endless phone conversations, emails, meetings, but nothing that would bring lasting and meaningful change for the people that live on the road has ever happened.
“And in the mean time children still cannot walk or cycle to school, elderly people cannot visit their neighbours for a chat, no one walks or cycles for pleasure or fitness.”

Locals say these problems were highlighted before the motorway was built. A campaign by locals resulted in speed bumps at the school in Danesfort, at the eastern end of the road. Now they want something like that in Burchchurch, a speed reduction and the removal of the constant HGVs.
Chairman of the Callan Thomastown Municipal District, Cllr Peter Chap Cleere, accepted that particular stretch of road has been a concern for quite some time. As a parent, he said he totally understood that the situation “put the fear of god” in people. “We as a local authority have responsibility to make sure the road is safe for everyone. We have a responsibility that children are in a safe environment going to school.”

Speed bumps can’t be put on the road because of the current 80kph speed limit, he said, but the Burnchurch road will be included in an upcoming speed limit review and will be looked at in the context of an overall Kilkenny traffic management plan.
Cllr Cleere said the road needs a combination of speed management and traffic calming. He also stressed the personal responsibility of drivers and the importance of enforcing the speed limit, especially if it is reduced.