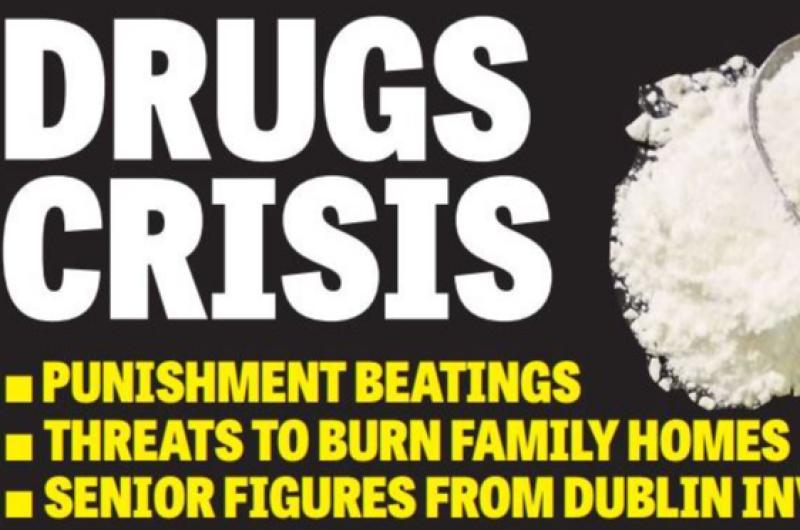 Senior figures from Dublin-based criminal gangs are involved in the drugs trade in Kilkenny, meting out punishment beatings and making serious threats to family members of local people who are unable to pay debts.

Garda Superintendent Derek Hughes told Monday’s meeting of Kilkenny’s Joint Policing Committee (JPC) that gardaí were aware of instances of abductions and beatings, and threats to burn out family homes as a result of drugs debts in the tens of thousands of euro. The issue was discussed as the JPC prepares to establish a multi-stakeholder drugs action sub-committee for Kilkenny.

Superintendent Hughes said that garda statistics show virtually every type of crime had been reduced in the Kilkenny and Thomastown divisions in recent years with the exception of one – drugs. He said over the past five years, gardaí had visited every community around the county and “without exception, drugs is mentioned at every meeting”.

Supt Hughes said there was a well-resourced drugs unit here, but the challenge remained significant. Seizures for simple possession have increased in the order of 50% over the last three years, while for sale and supply the figure is around 40%.
The superintendent also said there were young professionals in Kilkenny who had no prior involvement with gardaí but who had then been found in possession of serious quantities of drugs.

He warned of the existence of traps set for young people in which they are given a free amount of an addictive drug which quickly leads to a substantial debt accrued, and the individual’s family then being threatened. The young person is then coerced into transporting a large cargo of drugs to offset the debt, and when caught by gardaí, suddenly their entire future is in jeopardy.

“We have also seen young people abducted and beaten in relation to drug debts – that is, debts they owe for drugs,” he said.
“We are aware of demands for tens of thousands of euros and threats to burn houses.”

In addition to an arson attack, he described another incident in which a car had been driven at someone with a drugs debt in an attempt to run them over.

“We are seeing the involvement of senior drugs figures from Dublin in relation to drugs in Kilkenny,” he confirmed.

Supt Hughes said that while not commonly reported by media, there had been eight drug fatalities in Kilkenny between 2019 and now: “Eight — that is a very high number, and it is eight families destroyed,” he said.

Supt Hughes said gardaí are actively gathering intelligence and working on counteracting the availability of drugs, but there is a huge education programme needed. He said he wholeheartedly supported the establishment of the sub-committee to combat “what is the biggest threat to the safety of young people in Kilkenny at this time”.

JPC chairman Pat Fitzpatrick said a partnership was being put together “to fight this particular scourge”. He said it was a JPC-led initiative between gardaí and the JPC and was about talking to all the different stakeholders.

“Everyone has to get involved now,” said Cllr Fitzpatrick. “What’s needed is a partnership approach to coordinate and oversee actions to eliminate the scourge of drug misuse in our society and to keep our young people safe.”

Deputy John McGuinness said he welcomed the fact that the superintendent and gardaí were putting this information on record. He said that for a long time, some public representatives had been afraid to raise it because they were unsure if the reports were true, and if so, that the volumes involved were correct.

“You have now alerted the public in a very clear and concise way – and I commend you for it – to the extent of the drugs issue in this city and county,” he said.

“I would suggest that the hardest drugs you can find on the market are on sale here. I am delighted this committee is now coming to fruition.”

Deputy McGuinness said that ‘drug dealers and those up the food chain are ever-present’ in Kilkenny and are threatening families.

“Parents are in fear of their lives because of the threats they face,” he said. “Some have gone into serious debts,” he said.

He added that the members owed it to the young people and those under threat to tackle the issues and row in behind and support them.

Minister of state Malcolm Noonan supported Deputy McGuinness’ comments. He said to hear it had been somewhat shocking, but it was something many had been aware of.

“It is really important too the serious effects it has on family’s lives right throughout the entire county, not just the city,” he said.

Deputy Noonan said that historically, a lot of challenges were as a result of cutbacks to programmes and initiatives at a community level which had been stemming drug use and diverting people away from it. He also said there was a huge issue of alcohol misuse that needed to be dealt with, and spoke in favour of minimum pricing.

Cllr Andrew McGuinness said in certain local estates, residents were awaking in the morning to find evidence of drug use in their gardens. He described one incident that morning where a resident on the east of the city awoke to find drug paraphernalia including syringes in their garden.

Cllr Deirdre Cullen said schools needed a huge helping hand when it comes to the issue of drugs, and while traditionally it was older students such as TY who received education, that could now be first year students. She mentioned early school leavers and those who had experienced school refusal as at-risk. Cllr Cullen said that often schools were the only place where young people could be reached, but only if they are attending. If they weren’t supported, she said, that chance was lost.