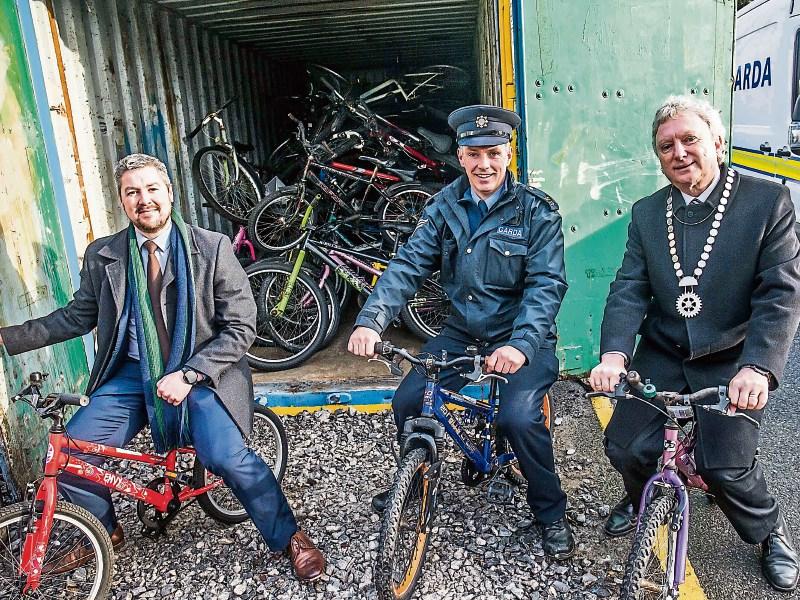 A small project to send unwanted bicycles from Kilkenny to school children in Africa is such a success that it has now been launched across Ireland.

The Kilkenny Rotary Bikes to Africa Project began five years ago. Last week leaders in Kilkenny Rotary and Rotary Ireland gathered at Dunmore Recycling Centre to mark a major expansion of the project - it now has government backing and bikes can be donated at 11 civic amenity centres across Ireland.

For the past five years Rotary Ireland have been collecting unwanted bikes from households around Ireland and sending them to Loughan House Open Prison for repair before shipping them to school children in Gambia to help them get to education. The bikes help them travel the long distances to schools.

This has worked well but has proved too costly for Rotary, being non-commercial, to continue without a partner and a sustainable funding model.

Following a meeting in January with the Department of Communications Climate Action & Environment, funding of €107,000 has recently been approved for 11 local authorities under the Anti-Dumping Initiative.

This support meant the project grow and expand, and will ultimately mean that circa 4,000 refurbished bikes will be collected from the Irish public over the next 12 months. These bikes will be sent for repair to now two prison bike workshops, Loughan House in Cavan and Shelton Abbey in Wicklow, before finding their way to school children in Gambia.

Jason Dempsey, Rotary Ireland District International Services Team Lead, and former President of Rotary Kilkenny who championed the project, said: “It is such a rewarding and worthwhile initiative which has seen circa 3,000 school children in Gambia supported over the past five years. Now with the generous support of the Department of Climate Action, Communications & Environment, we hope to support thousands more into the future.

“All of us in Rotary Ireland are really grateful that we have established such a willing partner in the DCCAE and by extension the national Waste Enforcement Regional Lead Authorities (WERLA) offices and the 11 local authorities.
“We often describe this project as being a WIN WIN WIN,” Jason said. “Win for Climate – repair and re-use and promoting sustainable transport. Win for Inmates – providing training and rehabilitation. Win for Children – providing a better chance for education.”

Jason went on to say that this project is “a true example of community collaboration in action” between Rotary, Government departments, WERLAs, local authorities, The Prison Service and The Defence Forces, who help with transport from the collection depots to the repair workshops.
“It’s important to keep in mind the huge impact that having a bike can have on these children in Gambia – its means a better chance to achieving a better education and the opportunities from this are obvious. A bike to us in Ireland is often considered fun and recreational, a bike in Gambia is a route to a better education.”

There will now be 11 Drop Off points across the country for bikes. Kilkenny, Meath and Kildare are existing site locations and have been involved successfully with this project for the past two years. Carlow, Clare, Cork, Kerry, Sligo, Galway, Leitrim and Wicklow are now being added to that network.