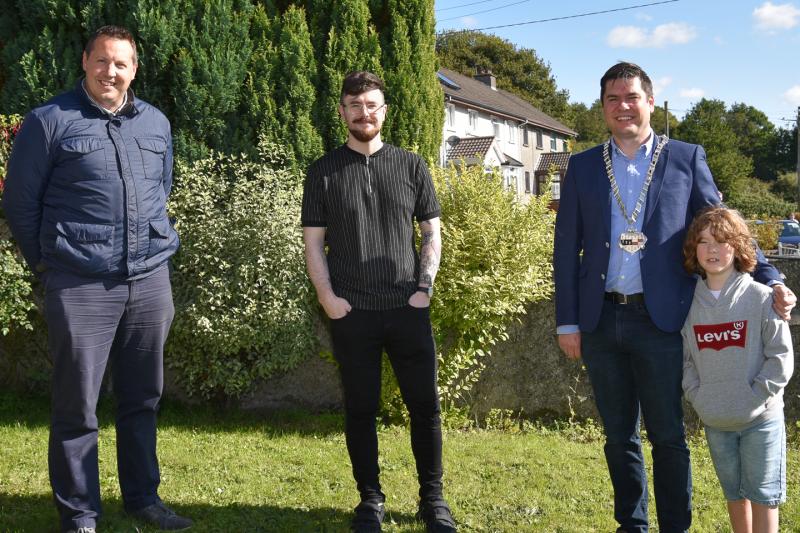 Kilkenny music star Robert Grace went to number one on the iTunes Ireland charts over the weekend after a special performance of his hit single ‘Fake Fine’ on Friday’s Late Late Show.

The Graignamanagh man has been causing quite a stir in the music world since he signed a worldwide deal with music industry giants Sony and RCA this summer. The single, ‘Fake Fine’ has been hailed as an instant classic and has over 2 million Spotify streams and hundreds of thousands of views since it was released on all platforms.

The Kilkenny singer-songwriter has been lauded by Cathaoirleach of Kilkenny County Council and fellow musician Andrew McGuinness, who recently visited him along with Cllr Peter ‘Chap’ Cleere, to congratulate and wish him well.

“It’s fantastic to see a young Kilkenny musician like Rob Grace doing so well on a national level. His achievements so far are extraordinary and the exciting thing about it is he is only just starting his career. I believe the best is yet to come,” said Cllr McGuinness.

“As chairman of the council I formally acknowledged his recent achievements of reaching millions of people through social media and Spotify streams of his song Fake Fine. That is a massive achievement and it is well deserved. I believe its important to acknowledge achievements like this in our city and county and to give encouragement and support, whether its music, art, sport, commerce and so on.

“When we visited Rob at his home on Saturday he was very humble despite the fact that on Friday night he was a big hit on the Late Late Show and his song went to number one on iTunes.”

Cllr McGuinness said Kilkenny was famous for its hurling, but also well known for incredible musicians.

“Rob’s achievements so far are fantastic for him and his family, who are well known as brilliant musicians, but its also great for Kilkenny and something we should all be proud of,” he said.

“I want to wish Rob the very best into the future and I look forward to watching his career progress. He deserves great things with his music and I’m sure we will be hearing a lot more from him.”