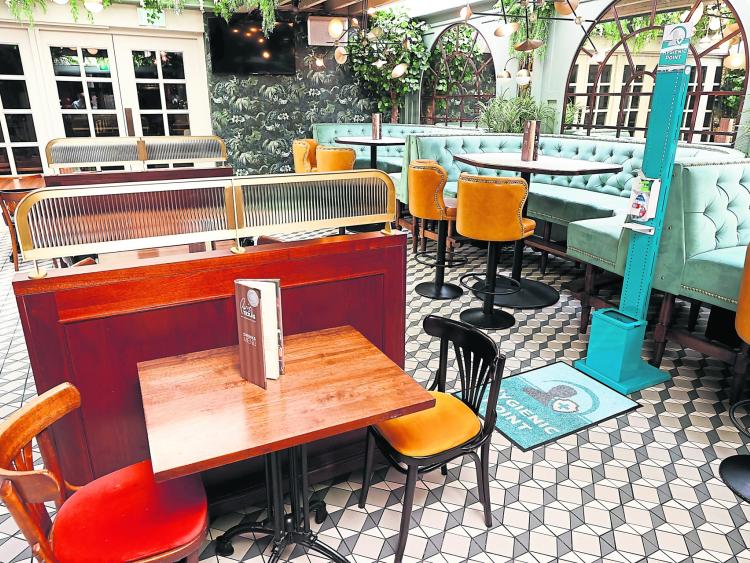 Bars and restaurants such as Paris Texas (pictured) invested in new measures and protocols in order to reopen. However, many are now forced to close again under Level Three

Kilkenny’s all-important food and hospitality industry has been dealt a body blow by the Government’s decision to move the entire country to Level 3 of restrictions.

Many are facing a minimum three week closure, with thousands of staff to be once again sent home despite wide-scale compliance with restrictions that have been in place.

For many establishments, the indoor dining ban and limit to 15 outside mean it is simply not viable to open. Places which have only recently reopened are now closing doors again.

While most in the industry agree that public health must be prioritised, some have questioned the overall impact of the nationwide ‘Level 3’ decision, including for areas which appeared to be faring well.

Pat Crotty, owner of National Pub of the Year, Paris Texas, says it’s hard to argue with medical advice. However, he says that senior civil servants and experts drew up a roadmap to deal with regions and on a county-by-county basis, which now seemed to have been ‘thrown in the bin’.

Mr Crotty noted that significant measures and protocols had been put in place in bars and eateries to comply with restrictions and keep people safe. At Paris Texas, with a large number of staff, and thousands of people coming through the doors since it reopened in the summer, there had not been one confirmed Covid case arising there.

“If we were doing something wrong, someone would have got sick,” he says.

Now, those members of staff who had returned to work, must now go back on the Pandemic Unemployment Payment — along with many others around the county.

Mr Crotty says it is up to everyone — the public, people in the trade, customers. to all do their best: “It isn’t going away in a hurry,” he says.

“Let’s say the numbers are good in three or four weeks, and we ease off again. What happens then? What are we going to do then in ten weeks when we are back in the same situation?

“What have we learned? What are we going to do differently?”
Mr Crotty says that even with the majority complying, there will always be a minority who don’t comply with the laws.

“You deal with them, you give the gardaí the powers to enforce them,” he says.

“You don’t say ‘please stop going over sixty miles an hour — you fine them. There are very simple things we do in every aspect of society that causes the system to work.”

While hotels may remain open under the new restrictions, it’s understood some local hotels are also questioning the viability of doing so. The heavy impact on tourism numbers, and now a ban on travelling outside home counties except under specific circumstances means bookings have fallen off.

Temporary closure
At the weekend, the Newpark Hotel, Kilkenny confirmed that four members of staff had tested positive for Covid-19 and as a result the hotel closed from Monday, October 5. It is scheduled to re-open on Friday, October 9.