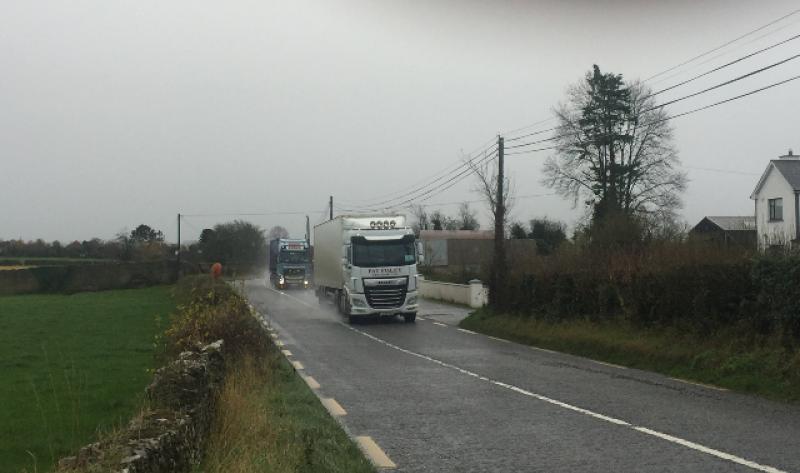 Concerns have been raised over the safety of the N77 Ballyragget Road and the and the roundabout at Hennebry’s Cross.

In the early 90s, there had been a priority in the development plan to investigate both on-line and off-line route options to improve the road between the southern end of Ballyragget and Kilkenny City. It was developed to the stage of preliminary route corridor options.

However, progression of the scheme stopped when priority was given to the interurbans (M9/8 motorways) in the mid to late 90s. The N77 route is not currently listed as a priority road improvement in the development plan and carries a low AADT of circa 6500 for a national road in the vicinity of Georges Tree.

However, local councillor Pat Fitzpatrick says the safety problems have persisted on the road, and the volume of traffic using it is compounding the issue.

“People on the Ballyragget Road are taking their life in their hands every time — they can’t put their nose out onto the road,” he said.

“In some cases, when they are going to Kilkenny, they are heading toward Ballyragget first and turning around and coming back. Cllr Fitzpatrick says the map shows a red spot in the area, indicating an above-average number of incidents on the road.

“A cross-agency approach is needed now, with the gardaí, with the council and the TII to find an engineering solution,” he says.

The council’s road design section was requested to carry out a high-level review of the road in the vicinity of Georges Tree to Ardloo junctions. They have now agreed to see if there are safety measures that can be designed and implemented to reduce the number of collisions along the route, and bring potential solutions to the attention of TII.

Cllr Fitzpatrick also says there are issues at Hennebry’s Cross, where people not familiar with the area are using the roundabout in the wrong direction.

“The road markings are very poor,” he said. “A number of people in the area have reported it to me. That roundabout needs to be looked at. We can’t wait for more accidents to happen.

“Enough is not being done to improve safety on one of the worst roads in Ireland. The volumes of traffic using it are huge.”