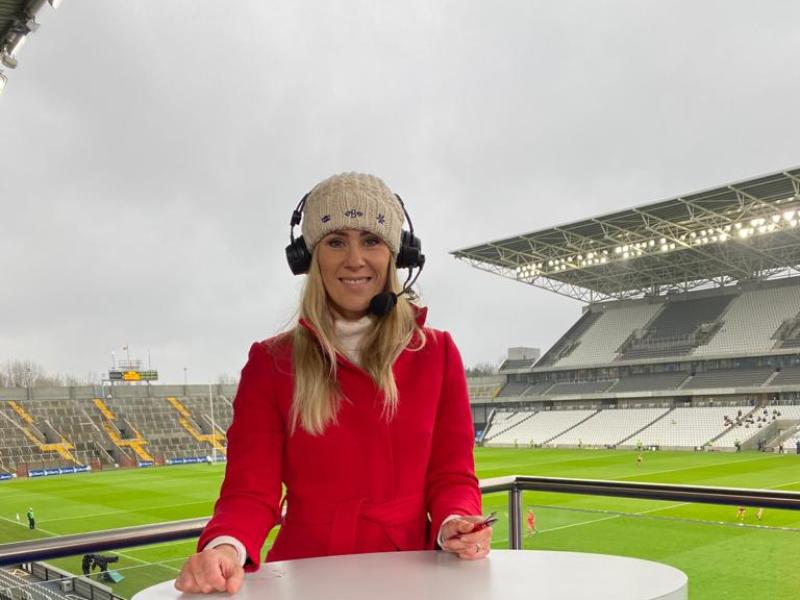 After six years at the Presentation School in Kilkenny, Evanne Ni Chuilinn went on to graduate from Dublin City University with a degree in Communication Studies. She immediately enrolled in a post grad in communications through Irish, at NUI Galway.  As a passionate Gaeilgeoir, the plan was to have a career as Gaeilge, so she applied to TG4. When she didn’t hear back from them, she took pen to paper and wrote to RTÉ.

Fast forward to today and Evanne is one of the most recognised sports presenters on our TV screens. She began her career as a sub editor with RTÉ Sport in 2004 where she worked behind the scenes. Since then she has worked on RTE Sport and RTE News as a sports reporter, and quickly moved to the main sports news presenter on RTÉ News: Six One.  Evanne is a regular face on the Sunday Game, and has travelled to cover the Olympics, and all the major sporting events.

Originally from Bamford Cross in Kilkenny, Evanne now lives in Dublin with husband Brian and their two children Séimí and Peigí. Incidentally the day Brian popped the question, I had a tiny part to play in it!

Evanne had kindly agreed to appear in a PR photo call that I was organising. Unknown to her, Brian was also planning something special on the same day. Two weeks before he proposed, Brian phoned me up and explained (to a complete stranger), how he was going to ask this incredible lady to marry him. However he needed me to play along that she was still booked to do the photoshoot on the same day that he had planned to get down on bended knee.

So Evanne, I am sorry for the smoke and mirrors/lies for two weeks about the so-called gig, it was all for a romantic cause!

Always the professional, a few weeks later, Evanne did come to Kilkenny to do the photoshoot, with a smile the size of Croke Park!

Evanne and Brian’s two children have their parent’s passion for life. The young family is always on the move - either taking part, watching or reading about sport! Evanne is a breath of fresh air, she is candid and honest, sharing snippets of family life on the socials. Educating and entertaining us with her home schooling techniques, arts ‘n crafts and home workouts/obstacle courses with the kids during lockdown.

The relief she bestowed on so many of us parents was welcomed with open arms in her Claire Byrne, regarding home schooling. She relayed back to us the advice her mother, a retired teacher, had given her - “Evanne you are a mother, that’s your job, not a teacher.” On hearing that, there wasn’t another school book opened in my house!

On top of a busy schedule, Evanne completed a Masters in Sports Management in 2016, while pregnant with daughter Peigí. She is a passionate advocate for women in sport. So I caught up with her after Kilkenny’s Senior Camogie Semi Final win on Saturday.

Here is a glimpse into Evanne’s world…

You have had a bumper season, reporting on the GAA championships. How different is the job now for a sports presenter?

Winter hurling was never going to be pretty, we are lucky that we have really good surfaces for the matches to be played on in Pairc Ui Chaoimh and Croke Park.

As a reporter you are never normally able to hear the managers and the selectors giving their orders. When you are at the games they are like challenge matches because there is nobody there on the grounds. So it feels like a challenge game, where there is nothing on the line, but there is everything on the line because it’s a Championship.

I was sitting in the stands with Ursula Jacob and Jackie Tyrrell the night Kilkenny played Dublin. James McGarry was sitting very near us and he went back up the stand to see formations, and he was shouting down to Brian Cody. That’s something you would never see or hear before, it was mad! I felt like I should move away a little bit, that I had too much access to them. Normally you wouldn’t hear a thing with the crowd, but now you are almost in a bubble with the players.

Also I realised how much I rely on lip reading when interviewing someone with a mask on, especially when there is a PA in the background and my director’s voice in my ear!

It was another dramatic weekend in sport and you were at Pairc Ui Chaoimh on Saturday reporting on Kilkenny’s Camogie Semi-Final victory. They are a strong team, can they bring O’Duffy Cup back to Kilkenny this time?

I think they have a great chance, I don’t think that has ever been in question. Any of the finals they have lost have always been so tight and some of it was just really bad luck.

This year they seem to have a closed shop and tight knit group. They are playing with a lot of confidence. On Saturday they didn’t panic, it took them ages to get going and that’s probably because they hadn’t played in so long. They obviously didn’t play in a quarter final because they finished top of their group, they also weren’t tested in their group stage so we didn’t really see what they were made of until Saturday.

It was nearly 11 minutes before they scored, but once they did I thought they didn’t really look back. Their backs had a great game, Claire Phelan played out of her skin, as too did Colette Dormer and Davina Tobin. Ann Dalton’s influence in the first half showed her experience, apart from the scores she made, I think she relayed a message to the rest of the team – look this is what we are able to do. By the second half, all the rest of the team rolled in behind that mind-set and belief.

They have always had the players but for some reason they might have been a little bit of doubt in their minds. Denise Gaule had a great game too and Miriam Walsh is so strong, so I think they have a great chance.

You and your colleague Jacqui Hurley are great advocates for females in sport. Who was your role model growing up?

When I was growing up I had on a pedestal the likes of like Sonia O’Sullivan, Michelle Smith (before we knew what happened about the way she had won her medals), Angela and Ann Downey.

In saying that, I never really felt as a child that ‘sporting greatness’ was possible for a little girl in Kilkenny. I never felt the connection to have that belief because I felt these people were so far removed from my life, so I never felt it was attainable.

For that reason, I don’t know if I would call them role models. They didn’t get enough coverage in the media and I don’t think they were accessible as athletes. Accessibility and visibility is much better now and young girls can believe that they can become great sporting legends.

For me my role model was Mary Robinson becoming our President. I felt more of a belief that I could achieve a career in a professional capacity more than a sporting one.

You shared your own adoption experience in the award winning TG4 documentary ‘Uchtú’. What affect has the documentary made?

We worked on that for a long time Siobhan. The biggest aspect was that the people involved in the programme were represented with integrity and respect.

If nothing else comes out of it - that for me is enough.

I ask this question with the deepest sympathy for you and your family, just after the 7th anniversary of your late brother Cormac. If you could reach out to a families this Christmas, what would you say?

It’s so tough for families this time of year who have been beavered. It’s the time of the year where you want your family close. Covid has made it so much worse for people who are struggling with mental health. We are encouraged to stay apart and to physically stay away from our loved ones.

I don’t have the answers, Cormac was struggling for a long time, we loved him with all our heart but he couldn’t stay. I feel we need to mind each other, to stay close, as much as we can with Covid. That might mean cocooning or being in a social bubble for the Christmas period with somebody who is not feeling well. If there is somebody struggling in your family, you need to bring them into your circle and keep them safe.