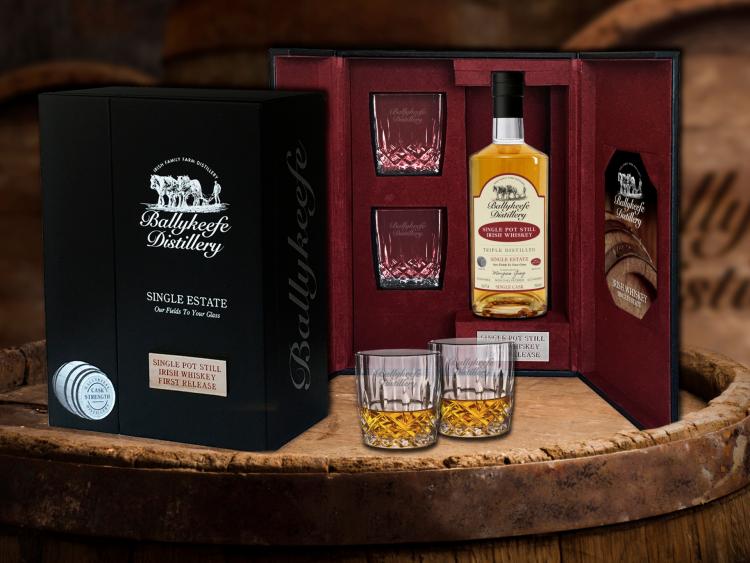 The first bottles of Ballykeefe’s Whiskey, which is a dream that has been in the making for 25 years, has launched for the Christmas market.

According to its makers the whiskey deserves the name of Ireland’s most exclusive as its credentials are truly impressive. Single Farm, Single Estate, Single Cask, unique terroir, eco-friendly and very rare, Ballykeefe has it all and more, when measured against the highest industry standards.

Ballykeefe Distillery is located on the Ging family’s beef and tillage farm, a 15-minute drive from Kilkenny city. It is reviving a centuries lost tradition of family farm distilling, where every drop of Whiskey in a Ballykeefe bottle is triple distilled from barley grown on the farm, making it a 100% ‘field to glass’ operation, known as Single Estate in the industry. In addition to this rare distinction, Ballykeefe is also a multiple award winner for sustainability and a flagship member of Bord Bia’s Origin Green programme.

Morgan and Anne Ging diversified their family farm to include a distillery and Morgan, a renowned workaholic, begins his day at 6am, milling the grain for the first brew and ending at 11.30pm feeding the cattle in the adjacent shed with the spent grains and pot ale, which are the by-products of distilling, as their last meal of the day. This diet, which is part of the sustainability programme, gives the beef a special flavour which is also much in demand. Morgan smiles when he says, “these are probably the happiest cattle in Ireland.”

The distillery built in 2016, is now releasing just seven casks from its first distillations in 2017. Each cask is being individually bottled, with both cask and bottle number handwritten on the label of each bottle, a collector’s dream in terms of rarity and future value for those who hold on to their bottle rather than drinking it.

The exclusiveness and collectability of this first release is further enhanced by the beautiful packaging and presentation, the attention to detail is exceptional. Each bottle is hand engraved by Kilkenny Crystal and mounted in an impressive presentation box with a certificate of authenticity. There is also a sixteen-page colour brochure on the distillery included with every bottle. 500 lucky customers will also be able to purchase cask strength hand engraved bottles, in a presentation box with two hand cut crystal glass tumblers, uniquely designed by Ireland’s oldest family-owned crystal studio workshop, Kilkenny Crystal.

“I am delighted we are working with our near neighbour Richard and his team at Kilkenny Crystal, their exceptionally talented craftsmen are among a very few, who are hand cutting crystal in Ireland,” added Morgan.

Morgan’s love of history is why the first Whiskey produced at Ballykeefe is the traditional Irish Pot Still. This is distilled from a mixture of malted and unmalted barely, which has its accidental origins in efforts to reduce the use of malted barley at a time when it was subject to punitive taxes imposed by the British in the early 1800s. Morgan loves what he calls “this story of necessity and typical Irish ingenuity which gave birth to an especially smooth and flavoursome Whiskey.”

Ballykeefe is an entirely independent, artisan, family-owned Single Estate Whiskey Distillery, which was built in 2016 to diversify a working family farm for successor generations.