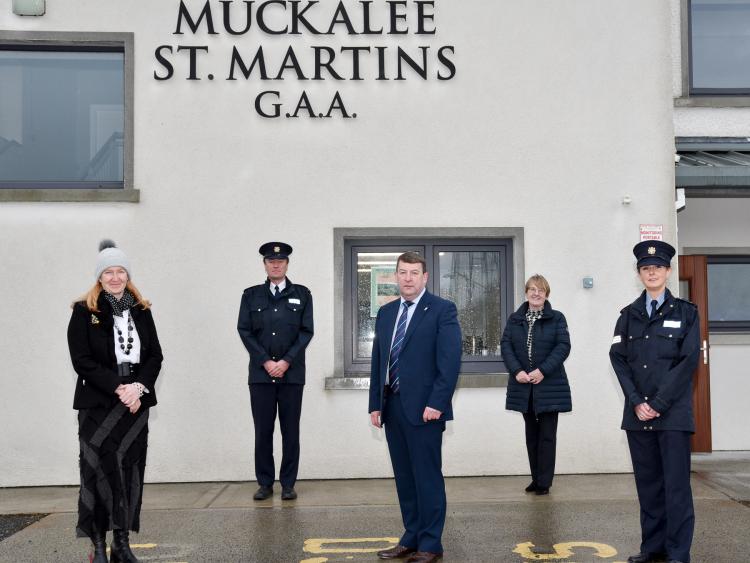 A new project is bringing together the resources and skills of the gardaí, HSE, ALONE and Kilkenny County Council to support the community of North of the county, this Winter.
Project Connect has been launched as a pilot project in the area to make sure no one is left feeling isolated or alone in their homes.

At the launch of the project, at Muckalee GAA club, Superintendent Derek Hughes said the focus of An Garda Siochána is on making contact with the target group, people over 65 in North Kilkenny, and identifying policing needs they might have. That might range from being victims of crime to having a fear of crime.

“We know that the target group can sometimes be a hard to hear or hard to reach group,” he said. “We hope that Project Connect will help An Garda Siochána to reach this group of people.”
He commended Cllr Pat Fitzpatrick for his initiative bringing this forward.

Sgt Fiona Ruth explained how the initiative will work on the ground. Since Monday, December 21, members from Castlecomer Garda Station are calling to the doors of the people who have already received a letter about the project. If these people want further contact it will be ongoing and if they don’t that will be taken on board. Future contacts will be by phone.
Tara Hunt, Manager of Older People’s Services with Carlow Kilkenny HSE said the joint initiative will see who they can support among the vulnerable in the community. The initial list of people to be contacted is taken from the HSE’s database of people in the area who are in receipt of a support service from the HSE.

When gardaí call to the home they will share advice on crime prevention, but can also discuss health, home supports, GP visits and other matters which are important to the elderly in the community.
“We something similar last year, sending out crime prevention leaflets,” said Tara. “We wanted to build on that this year.”

The ALONE organisation is involved in the initiative because of its experience with social isolation issues.
Mary Colclough said she was very grateful the organisation was invited to be involved.
“Our organisation is all about older people,” she said. “We offer social and practical supports.”
When Covid hit, ALONE was the first to have a helpline up and running and received up to 400 calls a day.

ALONE works closely with lots of agencies, like the County Council and gardaí, to offer practical supports to people. They also work with the HSE and organisations like St Vincent de Paul.
“Whatever an older person needs, from fitting out a bathroom to social welfare, we will facilitate getting resources for them,” she said.
“What we would say is ‘no man is an island’ and we need other agencies to work with for the benefit of the older person.”
You can get in touch with Alone, or refer someone else, via their website or call 0818-222024.

Some 110 local people are included in the pilot programme. Anyone who hasn’t received a letter is invited to reach out to the gardaí, HSE or ALONE at any time.

North Kilkenny County Councillor, Pat Fitzpatrick who is also chairman of the Joint Policing Committee, said the initiative came from the committee in an effort to combat rural isolation of older people in the community.
Cllr Fitzpatrick discussed the idea with Supt Hughes, who brought in the HSE and ALONE. He said it was fitting that the pilot project was launched at Muckalee GAA club, deep in rural North Kilkenny.
Cllr Fitzpatrick said he was delighted with the multi-agency approach to the project as it’s the best way to serve the community.