They acted quickly to help save a life 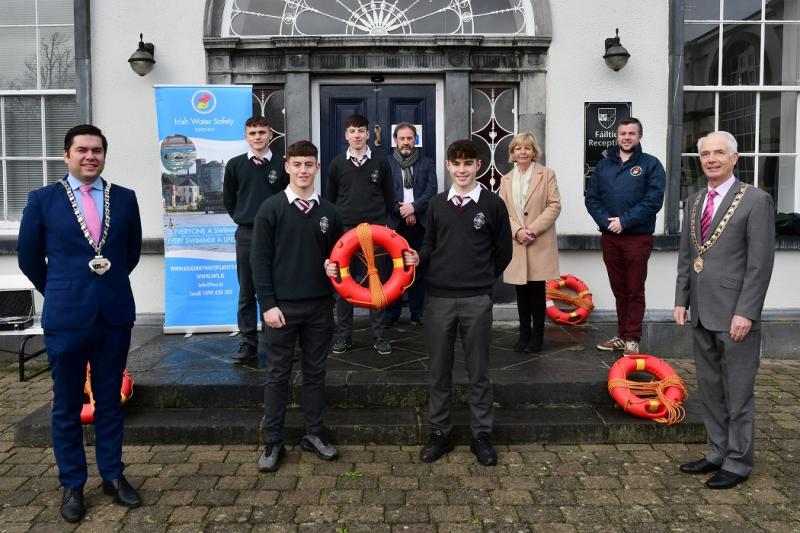 Four CBS students have been honoured with a Just in Time award from Water Safety Ireland for their involvement in a rescue last November.

Tony and Paddy Collins, Ben Tennyson and Conor Hayes were walking on John’s Bridge around lunchtime when they spotted a dark shape bobbing in the water up stream. The following is their own words, as recorded by their TY co-ordinator at CBS, Gerard Morrissey:

“At first we believed it might be a football or even a dog! We immediately rushed down to the bank at the ‘Lemongrass Restaurant’ side of the River Nore and quickly realized that the shape was in fact a man.

“He appeared to be in obvious distress and was attempting to keep himself above water as he was swept on the current towards John’s Bridge. He disappeared from sight for a few moments before resurfacing again further downriver.”

Tony had, by this time, grabbed a nearby lifebuoy. Paddy, his brother, along with Ben and Conor set about helping him to untangle the feeder cord from around it. Paddy then caught hold of it and flung it out towards the man in the water. However, his first throw landed too far away for the man to reach it.

“We quickly drew back in the line and retrieved the lifebuoy. Once again Paddy threw it out. All this time we were moving along the bank trying to keep pace and align ourselves opposite the distressed man in the water.

“Paddy’s second throw sailed over the man’s head and fortunately, as we collectively drew the line across the river, the man managed to grab hold of it as it floated in front of him.

“Together we were able to pull him towards a ladder on the shore located just below John’s Bridge.

“At this point in time two older men came down the bank and assisted us in drawing the man out of the river to safety and we finally helped him up and over the railings onto the bank. Shortly afterwards the Garda Siochána arrived on the scene to assume responsibility.”