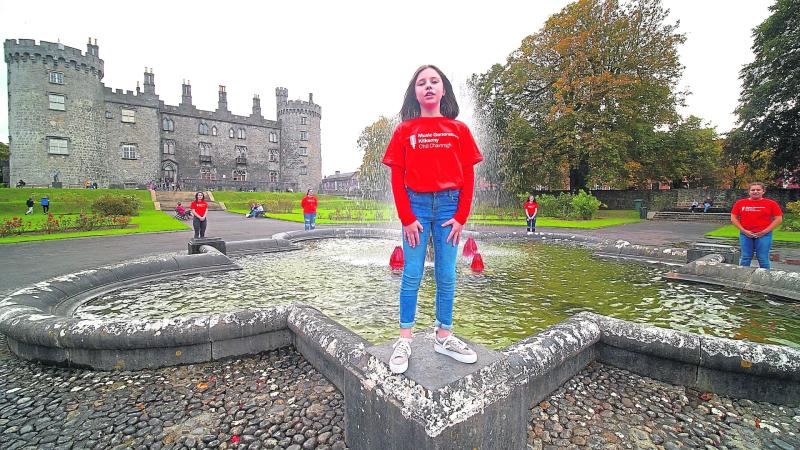 Singers Cathal, Katie, Clodagh, Laura, Charlotte and Enya who all participated in the Music Generation Kilkenny single Feel The Victory

A Castlecomer woman was named New York’s top tech evangelist in November.
Rebecca Kelly received the accolade at the annual Women in IT Awards, which was held virtually on October 29, for championed the use of technology within her organisation, and successfully managing to communicate its merits to a wider audience.

New ‘safe zones’ were put in place outside some Kilkenny city schools. Students returning to school in St Canice’s NS and Loreto Kilkenny after the mid-term break had a more pleasant environment outside the school gates with nearby ‘park and stride’ facilites and the installation of bollards to make space for pedestrians and cyclists.

Garda Ted
Kilkenny Gardaí welcomed a new recruit - Garda Ted. He proved to be a hit both with his colleagues and the public at large.
The cuddly teddy bear became a familiar face on social media and had plenty of sound advice to offer with gardaí encouraging the public to follow suit and ‘Be Like Ted’.

Funding for two major infrastructure projects was good news for Kilkenny - funding of €15.5 million was secured for the new Kilkenny Greenway, meaning the project will now be funded in its entirety, and expected to be completed in 2022.
The county also stands to benefit from the massive investment in Waterford’s North Quays. Four projects in Ferrybank and Belview were included in €80.6 million funding to transform the Ferrybank and South Kilkenny areas, easing congestion and opening opportunities for the region.

JoJo
Family and friends of Jo Jo Dullard gathered at the National Monument to Missing People at Kilkenny Castle to remember her on the 25th anniversary of her disappearance.
After the cancellation of the Savour Kilkenny festival, organisers have pulled off a major coup by lining up some of the country’s leading chefs to deliver winter warmer recipes on Savour’s social media channels - continuing to the middle of January.
Following the unveiling of a memorial to Thomas Woodgate, in October, it led to the solving of a family mystery, to the location of a lost grave, and resulted in two sides of a family - who didn’t know the other existed - establishing contact more than 80 years after three young siblings were split up.