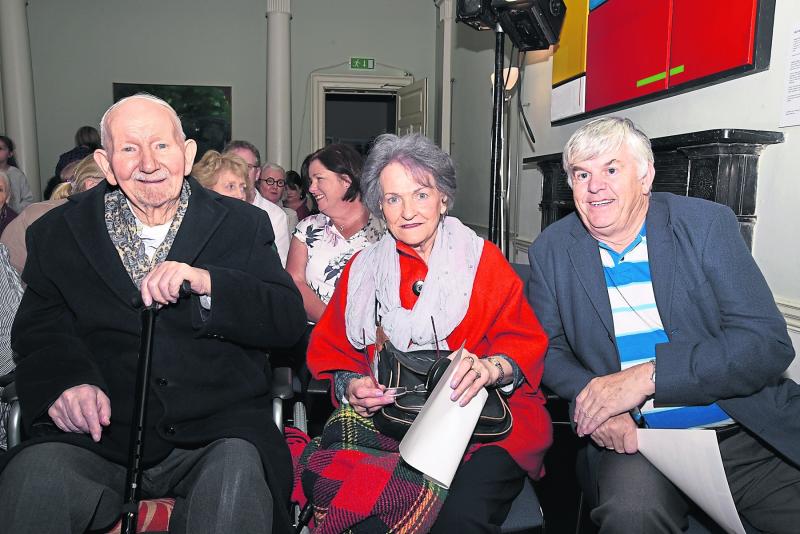 The dedication on the book is short and simple: ‘To my cousin Ger with whom I have soldiered in Poetry and Prose, Seán.’
The dedication is from Seán, also known as Jack, Kenny who departed this world on the last day of December 2020.
Seán was a huge influence in my life. Poet, painter, sculptor, he introduced me to the world of the Arts. As you, Seán, wrote poetry – I wrote poetry. As you painted – I painted. As you sculpted - I sculpted. You enriched my life and from a very early age.
I remember you asking me and your nephew Bobby, my best friend, (we were maybe 10 at the time) what we were reading. “Treasure Island,” Bobby piped up. You were impressed. “The Beano,” I piped up. You laughed. Years later when he asked me the same question I was proud to announce: Oscar Wilde’s ‘The Picture of Dorian Grey’.
Some while after that I began to visit Seán in Wellington Square where I’d watch him paint and occasionally run to Seán Byrne’s for him for a large bottle of ale and 10 cigarettes. In my late teens he encouraged me to exhibit in the annual Local Artists’ Exhibition in St Kieran’s College, organised by the late Fr Joe Delaney, a man he held in the highest esteem. And I vividly remember, after one exhibition, Seán coming to my door waving a five pound note. “For your sculpture, ‘Happy 35th Hiroshima’ (constructed from a wire coat hanger and plastic tea spoons) which was purchased by a lovely young lady,” he smiled; a young lady I subsequently met but that’s another story.
And it was a painting of Seán’s that led me to broadcasting on national radio. ‘Samson in the Temple’ a mural actually, which he’d painted in his sister’s sitting room in Fatima Place (how Kitty McDonald, and her husband Jimmy, allowed it I’ll never know and they with seven children in the house) but ‘Samson in the Temple’ covered an entire wall, and impressed everyone who saw it – including the rent man, bread man, gas man all of whom were invited in to see this awesome mural. It made such an impression on me that 30 years later it inspired me to write my first piece for RTE’s Sunday Miscellany entitled: ‘Samson and Delighted.’
ARTS SHOW
Of course Seán too loved broadcasting and presented the Arts Show on the original KCR (Kilkenny Community Radio) from the ‘cockpit’ out in Ballycallan. He interviewed me once or twice and years later I too would present the Arts Show when KCR moved to their new Hebron premises, from where they now broadcast once again.
And then there were his poetry readings, Upstairs in Hendersons on the Parade, the place jammers with guest performances from Billy Murphy and the late ‘Mock’ Lawlor.
Marvellous. Mighty. Memorable. They don’t do poetry readings like that anymore.
Seán and I enjoyed many a session down the years but I’ll always remember an evening in Andy’s Tavern (after a lunch-time poetry reading in Cleere’s theatre where we read); an evening spent among larger than life ‘characters’ giving me an insight into what a real local is all about.
Seán loved Kilkenny (not least the Kenny connection). He loved local history; loved it so much that for a period he circulated, at his own expense, a pamphlet featuring historical facts about our city and county. One of Seán’s last public outings, if not the last, was at Culture Night 2019 in the Heritage Centre where, with his wife Ann, he listened, oh so proudly, to his 12 year old granddaughter, Anna Walsh, play some Chopin accompanied by her mother Cathy, Seán’s daughter. Cathy dedicated her own beautiful poem, ‘Where Are You Now?’ to him at his funeral service.
And it was a lovely touch that Sean’s presence was acknowledged by Gerry Cody of Lake Productions, a fellow contributor on the night. I too was glad of the opportunity to pay a public tribute to Seán in recognition of his life-long contribution to the Arts in Kilkenny.
Seán inscribed the above dedication on his book: ‘Every Stick and Stone that Stands Kilkenny’ (a favourite saying of his father Bob) which I launched in the packed ballroom of Langton’s in 2003. Much of Seán’s writing is in that book: poetry, prose, biographies, local history.
Much of his life is in that book; a life dedicated to the Arts. Seán Kenny, cousin, friend, fellow-writer, painter, sculptor, broadcaster, rest in peace.
Ní bheidh do leithíd ann arís.