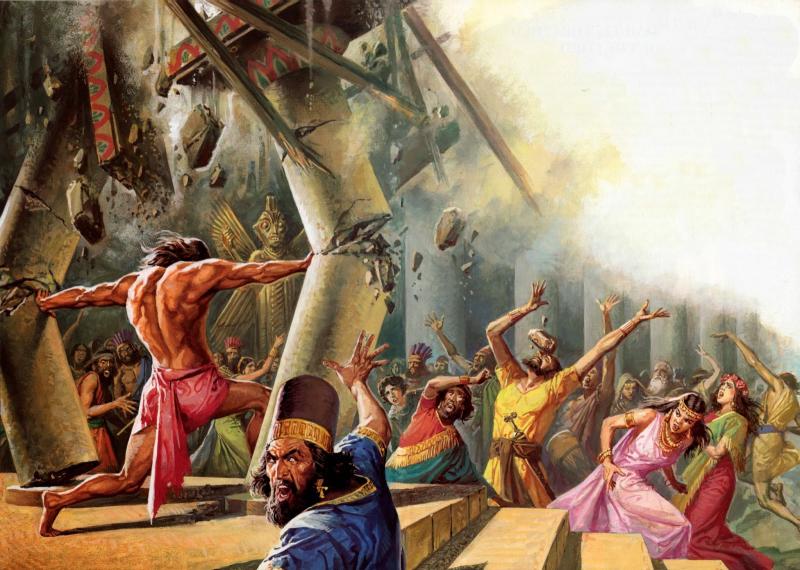 In memory of Seán Kenny. Broadcast on RTE’s Sunday Miscellany August 16, 1998 and August 18, 2000.
Funny the things you grow up with in childhood. Things you never think twice about. Strange things. Unusual things. Things you think are normal.
As a child I grew up with Samson. Samson from the Bible. Brave Samson. Strong Samson. Samson who slew thousands of Philistines with the jaw-bone of an ass. Samson who was treacherously betrayed by the wily Delilah. Samson who pulled the pillars of the temple down upon himself and his loathed enemies.
Yes, of all the characters in the Bible I have huge affection for Samson. My affection for Samson goes back to the late 1950s. I am only a chap, a garsún, and I am standing in the sitting-room of my best friend’s house staring at the outline of a gigantic figure, all seven foot of him, half drawn on the wall.
“It’s Samson in the Temple,” Bobby, my best friend, informs me. “Uncle Seán is drawing it, isn’t it great?”
Over the next few weeks we found ourselves often in that room – the two of us, standing still and silent behind his uncle, watching this massive work of art take shape.
I can see his uncle Seán vividly to this day, standing there, shirt-sleeves rolled, stepping a little to the left, then to the right, searching for the best perspective, a Samson in his own right, lost in the ‘temple’ of his art.
Sometimes we were joined by my best friend’s sisters; at times there might be six or seven of us there, huddled together in silence behind their uncle Seán’s back.
Occasionally he’d get us to pose for him. “Look frightened,” he’d say or “hold your hands like this.”
And we did, thrilled that some small part of us was incorporated into this drawing which covered the wall of my best friend’s sitting-room. And he’d turn then, rubbing his hands together and always he’d say the same thing:
“Well, boys and girls, what do ye think?”. And our reply was always the same: “It’s great uncle Seán, it’s great.”
And it was. It was a marvel. A wonder. One of the seven wonders of the world, as far as I was concerned, though I didn’t know there were seven, or even one, at the time. As children we were in awe of that image of Samson pulling the temple down around him, his eyes poked out, the sockets blacker than his despair as the pillars crumbled about his mighty, but broken, frame. In our childish minds we tried to feel his anguish, his pain, his sense of betrayal.
And we marvelled at his last, defiant, act of self-destruction; how he pooled his last drop of strength to snap his chains and tumble those massive pillars, bringing great slabs of stone crashing down upon himself and his enemies.
ONE OF US
Over the years we grew accustomed to the image of Samson in the Temple. We were so familiar with him now that he was almost one of us. We tricked and fooled beside him, ate bread and jam at his feet, played tig and swapped comics next to him.
Nappies were changed under his nose, birthday, christening and Halloween parties were celebrated in his presence. And, no doubt, some serious marital conversations took place in his company in the still hours of the night.
Children came and went. Cousins called, neighbours visited. Samson had become one of the family. Milkman, bread man, gasman and rent man were each, in turn, introduced to Samson.
What they made of him we never knew. Or cared. And never, not once, did it occur to us that there was anything remotely strange or unusual about having an entire wall of a sitting room covered with a larger-than-life scene from the Bible. How many homes, back in the 1950s, had even a painting on their walls apart from the obligatory Sacred Heart or Virgin Mary?
And if at times I wonder where and how I developed an interest in art, perhaps I should look no further than McDonald’s sitting room and their uncle Seán, shirt-sleeves rolled, toiling quietly and intensely away with his charcoals and crayons, immersed in the world of creativity and expression.
In 1966 my best friend and his family moved to Carlow. The painting came down and to this day I have no idea what became of it.
That giant image of Samson, however, is etched forever on my memory, a fitting tribute to my best friend’s uncle Seán and his parents, adventurers in the world of art in Ireland of the fifties.