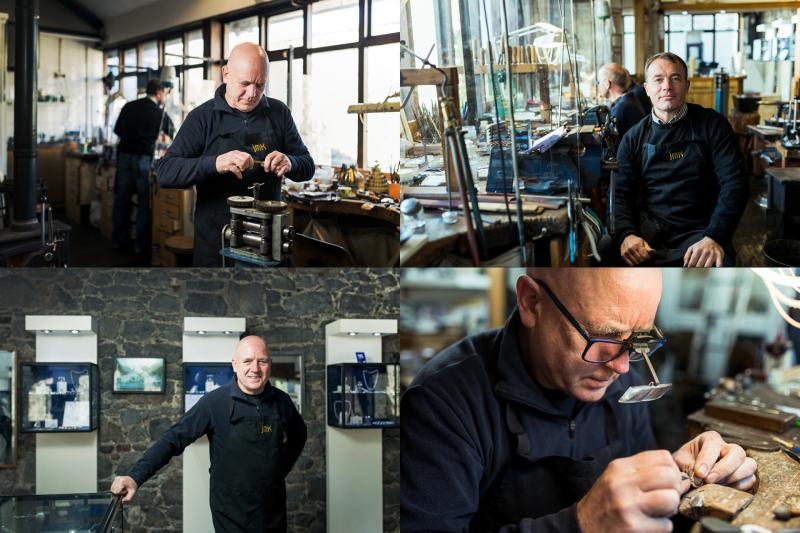 This season of twelve commissioned abstract short-films featuring artists and creatives is the second phase of the cultural project is available to watch on the TG4 player.
The short films are a visual and audio experience depicting the artistic process of some of Ireland's hidden creatives. These are our unique and vibrant artists, makers and doers, based in our towns, our villages throughout Ireland.  Through these films, the viewer will gain a new and detailed perspective on how the artist prepares and develops their work in an intimate stylised form.  Among the creatives featured are Kilkenny goldsmiths James Mary and Neill Kelly. From their forge in the shadow of Kilkenny Castle these specialist Goldsmiths are at work creating bespoke custom-made jewellery by cold forged hand fabrication. James Mary’s interest was sparked after a school trip to Kilkenny Design where he was very impressed with the metal works on site. After approaching the workshop manager to ask for a job James Mary was successful. He was later offered a goldsmith scholarship to Germany which James Mary says was invaluable.

With the closure of Kilkenny Design Workshops in 1988 James Kelly and Des Byrne were involved in a management buyout of the metal workshop, with a view to establishing two independent workshops within the complex DAB and JMK. They have both been very successful since and the businesses have prospered. Among their creations are the Liam McCarthy cup made by James Mary, which has had many a trip back to Kilkenny since, and the Sam Maguire Cup made by Desmond. Other works have included gifts for Popes and one work in particular that stands out for James Mary was the Tabernacle he made for Armagh Cathedral. James Mary recalls Cardinal Ó Fiaich being very impressed with the creation. Neill Kelly decided to follow in his father’s footsteps after studying a Grennan Mill craftcourse in ’91 and has worked and studied under some of the best Goldsmiths since. They have seen a shift in the markets over the decades and James Mary says that they are required to keep diversifying their products to satisfy the market demand.