Where will it snow, when and how much?  Met Éireann has the LATEST forecast on the #SNEACHTA

The forecaster also says there is a change on the way 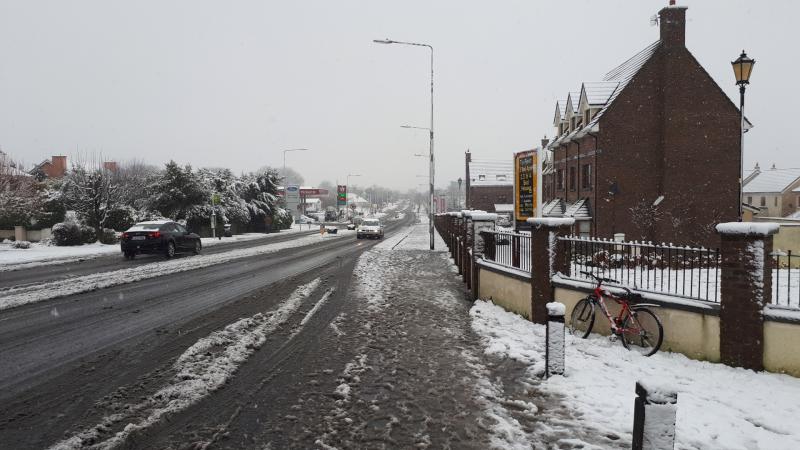 Met Éireann has tweeted charts and issued detailed updates of when the snow will arrive where it will fall and how much to expect along with update forecast on how long it will the cold snap last.

The animation below runs from midnight Wednesday to Friday afternoon. Met Éireann says the blue/yellow/wine colours mean rain while the white/green represents snow. It adds The heaviest snow will be over high ground in Munster and south Leinster. More below tweet.

Will it snow where you are tomorrow?
If so, what time and how much? ☃️
The animation below runs from midnight tonight to Fri afternoon.
Blue/yellow/wine colours = rain
White/green = snow
The heaviest snow will be over high ground in Munster & south Leinster.#sneachta pic.twitter.com/FQHKApPcW9

The forecaster also says the front slows down as it crosses Ireland, so it won’t reach the east coast until evening. MORE BELOW TWEET ON  THE WEATHER WARNINGS.

Tomorrow a band of rain, sleet and snow will gradually push northeast across Munster, Connacht & Leinster with 5cm of snow in some areas ❄️⚠️ Weather warnings issued - https://t.co/el5R3hq1vK

The latest view from space shows tomorrow's rain & snow to the west of Ireland ️ pic.twitter.com/knQoqk7vVk

Met Éireann has issued weather warnings for snow ice and wind for the next couple of days.

A Status Yellow - Snow/Ice warning is in place for Munster, Connacht and Leinster. Met Éireann says a band of sleet and snow spreading northeastwards during Thursday giving snow accumulations of up to 5cm in some areas (higher over the mountains).

While it will transition to rain in the west and south on Thursday night, the alert is valid from 8 am on Thursday to 8 am Friday, February 11-12.

The forecaster has also issued a Status Yellow wind warning for the three provinces. It says strong to gale force southeast winds in conjunction with rain, sleet and snow will lead to poor visibility and hazardous conditions.

The warning is also valid from 8 am Thursday to 8am Friday. MORE ON WHAT TO EXPECT IN DETAIL INTO AND BYOND THE WEEKEND BELOW TWEET.

Here is our 10 day Atlantic Chart, showing the pressure and precipitation forecast in 6 hour intervals.https://t.co/9Giuj4CR5mhttps://t.co/9gKN6SVok4 pic.twitter.com/iB9yBpH2b6

The NATIONAL FORECAST issued by Met Éireann at 7.38 pm on Wednesday, February 10.

THURSDAY: Sleet and snow in the southwest tomorrow morning will gradually extend northeastwards across Munster, Connacht and south Leinster through the day, with snow accumulations leading to some hazardous conditions. Snow will turn to rain or sleet in southern and southwestern coastal areas. Remaining mostly dry elsewhere with sunny spells, although cloud will increase later. It will be windy and very cold with highest temperatures of 1 to 3 degrees, with an added wind chill factor due to fresh to strong and gusty southeasterly winds. Winds will be strongest in the west and southwest.

Sleet and snow in Munster, Connacht and Leinster early on Thursday night will become largely confined to Leinster overnight, with rain persisting towards the south coast as temperatures increase here. Staying breezy with fresh and gusty southeasterly winds, strong near all coasts. Lowest temperatures of -2 to +1 degrees.

FRIDAY: Some lingering falls of sleet or snow in Leinster on Friday morning, while rain continues in southern coastal counties. During the afternoon, a band of rain will move in across the western half of the country, possibly turning to sleet or snow in the northwest. Fresh and gusty southeasterly winds will continue on Friday, strong near all coasts. Highest temperatures of 4 to 8 degrees in Munster, but staying colder across the rest of the country with highs of 1 to 4 degrees.

A wet and windy night as rain spreads countrywide, falling as sleet or snow in Ulster and parts of north and east Leinster. Rain will be heavy in southern coastal counties with a risk of some flooding. Lowest temperatures of 0 to 4 degrees generally, but less cold in the southwest with lows of 5 to 9 degrees. Southeasterly winds will be fresh to strong and gusty.

SATURDAY: Saturday will be wet and windy. Further falls of sleet and snow in Ulster and parts of north and east Leinster at first, before transitioning to rain later. Rain will again be heaviest in southern coastal counties, maintaining the risk of flooding. Staying cold in Ulster and Leinster with afternoon temperatures of 0 to 5 degrees, but turning milder in Connacht and Munster with temperatures reaching 6 to 11 degrees. Southeasterly winds will continue fresh to strong and gusty.

It will stay wet on Saturday night, with heavy rain in many areas giving a risk of flooding. Fresh to strong and gusty south to southeast winds will ease in most areas overnight. Lowest temperatures of 3 to 8 degrees.

SUNDAY: Becoming drier in many areas on Sunday morning, but more rain is then forecast to move up across the country, heavy at times. Becoming breezy again too, with fresh and gusty southerly winds developing. Highest temperatures of 5 to 11 degrees, coldest in Ulster.

OUTLOOK FOR NEXT WEEK: Staying very unsettled with further spells of wet and windy weather.