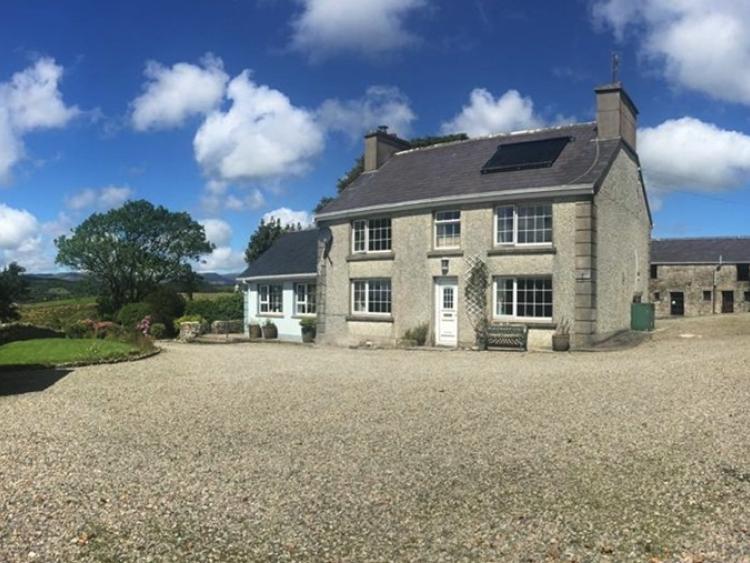 This Donegal farmhouse with hostel and outhouses could be yours

An Irish family is raffling their traditional farmhouse with an adjoining hostel in the hope of raising funds for lifesaving equipment at Beaumont Hospital.

They are doing so in memory of their beloved parents Ben and Lyndall Gallagher who died within eight weeks of each other in 2018.

Their family home in Bruckless, Co. Donegal holds many cherished memories for the sisters. They hope that by raffling it and including a cash sum in the prize, another family can build a good life for themselves and make their own precious memories.

Tickets for the farmhouse in Bruckless with an adjoining hostel and outbuildings and stunning views over Bruckless Bay and the Wild Atlantic Way are only STG£10 each. Furthermore, the winner also gets STG£50,000 cash to help them get started in their new home.

But this is about much more than the property.

Susan Ryan explained why she and her sisters made the decision to donate up to STG£75,000 from the proceeds to the Beaumont foundation.

“My Mum and Dad died within eight weeks of each other in 2018,” she said. “Mum had a brain tumor and Dad had lived with a spinal injury for a lot of his life. He had an accident in Australia many years ago and had to totally learn to walk again.

“It was normal to us, growing up knowing what it was to live with a spinal injury. It was part of our lives.

“When Mum got a brain tumor, the team at Beaumont were able to extend her life by 18 months. We want to support the work of the neurological department there. It is amazing what they do. They are geniuses. Give them the right equipment and they  perform miracles.”

One such miracle was the highly skilled procedure that gave Lyndall an extra 18 months of life, and gave her family that precious time with their beloved mother.

The procedure is called ‘Asleep/awake/asleep stealth guided craniotomy and sonowand guided and 5ALA guided debulking of a left frontal glioma with intra operative monitoring.’

In order for the tumors to be cut away without incurring brain damage that would have left Lyndall mute, she had to be awake and in conversation during surgery.

“She was very brave to do it,” said Susan. “It is incredible what they can do.”

When Lyndall got the bad news in 2018 that the tumor had returned and she had between six and twelve weeks to live, her husband Ben was already ill. He died a week later.

In what was a very tough time for the family, Lyndall went into hospice care because of the complexity of her illness. She passed away just eight weeks later.

The family will never forget the care received by their parents at Beaumont Hospital.

“They gave so much care and empathy and support to all of us,” said Susan.

A story she read on the Beaumont Foundation website and Facebook page set her plans to raise money in motion.

“I read that a family had donated €100,000. They used that money to buy a piece of equipment that saved the life of a 16-year-old girl. I thought, ‘that could have been my 16-year-old daughter.’

“I knew that I wanted to do something to help but we are just ordinary people and we don’t have that kind of money.

“I spoke to my sisters. The house was sitting empty and we decided that we could raffle it and donate some of the money to Beaumont in honour of our parents. STG£75,000 when changed to euro and with the gift benefits would work out at €100,000.

“It means so much to us that our family home where we grew up could be used to save someone’s life.”

The siblings have also decided to include in the prize the sum of STG£50,000.

“We all have our own homes,” said Susan. “The money from the house raffle would help the four of us to pay off our mortgages.

“And we really like that idea that our home could be the start in life for some other family and we didn’t want that to be a burden to them so we felt it was the right thing to do to include the cash.

“It is a risk. We could end up losing money but we really hope that enough people will want to win the house. They could start a nice business there with the hostel and the campsite.”

“It gave Mum and Dad a start, and now it could give some other family a start,” said Susan.

Tickets and further details are available at https://raffall.com/193700/enter-raffle-to-win-donegal-coastal-property-50k-hosted-by-susan-ryan