The widow's plea: An oft-forgotten victim of a famous Kilkenny ambush gone wrong 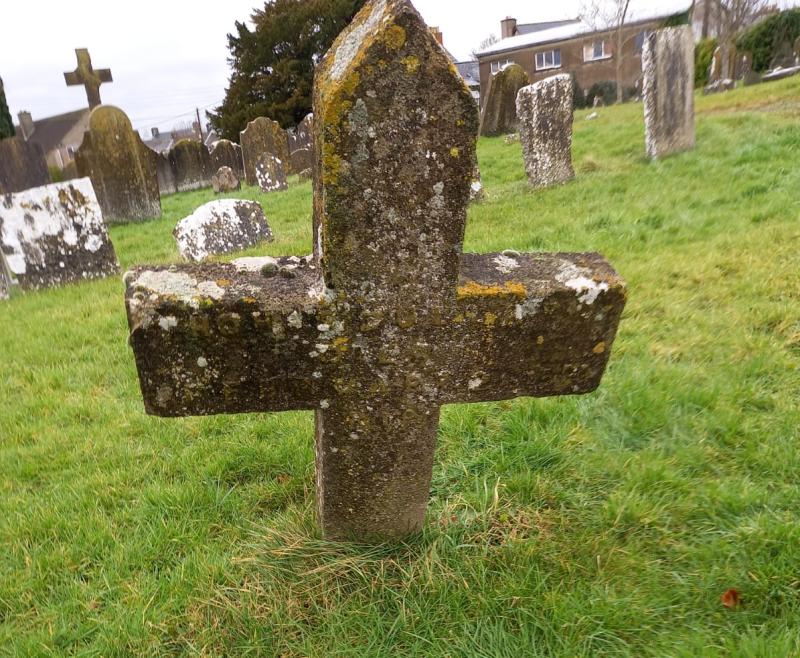 Thomas Dollard’s gravestone which is to be reset upright

“At 9am he had his breakfast with me at own house in Upper Walkin Street, and went off to his work about 9.30am. I did not see him again alive.”
— Widow Bridget Dollard’s statement to Military Court of Enquiry, Kilkenny, February 22,1921.

Over the course of the next few minutes one man would die, and two would lie mortally wounded just feet away from where this family breakfast had just taken place.

(In January 1919, following a landslide victory in the previous December’s election a new government was set up in Dublin, Dail Eireann which had declared Ireland an independent nation. By 1920 British authority was collapsing and in an effort to regain control Emergency powers and later Martial Law were declared in much of Southern Ireland.

It was becoming an increasing nervous and violent society as attacks and reprisals by the IRA and the authorised military apparatus of the Royal Irish Constabulary, the Auxiliaries and Army continued. Kilkenny, as a traditional barracks town, would not escape unscathed in these troubled times.)

Each morning, following the same timetable and same route, a limber carrying rations for Kilkenny Gaol would leave the military barracks on Ballybought Street and travel via John’s Street, Rose Inn Street, High Street, and Friary Street, making its way to Kilkenny Gaol.

Protecting this limber were seven soldiers of the Devonshire Regiment, divided into three groups. An advance guard of two Privates marched 50 yards in front, the main guard directly behind the cart, comprising two Privates and one Lance Corporal, and approximately 50 yards behind a rear guard of again two Privates. This guard would be armed with loaded guns and fixed bayonets.

Such an obvious display of weapons would prove a tempting target for the local Volunteers, and a plan for an ambush was drawn up by Timothy Hennessy a Threecastles man and the Officer Commanding the First Battalion of the local IRA. It was agreed to use men from outside the city for the engagement, so as to avoid anyone being recognised. A group of 14 men from Bennettsbridge, Kells, and Threecastles was decided on. 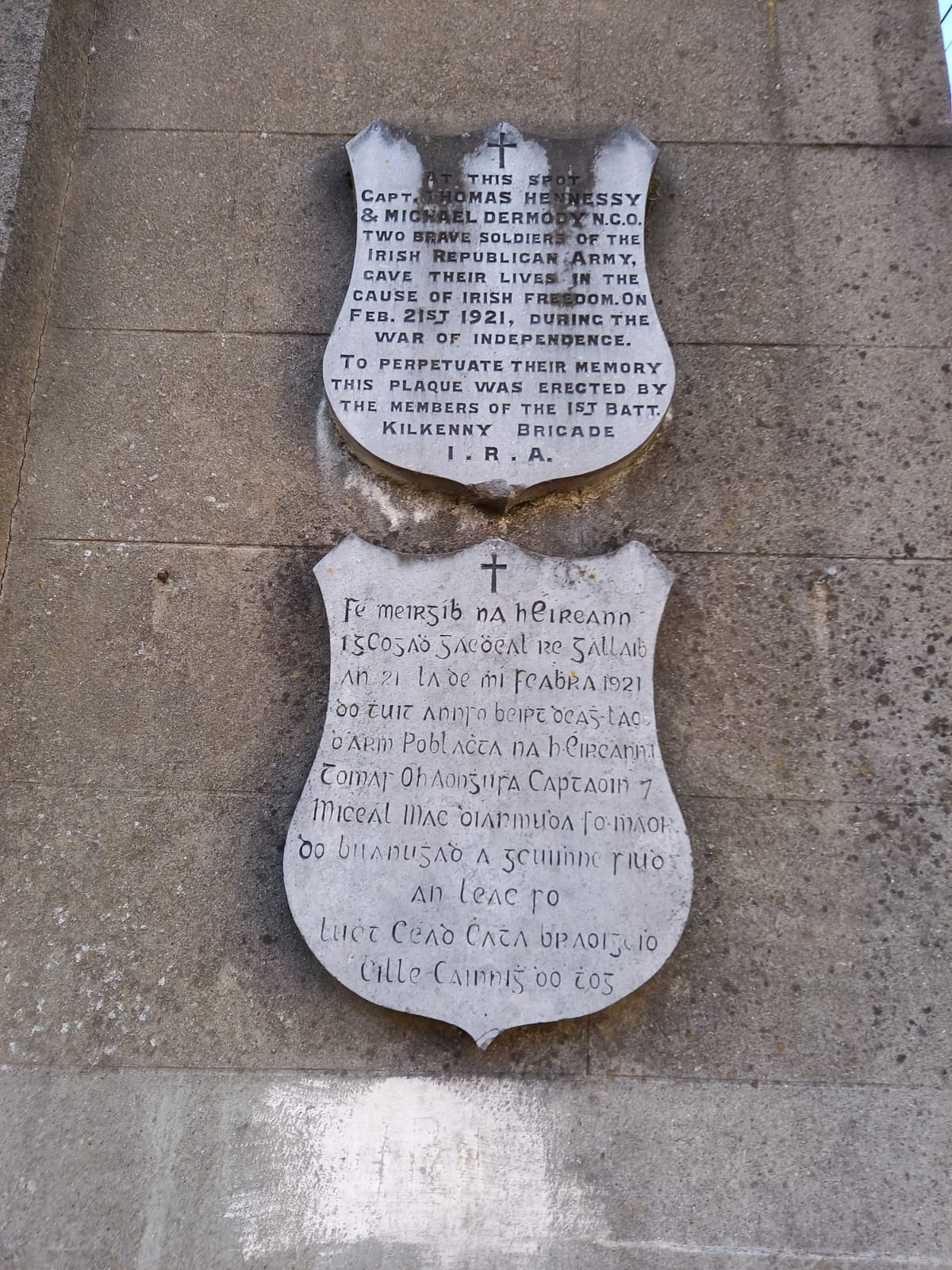 The commemorative plaque on Friary Street, with no mention of Thomas Dollard

Monday morning, February 21, was the agreed date to execute the planned ambush. Orders were given by Hennessy that his men would not shoot the soldiers but instead attack and physically overpower them with the intention of disarming them.
At 9.15am that morning RIC Constable 60852 James Grey, who lived on Friary Street, looked out his window and later recounted how he noticed two men acting suspiciously on Pennyfeather Lane, who then walked into Friary Street. These men would later be identified as Volunteers Thomas Hennessy and Michael Dermody, part of the Threecastles’ group. Further up the street the Bennettsbridge men had taken up position at Hackett’s pub while the Kells men were lying in waiting at Gargan’s stoneyard.

Thomas and Bridget Dollard having breakfast were blissfully unaware of the events unfolding around the corner from their house. All accounts in the British archives file wo/151a/58 agree that around 18 civilians, men, women and children were also on the street that morning.

It had been agreed that the signal to start the ambush would be a whistle blast by Jim O’Brien, stationed at Gargan’s yard once the ration convoy was in position on Friary Street.

For reasons unknown, before the blast could be sounded, Volunteers Hennessy and Dermody rushed at the rear guard with their revolvers shouting “hands up”. A violent struggle followed as Privates Arthur Stanley Gay 5608839, and Harry Hawthorne 5608844 both of the Devonshire Regiment wrestled with the two Volunteers to keep possession of their rifles.
Private Gay would later reported of his struggle with Dermody: “The assailant seized my rifle with his other hand. I held onto it. He then wrenched the revolver out of my hand, pointed it at my chest and I heard it click.”

Meanwhile, Lance Corporal Ernest Higgins heard a woman shout that they were under attack, and went back down the street, he took aim and fired a shot.

Michael Dermody fell forward. More shots rang out in quick succession, and Thomas Hennessy too fell to the ground. The people who had been on the street were running to escape, and a civilian male suddenly appeared about 25 yards down the street near the Friary, another shot was fired and he too fell.

The other volunteers — seeing that their plan had failed — made their escape on bicycles that they had left at Brennan’s pub, and St Mary’s Cathedral. Constable Gray rushed out of his house to see men lying in the street. The limber continued towards the Gaol to get reinforcements.

A search of the bodies found one dead from a shot to the abdomen, and the other two with severe head wounds and unlikely to survive. At 10am Captain Sinclair of the Royal Army Medical Corp arranged an ambulance to transport them to the army barracks. Reinforcements from the gaol had by now arrived and sentries were placed on the street to keep people away.
Bridget Dollard soon discovered that the third casualty was her husband Thomas, who had just left their house to go to work in the corporation. At 11am he lost his fight for life, leaving her now a young widow with five small children — the oldest, 15-year-old Bridget, followed by Statia, Kate, Nicholas, and baby Thomas, just six months old.

Their life together had begun when on Monday, May 22, 1905 she (aged just 18) and Thomas had wed in St Mary’s Cathedral. Both had grown up in the Callan Road and Walkin Street area of the city and it was there that the newlyweds started family life together. Seven children would be born but two died in infancy.

Tragedy had stuck the family when Thomas’ brother, Nicholas — a Private in the 1st Leinster Regiment — died of wounds in Ypres, Belgium on April 24, 1915, and now a bullet from a British army gun had claimed Thomas. Little did the man who fired it know — believing Thomas to be part of the ambush gang — that Thomas had himself completed six years of service between the local militia and as a Private in the Royal Irish Regiment, receiving an honourable discharge in July 1908.
The next morning Bridget had to attend Kilkenny Barracks for an enquiry in lieu of an inquest into the shootings, and formally identified her husband’s body. After many witness statements, the findings concluded that both Thomas Hennessy and Thomas Dollard had died due to gunshot wounds.

Private Hawthorn had fired at Dollard thinking he was one of the attacking party. The military refused any responsibility for his death stating he had only himself to blame as he was running away from the scene of the ambush. The other Volunteer Michael Dermody never regained consciousness from his head wound and died on March 4.

It was reported in The Kilkenny Moderator of April 23, 1921, that at the previous weeks Kilkenny Quarter Session in front of His Honour County Court Judge O’ Brien, Bridget Dollard had applied under the provisions of The Workmen’s Compensation Act for £2,000 for loss of her husband’s earnings. It was recorded that Dollard went to work each morning as a Corporation worker at 7am, returning home for breakfast at 9am.
He returned to work at about 9.45am. He had a habit of stopping into the Friary on the way to say a prayer. It was while leaving the Friary on the morning of February 21 that the ambush occurred, and as he ran away he was shot. Witnesses from the military party that day were called and stated no arms were found on his person.

Captain Sinclair declared that his wounds had been caused by a ricocheting bullet. After deliberation, His Honour came to the conclusion that the death had been accidental and expressed his sympathy to Mrs Dollard, but no compensation would be awarded to her. The widow’s plea for aid had fallen on deaf ears.

In the years that followed life continued to be a struggle for the Dollard family. Her oldest daughter Bridget passed away in April 1924 aged just 18 years — always delicate she had developed TB. On Christmas Day 1931 Bridget herself died of kidney failure.

Thomas Dollard’s tragic demise as part of the events in Friary Street had almost been forgotten. A plaque erected at the scene makes no reference to him, and on the first anniversary of the ambush, with the Volunteers now in charge of Kilkenny Military Barracks, a parade of the comrades of Hennessy and Dermody marched to the Friary for a service to remember them. During it, no mention was made of Dollard despite the fact he had been shot just outside.

One hundred years on from those tragic events it is very appropriate that Kilkenny County Council hold a civic ceremony to remember Thomas Dollard at the site of the ambush.