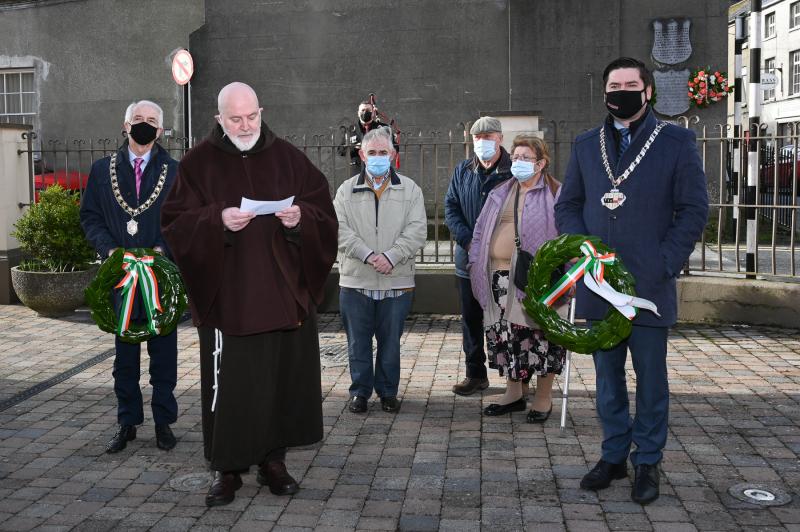 The descendants of an innocent victim of the Friary Street Ambush were among those who gathered, observing social distancing, for a special ceremony to mark the event’s centenary.

Sunday, February 21 was 100 years since the fateful events of the ambush, in which three people lost their lives. On the anniversary, Mayor of Kilkenny John Coonan, and Cathaoirleach of Kilkenny County Council, Andrew McGuinness took part in a wreath laying ceremony at the site.

The commemoration arose out a Notice of Motion put forward and unanimously agreed by the elected members at a meeting of the Municipal District of Kilkenny City.

“I am honoured to be here to remember and commemorate two local IRA Volunteers, Captain Thomas Hennessy and Michael Dermody and in particular one innocent civilian, Thomas Dullard who sadly lost their lives during the Friary Street Ambush on February 21, 1921 —100 years ago today,” said Mayor Coonan.

“History has told us that it was never the intention for this ambush to result in fatalities but however, in the course of events the result was three fatalities. I welcome John Dullard, a grandson of Thomas Dullard and extended family as we lay a wreath today in remembrance of Thomas Dullard, Captain Thomas Hennessy and Michael Dermody.”

Thomas Dullard worked as a supervisor with Kilkenny Corporation. He was a father of four children and got caught in the crossfire of the ambush as he was leaving the Friary Church.

A short film telling the story of the historical events that took place at Friary Street during the War of Independence has been produced by retired army Commandant and military historianLarry Scallan, funded under Kilkenny County Council’s Community Strand of the 2020 Decade of Centenaries Programme.

The film was officially launched by Cllr Andrew McGuinness at the wreath laying ceremony. It is available for viewing on the council’s YouTube channel.