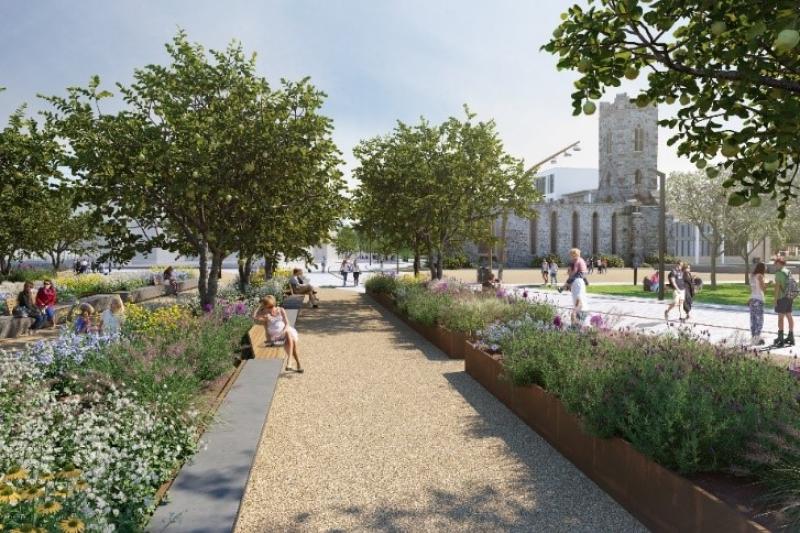 The vision for Kilkenny's Abbey Quarter has been given a significant boost with the granting of planning permission for a major portion of the proposed site development today.

Kilkenny County Council has welcomed the decision of An Bord Pleanala to grant planning permission for the development of the urban park and street which will run through the site.

"The proposed Urban Park and Street are key elements of this public realm strategy and will enable the public to enjoy the riverside location and appreciate the rich built and natural heritage of the  former Brewery site. With planning in place we move a step closer to seeing the project delivered and the creation of spaces  that locals and visitors alike will enjoy for many years to come.”

The proposed park, over two acres, centred around St Francis Abbey and incorporating the City Walls, Evans Turret and St Francis’ well, will be the focal point of the Abbey Quarter development.  St Francis Abbey, has long been of interest to the people of Kilkenny and visitors alike, but the National Monument was inaccessible, locked behind the gates of the brewery.  The proposed development will now open up access to the Abbey and will provide a very significant amenity area for the city.

Tony Lauhoff, Senior Engineer, outlined that “the design of the park has been heavily influenced by the archaeology of the area and has been progressed in close consultation with the National Monuments Service.  Extensive archaeological excavations were undertaken in the area of the park in 2017 further adding to the extensive historical records of the site that have been incorporated into the Abbey Quarter Archaeological Strategy.”

While the upstanding remains of St Francis Abbey will be the centre piece of the park, the below ground remains of the former Abbey will be reflected in the paving and landscaping of the park, with the location of St Francis’ well to be represented by a  water feature.  The area has been designed to facilitate outdoor events including the temporary installation of a Spiegel Tent. The space  will accommodate Kilkennys many festivals and presents an opportunity for our festivals to extend further through the city, spreading their economic impact.

Billy Murphy, Chairman of Abbey Quarter Development Co. on hearing the announcement commented:  “The planning decision on the park and street project comes at an exciting time for the overall Abbey Quarter development.  Works of Phase 1 of the Plan are well underway. Today’s decision allows us to plan for the delivery of Phase 2. The delivery of the street and park amenity will contribute to encouraging new investment into the city centre and connect the site to the core of the City. This project when delivered will support the vibrancy of the City Centre”.

The Riverside Garden project, which will create a riverside walk from the Tea Houses at Bateman Quay to Greensbridge, is nearing completion, with works currently suspended on site due to the current COVID restrictions on non-essential construction works.  It is hoped that these restrictions will be lifted in the coming weeks and the riverside walk will be completed in early summer providing a great amenity in the city centre and providing the first opportunity for public access to the former brewery site.  Work on the first building on the site, the Brewhouse Building, and the associated redevelopment of Horse Barrack Lane, whilst also currently suspended due to COVID restrictions, is also expected to be completed during the summer months.  Tender documents will  be issued in the coming weeks for the redevelopment of the former Mayfair Ballroom as the new City Library with the library expected to be open in mid-2022.

Colette Byrne Chief Executive of Kilkenny County Council said the “Council will now proceed to prepare the detailed design and tender documents for the Urban Park and Street project, with a view to construction work commencing in 2022, subject to confirmation of funding from the Urban Regeneration Development Fund”.