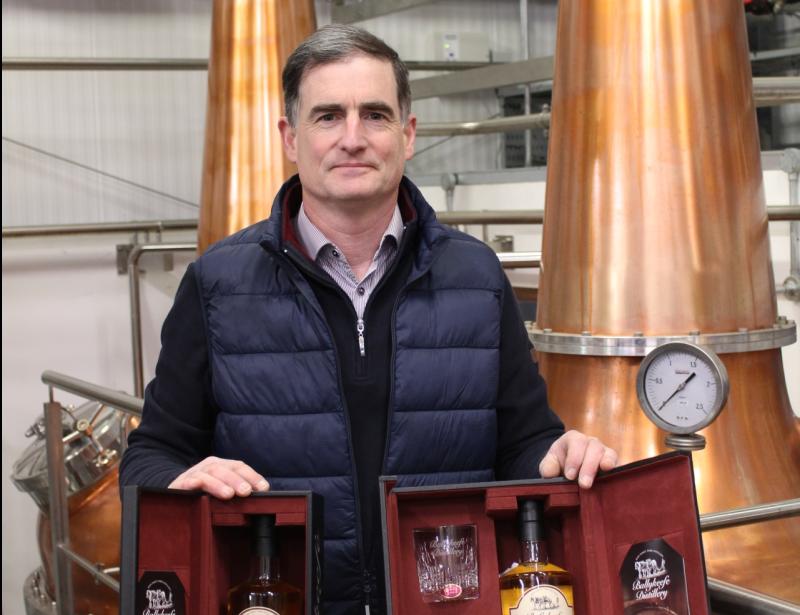 A unique collaboration between three local businesses marks the eagerly-awaited release of a new Kilkenny-produced whiskey.

Ballykeefe Distillery, Ireland’s first Eco-Friendly family farm distillery, has announced the launch of its first pot still Irish whiskey. The distillery, which was built in 2016 and began production in 2017, has released for sale 350 bottles at Cask Strength and 700 bottles at 46% Abv drawn from seven casks of the premier distillations.

The cask strength bottles come with a larger presentation box which includes two hand cut crystal glass tumblers, uniquely designed in partnership with Kilkenny Crystal, which is Ireland’s oldest family-owned crystal studio workshop. The Wine Centre has been chosen as the exclusive in-store and online retail partner for the limited release.

“I am delighted we are working with the team at Kilkenny Crystal,” said , Morgan Ging, owner of Ballykeefe Distillery.

“Their exceptionally talented craftsmen are among a very few who are hand cutting crystal in Ireland. The Wine Centre in Kilkenny has been chosen as our sole retail partner, for this release, due to our longstanding relationship and their expert knowledge.”

Located on the Ging family’s beef and tillage farm, Ballykeefe Distillery is located near Cuffesgrange, 15 minutes outside Kilkenny City. The distillery was introduced to diversify operations in response to longstanding issues and uncertainty in the farming industry. Every drop of whiskey in a Ballykeefe bottle is triple distilled from barley grown on the farm, making it a 100% grain to glass operation.

“The launch of the Ballykeefe whiskey is the culmination of over 25 years work for our family," Mr Ging says.

"In 2016, we took the decision to adapt our traditional farming business and revive the longstanding tradition of small family farm distilleries in Ireland. Our operations are centered around our unique, high quality product, which is produced using leading technology to ensure eco-friendly practices and zero off-farm waste."

Ballykeefe’s Pot Still whiskey is distilled from a mixture of malted and unmalted barely, which traces its accidental origins back to the early 1800s, when efforts were made to reduce the use of malted barley when it was subject to punitive taxes imposed by the British.

“The limited release is a collector’s dream in terms of presentation, rarity and future value, for those who hold on to their bottle rather than drinking it,” says collector of rare whiskeys Dick Manogue.