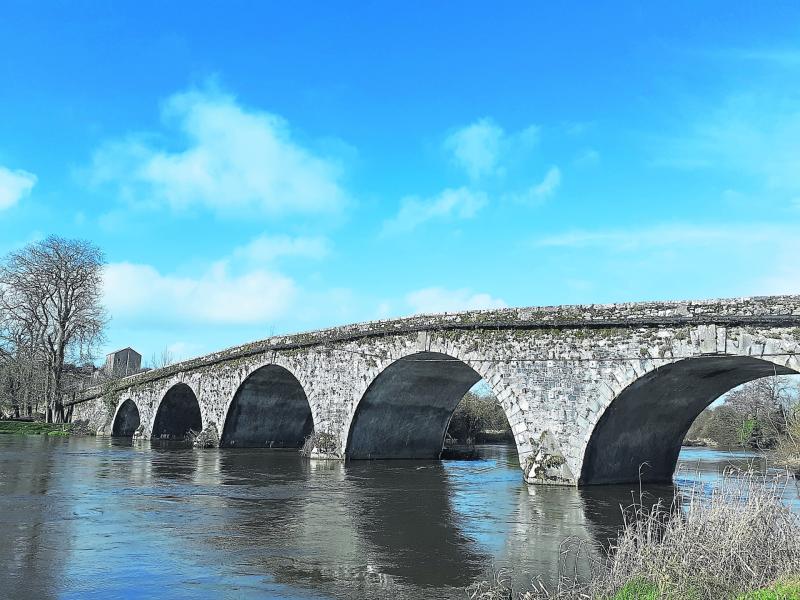 The bridge in Bennettsbridge

Pedestrian bridges over the River Barrow in Graignamanagh are essential because the George Semple bridge is ‘an accident waiting to happen’.
The warning came from local councillor Peter ‘Chap’ Cleere at the recent Callan Thomastown municipal district meeting.

Discussing potential tourism projects in the region, Cllr Cleere said he knew the bridge had been there hundreds of years but it ‘really is not safe’ for pedestrians.
“Pedestrian bridges over the river is a project they need to fast track,” he said.

There is a similar issue in Bennettsbridge, Cllr Patrick O’Neill said. It’s a busy spot and the bridge is not suitable for pedestrians. He echoed his colleague that it, too, is ‘an accident waiting to happen’.
He asked that a feasibility study be undertaken into the possibility of a pedestrian bridge being constructed in Bennettsbridge.

“It’s something that has to happen in some shape or form.” Cllr O’Neill said the biggest tourist attraction in the village is Mosse’s Pottery and that’s on the far side of the river. Walking across the bridge people are ‘taking their lives in their hands’.

Cllr Deirdre Cullen said she does not walk over the bridge in Bennettsbridge with her children because it is ‘absolutely lethal’.

Senior Engineer, Frank Stafford, said that as part of current planning consultants are looking at making Semple Bridge safer and funding for a pedestrian bridge in Graignamanagh.
Bennettsbridge presented a difficult situation for a pedestrian bridge, he said. The current bride is a wide-span, protected structure and on a flood plain.
Mr Stafford said he would come back to councillors on what might be the best way forward.