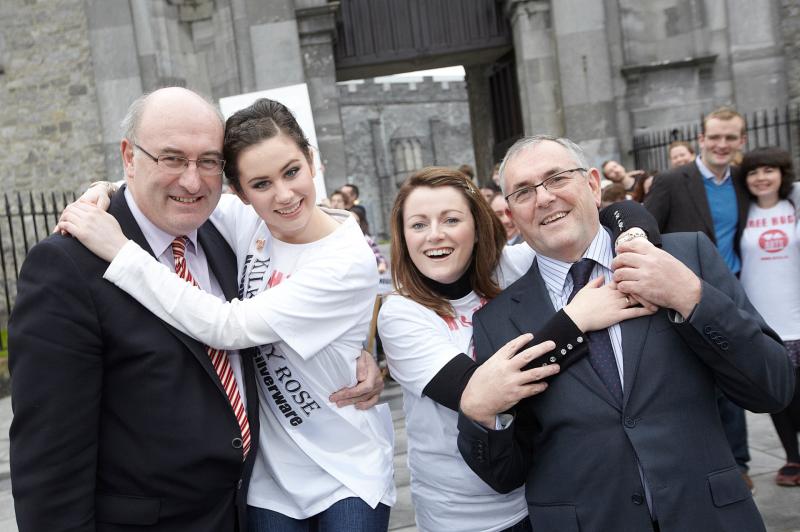 A flashback to the 2012 Hug Fest with then-Minister for the Environment Phil Hogan with Aoibhín Murphy, Rosemary Collier and John McGuinness TD Picture: Pat Moore

The inscription on the greeting cards reads: ‘The average person needs 300 hugs each month to remain healthy, happy and secure’ and inside, in my friend’s handwriting: ‘Good luck with
that, Gerry. Stay safe.’
Good luck indeed. 300 hugs a month! Not a hope in hell. Three hugs a month in this climate and one is doing well.
And then I remembered giving, and getting, almost 30 hugs in the space of one hour, all of nine years ago.
It was a hug fest to remember and it happened outside Kilkenny Castle, during lunchtime.
During that hour I found myself hugging actors, artists, set designers, theatre managers, poets and, surprisingly enough, politicians. I found myself hugging two local politicians - two prominent TDs as it happened, one a Minister - and I hugged them both with full knowledge and full consent.
Fast and Furious Hugs
No one had a gun to my head or a knife to my back although I feel sure the politicians were watching their backs (as all politicians do) as the hugs came fast and furious from all directions. Hugging the politicians was, I must confess, challenging - not because of opposing political idealogies but because one of them was taller, much, much taller than me. I really could have done with a step ladder to hug him properly.
There being no step ladder in situ, however, I found myself wrapping my arms around his lower back. That part of his back nearer his rear than his shoulder!
Not quite the hug either of us had envisaged. But we got through it.
So, what had gotten into us all that we were hugging each other, hugging and embracing politicians even, during lunchtime outside the Castle back in 2012?
Had we lost the run of ourselves? We had not. We were hugging for the Arts. Indeed some were making an art of the hugging as one would expect from folks involved in local theatre groups such as Barnstorm Theatre Company, Barn Owl Players, Devious Theatre, Young Film Makers and the Watergate Theatre. 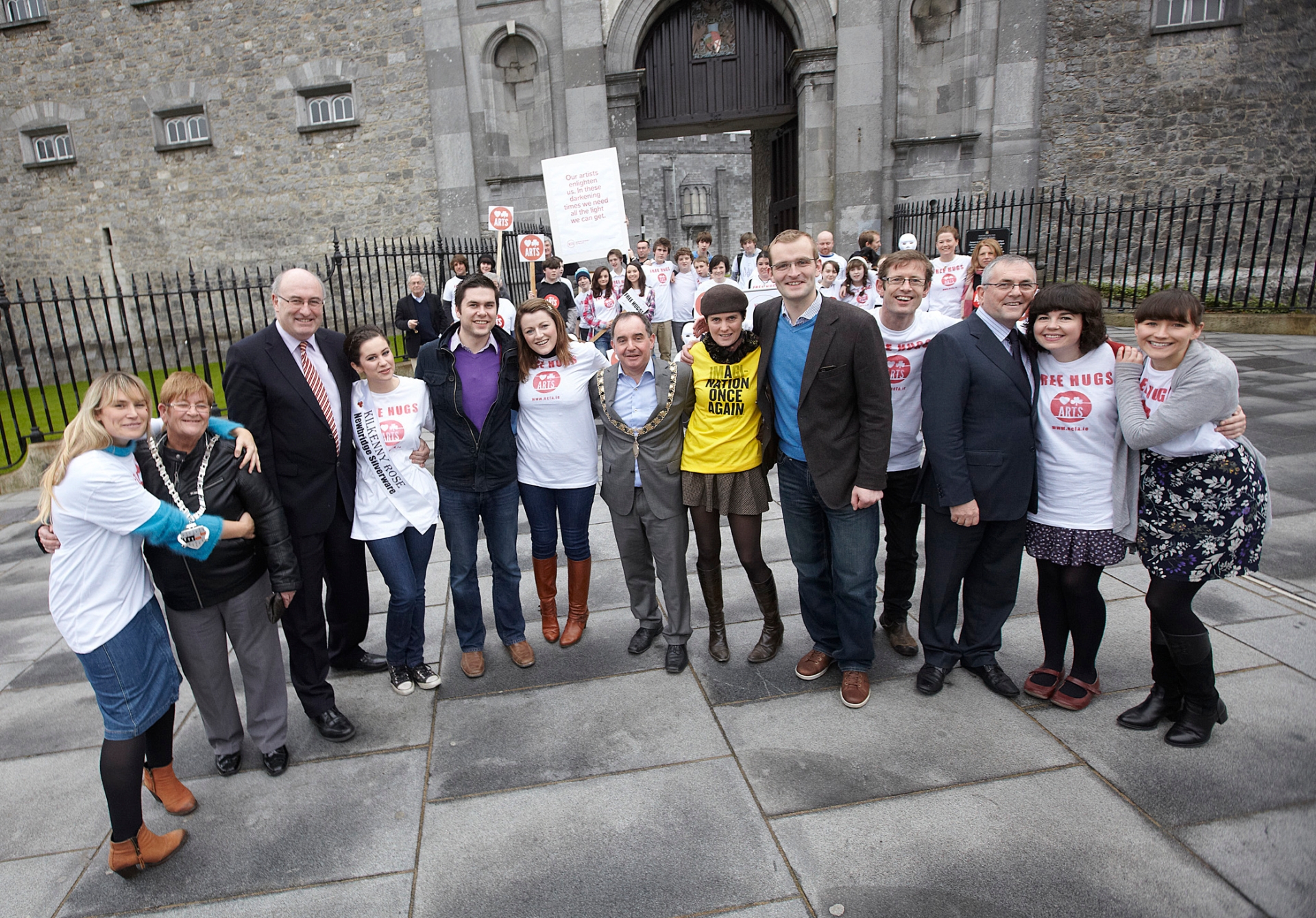 The hugging was part of the National Campaign for continued investment in the Arts, encouraging people to view the Arts, not as a burden on the exchequer, but as a vital and vibrant asset for communities.
As the invite from Kilkenny’s Arts Office read: ‘Embrace the Arts, and the artists, and show your support for the campaign for continued investment in the Arts.’
And I remember another hugging episode, from way back; no hug fest this but a hug famine. Almost. The poet Brendan Kennelly was giving a poetry reading the Newpark Hotel.
The hall was packed to capacity and there were quite a number of Leaving Cert students present as Brendan’s poems were on the curriculum.
Brendan Kennelly, loquacious and convivial as ever, held us spell-bound, he had us in the palm of his hands. So much so that when he finished, he calmly asked us all to stand and hug the person next to us.
I duly stood up but as those to my left and right were already hugging I turned around to hug someone, anyone, only to be confronted by a row of stony-faced, Leaving Cert students, sitting with their arms folded; these young men weren’t going to hug anyone.
And so I found myself standing to attention, and feeling a little embarrassed.
And then I heard her: ‘I’ll give you a hug.’ She was no more than 18, another Leaving Cert student who came forward and gave me a much needed redeeming hug.
Fast forward to 2012 and the hug fest outside the Castle where I embraced artists, actors, poets, and politicians and boy am I glad I did because thanks to Covid we’ll never see the likes of it again.
Cross examination!
In last week’s column I asked: where in Kilkenny was Croker’s Cross, St Ledger’s Cross and Scald Crow’s Cross?
Croker’s Cross was the old name for the Parade, an ancient cross stood at the intersection of the Castle Road, Patrick Street, Rose Inn Street and High Street.
St Ledger’s Cross was the name given to the intersection of Walkin Street, Parnell Street, New Street and Friary Street. It was called after Thomas St Ledger, who built a house on the site towards the end of the 16th Century.
Scald Crow’s Cross was the name given to the intersection of Walkin Street, the Old Callan Road and St Rioch Street. It later became known as the Lighthouse Cross.