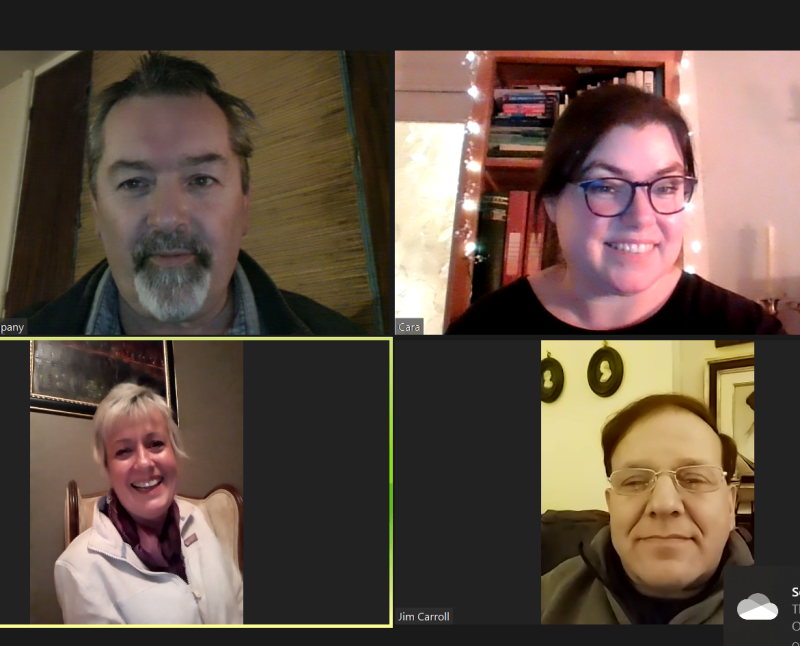 The production team behind Love in Lockdown II

Lockdown has placed restrictions on most aspects of people’s lives, but Barnstorm Theatre Company and Barn Owl Players continue to prove that even the most ardent of lockdowns has not put a barrier on the arts.
Beginning with their successful monologue virtual production, Zoom BOP: Confinement, last September, the two companies set out to up the stakes by producing, Love in Lockdown, a series of newly written short plays.
The plan was to produce five new works, but when the call went out for submissions, the calibre was high, and Love In Lockdown became a two-part event with five new short plays in each show.
Last month Love in Lockdown I premiered with almost 200 virtual audience members. This month, Love in Lockdown II hopes to emulate that success on April 29.
Local writers were tasked with writing plays on the multifaceted theme of love in lockdown. The submissions then went through a selection process by a team of panelists, Philip Hardy, artistic director of Barnstorm Theatre Company, renowned playwright Maeve Ingoldsby, and professional critic and Barn Owl Player committee member Cara O’Doherty.
Rehearsed online but filmed live following Covid-19 protocols, the five plays are diverse, exciting, and innovative.
The five writers are as diverse as their work. Here is a look at their background.
Carmel Furlong

Carmel Furlong left Wexford in 1984 and spent several years working and travelling in the United States. She moved to London, where her interest in acting began. She returned to Ireland in 1997 and pursued her acting training with Drama and Theatre Studies at UCC.
After a year, she switched to Film Making at St John’s College Cork, where she had the opportunity to put her acting skills into practice along with writing and directing her own work.
In 2014 she returned to Wexford to care for her parents. It is only over the past year that she has started to put her energies into a long-held dream to write.
This is Carmel’s second collaboration with Barnstorm and The Barn Owl Players, and she has thoroughly enjoyed the creative process once again.
Her play, Face Off, is directed by Brendan Corcoran, who is synonymous with theatre in Kilkenny. The play stars two actors familiar to all in the Kilkenny arts scene – Eoin Nangle Ryan and Delia Lowery Larkin.

Seamus D Norris lives in Piltown and is a systems business analyst with Glanbia in Kilkenny. He is married to Sheila with three adult children.
Seamus is a GAA fanatic and a long-time coach with Kilkenny hurling and Gaelic Football development squads and a Ladies Gaelic football coach.
His other love is writing, which has been reignited during the pandemic. Seamus became interested in writing from an early age.
He joined Piltown Macra Na Feirme, where he became interested in the one-act drama competition. The opportunity arose to write and direct several of the club’s plays in the annual competition.
Later, some of his plays earned rehearsed readings with theatre groups, including the Drama League of Ireland and KATS theatre group in Kilkenny.
He has written many short stories, some of which have been published by Ireland’s Own, as well as plays and even a song.
His play, Power of Love, is directed by Barn Owl Player Trish Brennan and stars local actors Paul McManus and Carri Doran.

Cathy Hogan is a writer from Kilkenny who has been living in Spain since 2019, where she writes the blog Surviving Coronavirus in Spain. Although this is her first play, when she isn’t cycling in the sun she is working on her next play and her first novel.
Cathy has travelled extensively around the world and worked on arts festivals for over two decades. She has won awards for flash fiction and screenwriting and is a periodic columnist with the Kilkenny People. In 2012 she graduated from NUI Galway with a BA in Creative Writing.
Cathy’s play Panic Stations is directed by Mag Whitely, a Love in Lockdown production team member. The play stars Nancy Rochford Flynn and Robert Holmes.

Lizzie Kelly is a 20-year-old student from Kilkenny. She is in her second year of her undergrad in English at UCC. She writes mainly poetry and has always liked creative writing. She has written Back Together Again and gives us an insight into the play.
“Two old school friends, Kate and Mira, are brought together by lockdown after many years apart,” she explains.
“However, the reunion starts to go sour when they begin addressing the reasons they fell out of touch in the first place.”
The play stars Rosey Hayes, who has written and directed in Barnstorm and Barn Owl’s previous collaborations. It also stars Orla McGovern, a facilitator with Kilkenny Youth Theatre, of which she is a past member. The well-known Don O’Connor directs it.

Tim Slight was born in Kent in the South-East of England and cut his acting teeth as a young school pupil playing the Artful Dodger in Lionel Bart’s Oliver and King Balthazar in school Christmas plays. Later, he performed in diverse plays from bawdy English farces to Greek classics such as Lysistrata.
Since arriving in Ireland in 2014, he has been regularly involved in the Kilkenny Arts scene starring in The Elephant Man, A Clockwork Orange and Shadow of a Gunman.
This is Tim’s second play. He really hopes you enjoy the Love in Lockdown plays.
Android Love is directed by Niall O’Riordan, whose play, Flat White, premiered in Love in Lockdown 1. It stars local actors Emer Peet and John Rice.
Love In Lockdown premieres at 7.30pm on April 29. The producers, writers, cast, and crew cannot wait for you to join them on the night.
For updates and viewing details, check the Barn Owl Players and Barnstorm Theatre Facebook pages.
This is a non-ticketed event, but people can support Love In Lockdown by making a donation at www.buymeacoffee.com/
barnowlplayers