Thomas Phelan was killed in War of Independence at his home farm in Ballyragget, aged 18 years 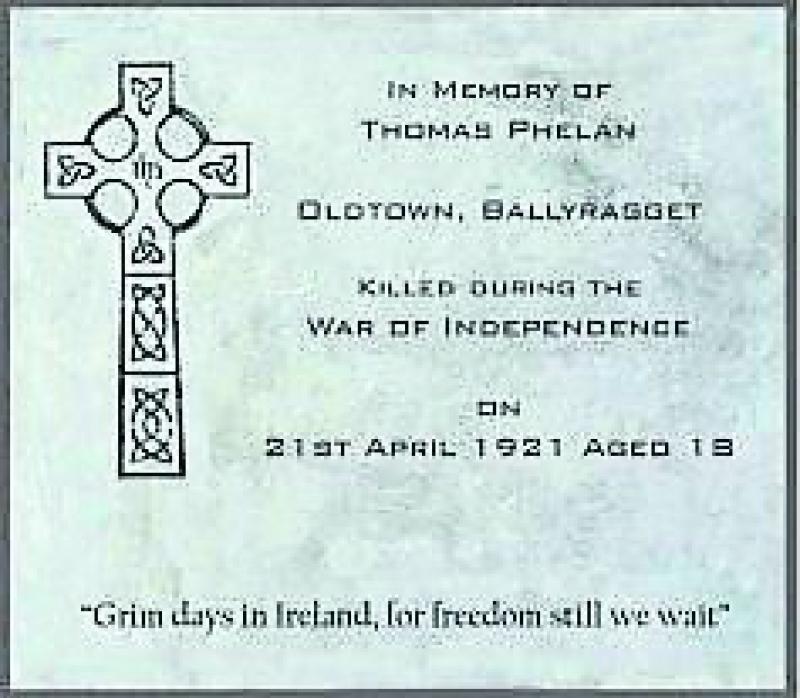 One of the plaques

Two new plaques are being unveiled in Ballyragget in honour of Thomas Phelan, an 18-year-old gunned down by British soldiers near his home 100 years ago yesterday (April 21).

The project is the culmination of hard work by the Ballyragget Town Development Association, Ballyragget Heritage Group and the family of the late Thomas Phelan, with the assistance of the county council.

Grand-nephew of Thomas Phelan, John O’Shea, says great credit is due to local groups, including Ballyragget Tidy Towns, who helped out, and the people of Ballyragget for their enthusiasm for the project. Unfortunately, due to the public health guidelines at present, there can be no large public gathering or unveiling for the time being.

Thomas Phelan was born in Oldtown, Ballyragget on June 4, 1902 - the youngest in the family, with three siblings. He attended Ballyragget Boys School.

On Thursday, April 21, 1921 Thomas had been recovering from a bout of the flu and felt well enough to cycle his bicycle into Ballyragget to get a newspaper and tobacco. Members of the Old IRA had blocked the road close to the railway bridge close to Oldtown.

On Phelan’s return from the village, he spotted two RIC men and two soldiers from a British regiment in the field near his house. Panicking, he dropped his bike and ran.

The armed soldiers shouted at him to stop but he continued to run. Two soldiers fired six shots at his back, and he fell behind a hedge nearby. His mother, Margaret, had come out of the house and was pleading with the men to stop, but it was too late.

Fatally wounded, the young man died within a few minutes. His body was taken into Kilkenny City as part of an inquest. His death certificate noted the cause of death was ‘shock and haemorrhage caused by a gunshot wound fired by the military in the execution of their duty’.

Now, a century on, Thomas Phelan's relatives have welcomed the erection of the memorial plaque at the Square in Ballyragget, and also one to be unveiled at Oldtown, in his honour. They applied to the council’s Civic Memorial Committee in order to progress matters, and were assisted by local councillor Michael McCarthy.