Outdoor socialising in Kilkenny paramount this summer - but which areas will suit? 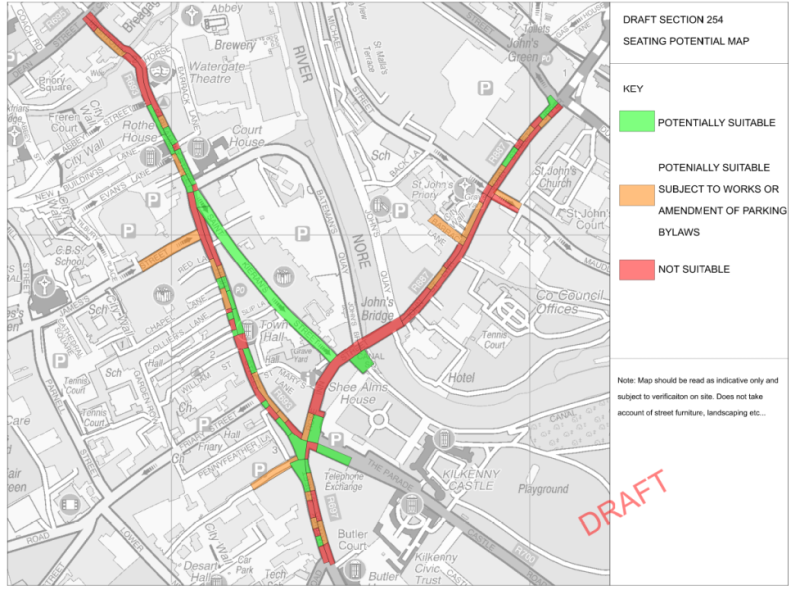 Socialising outside will be paramount this summer if Covid cases are to remain low and further lockdowns are to be avoided.

Kilkenny County Council has created public outdoor seating at The Watergate, The Market Yard and The Mayor’s Walk which has been widely welcomed. The one-way system in the city centre also looks set to remain to allow for physical distancing.

As society cautiously moves towards further reopening all eyes are fixed on how how hospitality might be permitted to return over the coming months.

Outside Dining
Director of Services at Kilkenny County Council, Tim Butler explained that premises can apply for a licence to allow outside dining. Mr Butler said that the map (shown above) is an indicative map only for application for licences for seating outside businesses and that the local authority will review all applications on their own merits.

The map illustrates through the use of colour-coded zones what areas of the city are considered suitable for outdoor dining. Green areas are considered to be suitable.

Amber zones are potentially suitable subject to works and amendment of parking bylaws and red areas are considered unsuitable. For an area to be considered suitable there has to be at least two metres of footpath to allow for adequate room for pedestrians.

Meanwhile the Chairman of the Kilkenny Vintners Federation, Anthony Morrisson, is calling of all sectors of hospitality to reopen at the same time.

“The government need to open it all together, it will be detrimental if they don’t do it that way,” he said adding that if only certain premises are allowed open that could create ‘an atmosphere of tension’.

The chairman said if the government reopens hospitality on a staggered basis then premises that are forced to remain shut should be compensated accordingly.

Mr Morrison said that the government needs to align with Northern Ireland and the UK who are opening pubs over the coming weeks.

According to The Vintners Federation pubs in Northern Ireland will reopen for outdoor trading this Friday then three weeks later they can resume indoor business. A similar scenario in the Republic would see outdoor resume on May 28 and indoors on June 18 (assuming a four-week lag in ROI vaccinations compared to the North).