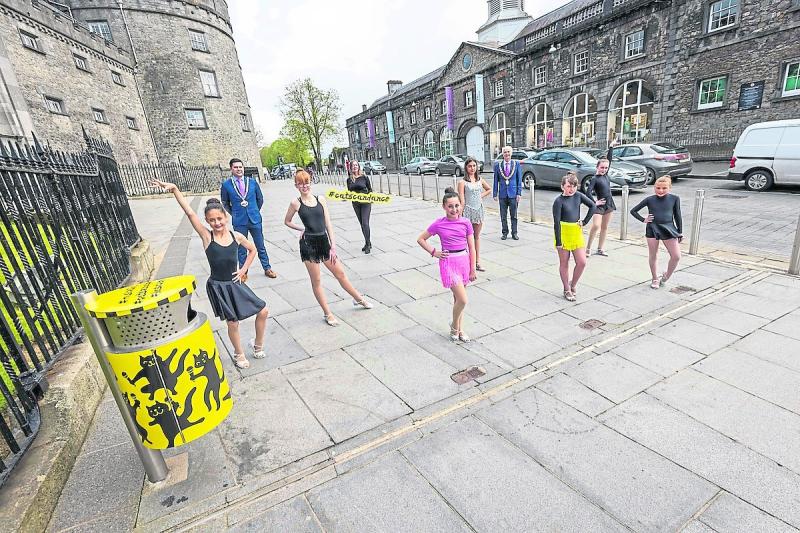 The new musical bins have been a hit on the Parade PICTURE: DYLAN VAUGHAN

I love a bit of imagination. A bit of innovation. That’s why I love the musical litter bins on the Parade.
Have you seen them yet? Or rather, have you heard them?
Seeing them is just half the experience - hearing them completes it.
Of course you’ve got to get up close and personal, so to speak, with the bins in order for them to ‘perform’. Ideally you toss in some litter and the musical bins belt out what sounds like a short, snappy Glenn Miller number that gets your feet tapping.
Short though the burst of music is, it’s catchy and jazzy. In fact I could see Scott and Zelda Fitzgerald bopping around to it (as I say, I love a bit of imagination).
And of course you too can do a little dance if you wish, after all ‘catscandance’ is inscribed on the top, along with ‘musical bins’ and ‘bosca cheoil’. The purpose of the bins, I assume, is to encourage people to toss their rubbish in the litter bins – and for sure there’s a big build up of litter on the Parade now thanks to the installation of those limestone picnic tables, another great idea, by the way, and boy did they come in to their own during Covid.
Of course you don’t have to dump litter to get the ‘bosca cheoil’ to perform. Just sidle up to it – and breathe heavily (kidding) – and away it goes.
And they’re painted in our Kilkenny colours: black & amber.
Which makes me think, now that the hurling season is back in swing (music to my eyes and ears) what about installing ‘singing bins’ that belt out our hurling anthem: ‘The Rose of Mooncoin’ And fair dues to Brian Cody for getting us off to a good start against Dublin.
How’s this the Irish sean fhocail goes: ‘Tús maith, leath na hoibre’ (a good start is half the battle) Oh, and that was another innovative idea on the Parade some weeks back – the inscribing of Irish sean fhocails all along the paving from the horse trough up to the Castle.
Initially I thought they were permanent until I realised it was for Seachtain na Gaeilge only. Pity, as I was going to urge our Leaving Cert students to visit the Parade on their lunch break and enjoy a baguette while memorising a few sean fhocails because in my Leaving Cert days if you could drop a few sean fhocails into your aiste or oral exam you were sure of a few extra marks.
In conclusion, these ‘busking bins’ (you toss them rubbish instead of money and they perform) add a bit of colour and sound to what at times can be a bleak Parade.
And what else, I wondered, could we infuse with music to bring a bit of jollity and fun to our city streets? Parking meters perhaps seeing as how we’d rather not have any dealings with them. You pop in your coins, out comes your ticket accompanied by a blast of that classic Beatles song: ‘Lovely Rita, meter maid’ just might bring a smile to our faces (wouldn’t care to be paying the royalties!)
And maybe a bit of music wouldn’t go astray while folks are waiting at bus stops and sure what could be more appropriate in that scenario than the Hollies’ famous 60s hit: ‘Bus Stop’.
And then I had this mad notion that ‘musical chairs’ might be introduced at Corporation meetings – just to allay the boredom and the unlikely possibility of any member dozing off. A mad notion for sure. But I like it.
In the meantime a few of my own suggestions to enhance Kilkenny now that some tourists may descend on our lovely city, a busload of Americans hopefully (although Dubliners, Corkonians, Galwegians, anyone, would be equally welcome) mad to spend their Covid savings.
First off, how about infusing the water fountain in the Castle Park with perfume? That’s right - perfume!
What fragrance? Oh, who cares, but a nice lavender scent wafting around the Castle Park would be pleasant, and novel, for the visitors strolling about.
I also suggest placing some table cloths, nice white starched ones, on those lovely limestone picnic tables along the Mayor’s Walk which are hugely popular and well utilised. Okay, maybe a few oil cloths will do instead - damn it I wouldn’t want the Corpo running up a huge laundry bill.
Oh, and maybe as a special treat (Bank Holiday Weekends and so on) table service could be arranged from the nearby ever popular stalls on Farmers Market Day when the tables are in great demand – they’re so popular on Thursday (and Saturday now) that you’d nearly want to book a table!
In the meantime, keep an ear out for the buskin’ bins.