The Commitments - 30 years on and still going strong! 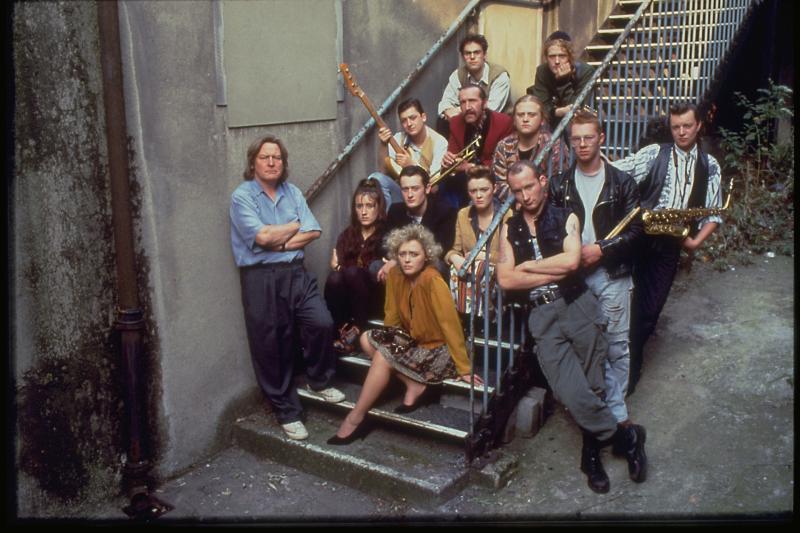 It’s a long time ago now (30 years actually) since I sat, not more than two metres across from Angeline Ball, she of The Commitments (Imelda Quirke) fame, and asked her: “What’s it like to be a sex symbol?”
Angeline Ball, and I tell you no lie, blushed and didn’t quite know what to say. Who came to her rescue was the late Alan Parker, director of the movie The Commitments, who was also sitting across from me.
“But you now are a sex symbol whether you like it not, Angeline,” he gently interspersed.
And she was.
The year was 1991, I am on a year’s leave of absence from teaching and I am producing (and broadcasting) the Arts programme, and a magazine type show, Saturday Miscellany, for KCR – Kilkenny Community Radio.
I was pleasantly surprised and more than chuffed to receive an invite to the premiere of The Commitments in the Savoy Cinema in Dublin.
On entering we, the media, were given a brochure containing photographs of and information about the cast and the background to the film.
Accompanying that brochure was a small, slim dictionary (about the size of a postcard) explaining Dublin slang and swear words! I smiled at that. Laughed actually.
The miniature dictionary was primarily for the benefit of the American media as The Commitments first premiered at the Pacific Design Centre in West Hollywood in August, 1991.
Anyway, I was, to resort to that god-awful cliché, ‘blown away’ by The Commitments. I absolutely loved it. Loved the story line, the acting, the humour, the irreverence, and, of course, the music, not least the stunning vocals of teenager Andrew Strong who looked larger than the larger-than-life character (Deco Cuffe) he played in The commitments on the large screen. Andrew’s dad, Rob, is no stranger to Kilkenny, of course - he’s been rocking it out in Tynan’s and The Field for several years. Oh, and who’s that I spotted – a former pupil of mine, Canice Keneally (of Engine Alley fame) in a cameo role, auditioning to be in the band, The Commitments, at Jimmy Rabbite’s back door.
All of this came flooding back to me as I watched The Commitments on TV the other night and loved it every bit as much as that first screening back in 1991 after which we, the media, met with the cast – hence my question to Angeline Ball (and boy was she eye-catching).
Apart from some other questions I asked Roddy Doyle, author of The Commitments on which the movie is based, if he thought the film would go down well ‘down the country?’(it is, after all, a totally Dublin-based movie).
Roddy wasn’t impressed. And understandably so. The Commitments didn’t just go down well down the country - it went down well in every country it played in, the sound track (still a prized possession) selling a mere 12 million copies!
ZITTI E BUONI
April 1974. I am with my girlfriend and a few others in a basement flat in Kenilworth Square in Dublin watching the Eurovision Song Contest (were we students wild or what?).
We’re all rooting for Ireland’s entry ‘Cross Your Heart’ sung by Tina Reynolds but also voicing our opinions as to who else could possibly win. Out of the 17 entries my girlfriend fancies Waterloo by some Swedish group called Abba.
I find Abba’s costumes ridiculous and reckon they haven’t a chance; I fancy Olivia Newton John, representing Britain, with Long Live Love. We argue.
And you all know what happened after that. The four in the ridiculous costumes won and became one of the most popular music acts of all time. So much for my musical judgement!
Fast forward to Saturday night’s Eurovision Song Contest and another group, dressed (if even) in crazier costumes than Abba and who couldn’t even sing for godsake ,but win with a song (a noise) called Zitti e buoni meaning ‘shut up and be quiet’ (and how I wished they would).
I knew nothing about Eurovision back in 1974. I still know nothing. And you know what I like most about the Eurovision Song Contest now – the theme music!
PS Was Waterloo the waterloo of my 1974 relationship? Possibly. Three months later I secured a teaching post here in Kilkenny and we went our separate ways. Without ‘commitments’!