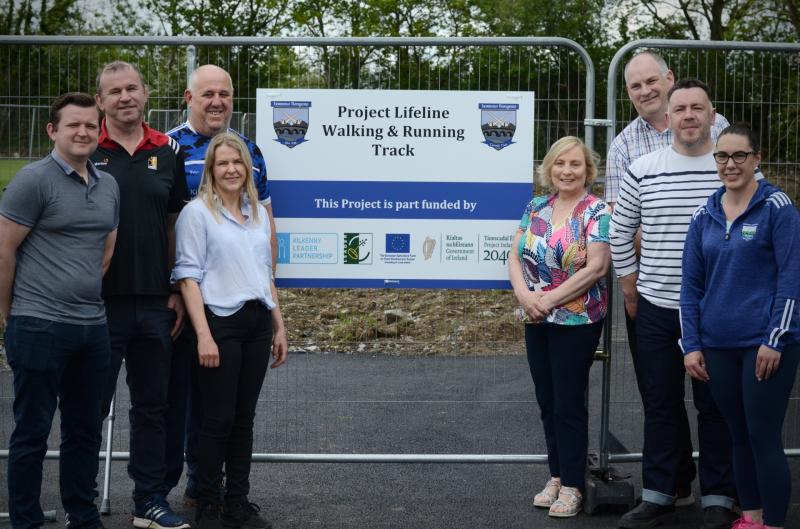 There's delight in Paulstown and Goresbridge communities with the completion of a new walking and running track around the sportsfield in Paulstown.

Barrow Rangers has announced the delivery and completion of Project Lifeline – Walking and Running Track - a two-metre wide tarmac running / walking track which has been constructed on the perimeter of the existing sportsfield.

Soft play elements delineated with thermoplastic markings are situated at various locations along the track and are complemented with a chess board, boules court and basketball hoop. On September 3, 2020 Kilkenny Leader Partnership approved the contractor Penturf Limited and confirmed 75% of grant aid towards this project which equates to €69,772.70.

"Project lifeline is the first major milestone delivered from the €1.2 million development project we launched back in October 2018 and we hope that it will bring great enjoyment to the people of Paulstown and Goresbridge," says Jim Flavin, Chairman of Barrow Rangers GAA Club.

"We purchased an additional seven acres of land last December adjacent to the existing pitch and would hope to commence preliminary site works later this year."

Similarly, Mary Galway, Chairperson of Barrow Rangers Camogie Club said: “Project Lifeline is a wonderful community initiative which will benefit all the people of Paulstown and Goresbridge and is an enhancement to the whole area."

Project Lifeline was designed and supervised by BR member and local Daithi O’ Troithigh from Doyle and O'Troithigh Landscape Architecture. The success of this project - according to Project Lifeline Chairperson Catherine Mahon - 'can be largely attributed to the tremendous assistance, and support from Mags Morrissey coupled with the funding from Kilkenny Leader Partnership, which we are very grateful for'.

During the autumn of this year, native tree species will be planted at various locations along the walking track route in order to promote and enhance a greener environment and which will involve the participation of the school children of Paulstown and Goresbridge in the design, selection and completion of the planting scheme.