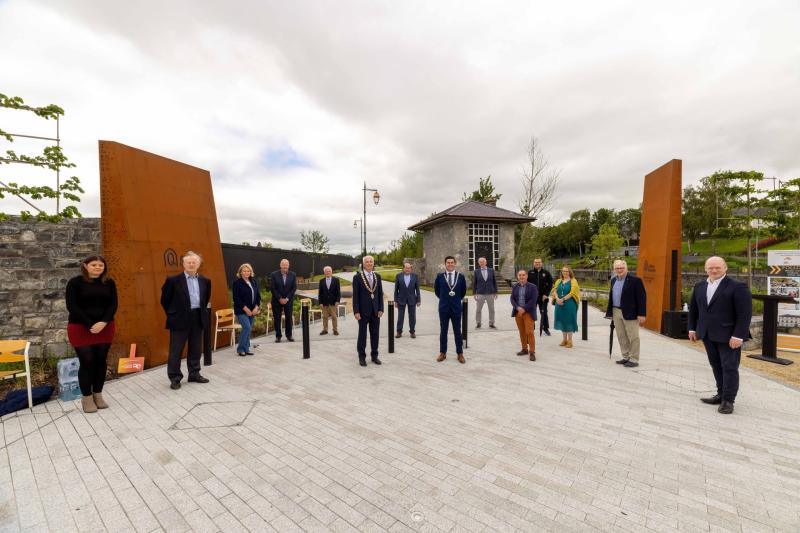 Marrying the old with the new, the riverside garden leads us through the former St Francis' Abbey Brewery and into a modern skatepark that has been designed for and by our own skateboarding community who now have a park of their own

The project provides a riverside walk from the Tea Houses at Bateman Quay to Greensbridge, with a temporary walkway provided in the area of the planned new Urban Park around St. Francis Abbey.

The Riverside Garden project incorporates the newly completed skate park, which opened to the public on May 1. The amenity is already well used by skaters of all abilities and ages.

It was officially opened by the Cathaoirleach of Kilkenny County Council Andrew McGuinness and the Mayor of Kilkenny John Coonan this afternoon who described it as 'great day for Kilkenny'.

"Today is a great day for Kilkenny as we get to officially open this fantastic riverside garden, with its beautiful walkway and seating along the banks of the Nore, opposite our Peace Park and Great War Memorial, overlooked by the castle on one end and St Canice's Cathedral on the other, with St Francis Abbey in the middle," said Cllr Andrew McGuinness.

"It certainly takes full advantage of its surroundings and reminds us just how lucky we are are to be surrounded by so much history and beauty in Kilkenny."

Praising the project, Mayor of Kilkenny John Coonan said: “I can see the Riverside Garden and Skatepark becoming a focal point to be enjoyed by the people of Kilkenny City and a welcome addition to what Kilkenny has to offer to visitors as we welcome them back to the City”.

The completion of this stage of the project provides members of the public with their first opportunity to access the former Brewery site and is the first of a number of projects that will integrate the former Brewery Site into the City.

Welcoming the opening of the Riverside Garden and Skatepark, Colette Byrne, Chief Executive of Kilkenny County Council said:  “Today is a very positive day for Kilkenny as we open this beautiful public space being the first stage of the public realm development of the Abbey Quarter site. While today is a major step forward, we have many more steps to take to complete the vision for the Abbey Quarter. I look forward to working with the Elected Members of Kilkenny County Council and our funders over the coming years to realise this vision.”

Mr. Tony Lauhoff, Senior Engineer, said: “This wonderful addition to the public realm in Kilkenny City would not have been possible without the significant support of our funding partners -  the Urban Regeneration & Development Fund through the Department of Housing, Local Government and Heritage, European Regional Development Fund through the Southern Regional Assembly and Fáilte Ireland.  I am sure they are proud of what their funding has delivered. ”

Whilst the Riverside Garden project provides a significant extension to the riverside walkways through the city, plans to extend this further to provide connectivity under Greens Bridge, connecting with the Linear Park at Bishops Meadows/Riverside Drive are also currently being progressed with funding from the Urban Regeneration and Development Fund.  A feasibility study will be undertaken and if found viable, we will move ahead to design and planning for this connection.

Cllr. John Sheahan, Cathaoirleach of the Southern Regional Assembly said, “I congratulate Kilkenny County Council on the successful delivery of the Riverside Gardens and Skatepark and how they utilised EU funding from the ERDF the S&E Regional Programme 14-20, managed by the Southern Regional Assembly. Projects such as this are a great example of how our EU membership directly benefits our regions and local communities.”

Brian O’Flynn, Head of Ireland’s Ancient East at Fáilte Ireland said, “After a very challenging year for tourism, and as the continued safe reopening of the tourism and hospitality sector in Ireland progresses this week, it is wonderful to see an outdoor amenity like Kilkenny River Garden opening to welcome visitors. This amenity will further enhance the rich cultural and heritage experiences of Kilkenny City and the wider Ireland’s Ancient East offering.”